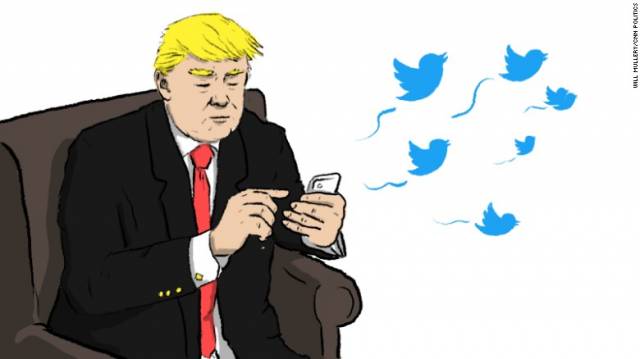 Should we really be reporting everything Trump tweets?

Every morning, a bleary-eyed Washington Post reporter drags his or herself out of bed bright and early, makes some coffee and is dutifully seated in front of the computer by 6 a.m. With the watchful eye of a sentinel, the reporter waits for President Trump to tweet and with the speed of lightening will type up an article that will be posted online immediately.

In the digital age we live in, speed is everything and failing to respond swiftly to the president’s latest online rant means traffic on the newspaper’s website will plummet. “If we’re 20 minutes late we lose audience,” says The Washington Post’s White House Bureau Chief Philip Rucker.

The honorable duty of reporting on Trump’s latest Twitter onslaught is known within The Washington Post as “the hot seat.” “They say Trump tweets while on the toilet in the morning, so the running joke among reporters who cover the White House is: ‘When’s the next shit-storm with tweets coming?’” says Michael O’Donnell, chair and professor of communication and journalism at St. Thomas University.

Trump’s most widely reported Twitter rants include his attack on MSNBC hosts Joe Scarborough and Mika Brzezinski, whom he referred to as “psycho Joe” and “crazy Mika.”

O’Donnell believes that Trump’s fascination with Twitter is one of the features that make him a textbook example of populist leadership, as it enables him to communicate instantly with the masses without holding press conferences or making statements to the media, which he has repeatedly accused of producing “fake news.”

But are people paying attention to Trump’s tweets merely because we’re reporting them? “Trump’s tweets are not capturing people’s imagination; they’re capturing the imagination of journalists, particularly cable TV news journalists. I don’t think he’s exerting influence through his tweets; he’s able to influence through what you guys are saying about his tweets,” says Joseph Uscinski, a political science professor at the University of Miami.

However, The Washington Post Media Columnist Margaret Sullivan, points out that no matter how nonsensical or vacuous they might seem, “they’re presidential statements and you can’t just ignore them.” They’re also like a direct line into the most powerful head of state’s brain, which can be fascinating and scary at the same time.

Beware of reporting the latest Twitter rant without any context or proper fact-checking to debunk lies and false accusations, though, as doing this means the media indeed runs the risk of dancing to his tune. “I do worry that reporting all of this is enhancing his ability to change the conversation,” says Politico’s Editor-At-Large Peter Canellos.

When tweets containing slurs and insults are reported over and over again by news organizations all over the world, the media is also helping to hammer home negative messages through the sheer force of repetition. “Trump’s an expert at denigrating his opponents with phrases such as ‘crooked Hillary’ or ‘lying Ted Cruz’. If you characterize someone and say it over and over again people start thinking there’s something there,” says O’Donnell.

Media outlets such as The Washington Post and Politico have teams of fact checkers to help the reporter on “hot-seat” duty by quickly checking the veracity of Trump’s assertions and pointing out innacuracies when necessary.

While some tweets have been proven to be factually incorrect, others, if reported without context, can cause unnecessary alarm. “When Trump tweeted about North Korea and talked about fire and fury, we felt compelled to tell people that there was no sign of that sort of build-up that would actually lead to fire and fury despite the language being used,” says The New York Times’ Assistant Masthead Editor Carolyn Ryan.