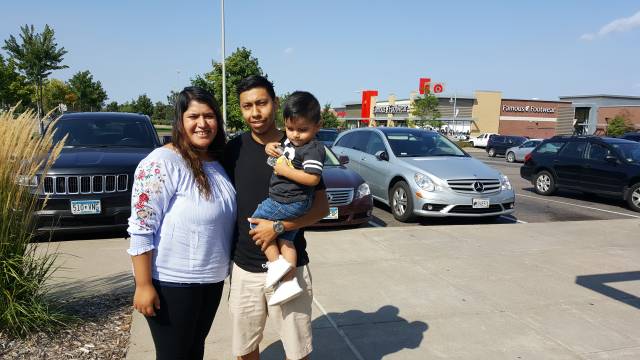 For young immigrants, a dream in pause

It has been more than a decade since Jaime Ramos left Mexico to live in the United States. There are almost no memories left of his home country now. Among the few exceptions is the vivid experience of his 9th birthday.

He was in a hotel at the border waiting for a second opportunity to get to the other side. The first try had failed after his mother passed out on the way, which doubled the price his father had to pay the Coyotes to get both to Minnesota. He spent his day studying the new name he would get with the documents provided for his American life. The arrival was possible thanks to an unknown lady, who decided to help. He crossed the border in the trunk of her car, playing video games with his Game Boy.

Jaime Ramos is 22 now. He got married near Minneapolis three years ago. His wife, Vania Ramos, was also born in Mexico and is now the mother of a 1-year-old American boy. Jaime and Vania are both recipients of DACA (Deferred Action for Childhood Arrivals), a program enacted by the Obama administration in 2012 that allows foreigners who arrived in the country illegally as children to work. They are known as “Dreamers” and are facing a period of strong uncertainty regarding their future. President Donald Trump announced last week that the program will only last for six more months and called on the Congress to act in order to keep DACA alive.

The threat of deportation means that the couple might have to give up their jobs and careers, a major setback for their dream of a better life. As a saleswoman at a car dealership, Vania uses her bilingual skills to help clients who only speak Spanish. Jaime works for Best Buy. As a coordinator at a warehouse, he makes almost three times as much as when he worked at McDonald’s prior to the DACA. His goal is to become a supervisor. “They have plans for me,” he says.

Best Buy is willing to quarrel with Trump’s decision. It has joined the group of almost 400 companies that signed a letter to the president warning that the “Dreamers” are vital to the economy.

“All DACA recipients grew up in America, registered with our government, submitted to extensive background checks, and are diligently giving back to our communities and paying income taxes,” Best Buy Chairman and CEO Hubert Joly said in a statement.

Rather than ideology, it is a pragmatic approach. In states like Minnesota, studies show that in the future, migration will play an important role to counter a labor force slowdown. With the unemployment rate at 4.4 percent in the United States, it is a problem that some businesses already face.

“For every job, there is maybe one or two people possibly qualified to work. That is not very many,” says Gail Desmet, the human resource manager at Page 1 printer in southwestern Minnesota’s Murray County.

Trump’s moves indicate that he might be aware of this need. That explains why he exhorted Congress to act. For Jaime and Vania, leaving the responsibility to legislators is just too risky. What if they fail? Their dream is now in pause.

Read more about the “Dreamers” in Portuguese here