News on weather and extreme weather conditions interest people more than ever, and the Miami Herald notices. Even stories on the popularity of weather news attracts online readers. I will come back to this later.

But first, let me introduce you to The Miami Herald Reporter David Ovalle, a true storm reporter. He has covered over 15 hurricanes or other natural catastrophes during his more than a decade career at the newspaper.

With Irma, he says he was the only media at place in Key West, where the hurricane hit worst. Read more on Irma here, and the more recent hurricane Maria here.

No wonder, besides reporting to the Herald, Ovalle gave around 60 eyewitness interviews to other media outlets. Besides sharing the information, it’s good advertising for the paper.

This is Ovalle’s guide how to get your work done in a hurricane:

2. Instead of pens, take with you pencils and a sharpener. Why: pens hate rain.

3. Mobile phones tend to die, so rely on landlines and/or a satellite phone.

4. A battery operated headlight is often a very convenient accessory.

5. Of course, stock up with plenty of water, gas and food. 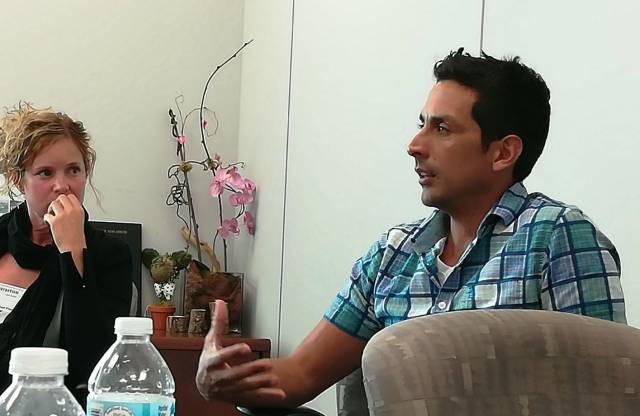 Never before has The Miami Herald gathered so many people online than with Irma.

This time, the focus was mostly on reader’s questions and worries, says Aminda “Mindy” Marqués Gonzalez, executive editor of the Miami Herald. “Where can I get water and gas?” and “what is the route of the hurricane” were some of the questions answered.

The Washington Post took a step further and helped many, no matter location, to understand indeed how big Irma was. I noticed from my Facebook feed that this piece of journalism was very popular not only in the United States, but all over in Europe, for example.

Besides the extreme weather conditions, everyday weather reporting keeps newsrooms busy for the simple reason that people can relate to these stories, and therefore gather many clicks. This summer we at the Finnish Broadcasting Company even published a news story where we tried to find a reason to this never-ending interest. Readers even found this story interesting.

Back to The Miami Herald. Marqués Gonzalez hopes the hurricane season will be over. Until that, dark humor will help journalists to cope. “We have had José, then we’ll have Maria, and then we only need Jésus,” she says.