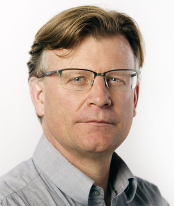 Michael’s long career in journalism spans print, radio and television. Currently, he is a senior broadcast producer and reporter for Reveal from the Center for Investigative Reporting. He has led collaborations with the Associated Press, the International Consortium of Investigative Journalists, Frontline, NPR and others.

Previously, he was a correspondent for American Public Media and a producer at CBS News. Michael began his career in Eastern Europe after completing a Fulbright Fellowship. He covered the fall of communism and wars in former Yugoslavia for the Daily Telegraph and Los Angeles Times.

His investigations into human rights abuses in the Balkans led to the creation of a new war crimes court based in The Hague.

Michael’s honors include Alfred I. duPont-Columbia University gold and silver batons and Edward R. Murrow, Peabody, IRE and Overseas Press Club awards. He is a graduate of Macalester College.