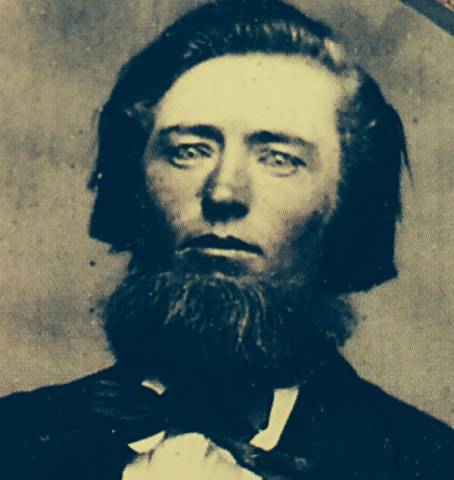 Diabetes deep fried on a stick

In one of the early books of the series Little House on the Prairie, On the Banks of Plum Creek, Laura’s father Charles Ingalls travels hundreds of miles away to find work after grasshoppers destroyed their crops.

It’s around Christmas and on the way back he gets caught in a horrendous blizzard. He survived by digging himself into a snow bank and by eating all the Christmas candy he bought for Laura and Mary. At one point the blizzard lulls and he spots the light from a lamp in a window and realizes that he is just a few meters from his house.

No Christmas candy for Laura and Mary, but at least their father didn’t turn in to a human icicle.

Candy was in short supply for ordinary people in the 1870’s.

If we fast forward 140 years or so, the scarcity is replaced with abundance. Processed food and candy (sometime its difficult to detect a difference if you read the labels on say yoghurt or a cereal box) is everywhere and it’s ridiculously cheap.

Yesterday I chatted with to local girls at Matt’s Bar – a Minneapolis landmark established in 1954 and home of a fantastic burger with cheese stuffed in the patty. The girls advised me to go to the State Fair. They said that it would be a day of food sin but a must for anyone who is in Twin Cities at this time of year. 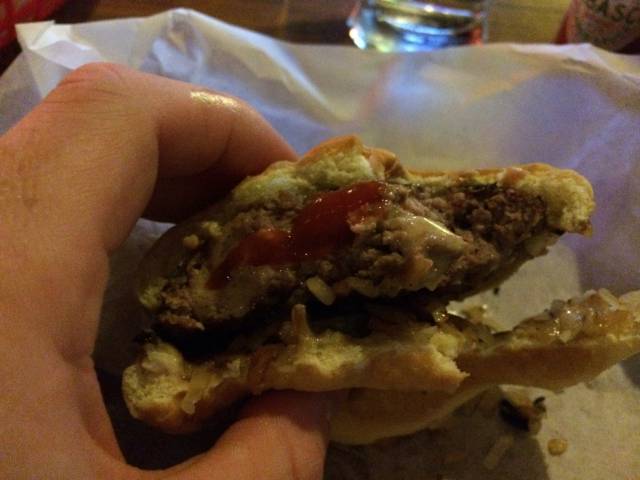 Jucy Lucy is a cheeseburger that has the cheese inside the meat patty.

So I went to the Minnesota State Fair.

Here the masses stand in line for disturbing or delicious inventions like deep fried Twinkies, deep fried apple pie and deep fried candy bars – and don’t worry meat fans – there is also bacon on a stick and bacon ice cream. Everything you can imagine is within grasp and deep fried on a stick.

But why stand in line for something that is so clearly not good for you? Because it makes us feel good. New York Times reporter Michael Moss points out in his 2013 bestseller “Salt Sugar Fat: How the Food Giants Hooked Us” that our bodies are hard-wired for sweets.

“The entire mouth goes crazy for sugar, including the upper reaches known as the palate. There are special receptors for sweetness in every one of the mouth’s ten thousand taste buds, and they are all hooked up, one way or another, to the parts of the brain known as the pleasure zones, where we get rewarded for stoking our bodies with energy,” the first chapter states. 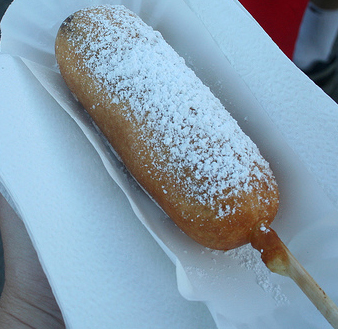 Last week I had the chance to talk to one of the largest providers of sugar, salt and fat for the food industry, Cargill. The company is the biggest privately held company in the US. Corporate Vice President, K. Scott Portney, denied that sugar addiction is real and stated that it’s all about choosing to eat healthy:

“Fat in itself is not bad for you. Neither is sugar and neither is salt. Overconsumption of any of those things is a challenge.”

But it seem that the ability to choose not to over consume processed food is a difficult challenge for many – me included. At the State Fair the severe obesity problem becomes as real as gravity.

The State Fair is not alone, far from it. In 2012 it was revealed that fifteen times more troops were discharged from the US Army due to obesity than five years prior.

In late spring a study published in the journal of the American Medical Association showed us some of the consequences of obesity and pointed out that both type 1 and Type 2 diabetes are significantly rising among young people in the United States. Between 2001 and 2009, Type 1 diabetes rose 21 percent among children and teenagers and Type 2 diabetes increased 30 percent.

The World Health Organization is now recommending that people consume less than five percent of their total daily calories from sugars. It is half of their last published guidelines from 2002. Thereby the new standard says that an adult should eat less than six to seven teaspoons. A can of Coke has more than 10 teaspoons of sugar and one Twinkie (not deep fried!) is four.

On a news conference in march Dr. Francesco Branco, head of nutrition for health and development at WHO, warned the public: “Sugar might become the new tobacco in terms of risk.”

It might just be a matter of choosing the apple instead of the deep fried apple pie, but many things comes in to play on how effective we are at making those choices. 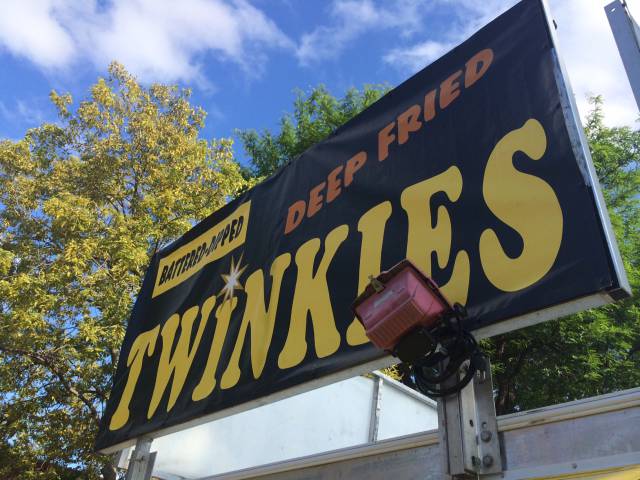 The deep fried Twinkie stand at the fair.

I didn’t have a deep fried twinkie, apple pie or candy bar at the fair. Perhaps it was a result of strong will or maybe it was the delicious Jucy Lucy that temporarily had demolished the craving for salt, sugar and fat.

I will never know. Guess I need to revisit the next State Fair to know for sure.