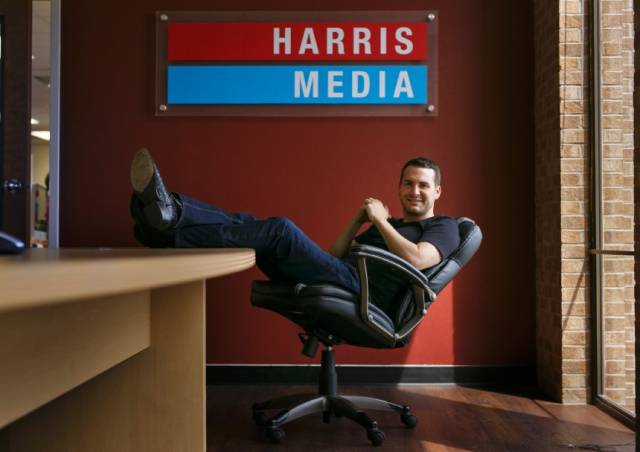 Is it OK for advertising and political campaigns do anything that’s possible? Or, should there be barriers? A visit to the Texas-based advertising agency Harris Media shows how far agencies and political parties are willing to go.

Vincent Harris founded the agency in 2008. Bloomberg News crowned Harris as “the man who invented the Republican Internet.”

Our group doesn’t get to meet Harris himself, but rather his assistant Chase Campbell, a young, good-looking Texan. Confidently, he speaks about the successful agency.

With its provocative and aggressive campaigns, the agency has contributed to the success of a number of controversial politicians. It has also aligned with the U.K. Independence Party, or UKIP, which promoted the successful Brexit campaign last year, and with the ruling Likud party in Israel. And the firm completed projects for Trump during the Republican primaries.

Chase Campbell was very talkative, until Germany came up. It quickly became clear he did not want to talk about Germany and German clients, including the polemical video produced before the November U.S. election for a neoconservative nonprofit, “Secure America Now.” This video took aim at Germany, portraying the country in a panicked state overrun by Muslims — cathedrals transformed into mosques, Oktoberfest void of alcohol. The video is called “Welcome to the Islamic State of Germany.” The agency apparently wanted to be provocative by crossing borders.

Not surprisingly Harris Media also has begun working with the Alternative for Germany, or AfD, the far-right party poised to enter the German Parliament for the first time after the elections on Sept. 24. The AfD has already very provocative advertising. The party’s election posters are designed by advertising professional and prize-winning scandal author Thor Kunkel. One ad, for example, shows the belly of a pregnant woman and pronounces, “New Germans? We’ll make them ourselves.”

AfD ad in Berlin: “New Germans? We’ll make them ourselves.”

Another says: “Burkas? We prefer bikinis.”

The ads have been criticized as racist, sexist and islamophobic. Addressing anger about refugees, the AfD currently is polling at around 10% ahead of the elections, and has made anti-migrant messages the core of its campaign. But it became even dirtier, thanks to Harris Media. Harris Media had the order to hone the AfD online advertising. Members of Harris Media recommended ideas, such as the slogan “Germany for Germans,” which even an AfD staff member rejected as too brazenly nationalistic.

When asked why Harris Media suggested this Nazi-claim and if it’s the right decision to make a campaign with nationalistic slogans, Chase Campbell, the right hand of Vincent Harris, says: “No comment.”

When asked if, in general, there are barriers to provoking people, Campbell explains that a lot of things a political party claims are provoking. “Negative campaigning works,” he adds.

According to correctiv.org, a german group of investigative journalists, Media Harris also helped the AfD create a dark website. The website is called “Angela Merkel the perjurer. The failure of Angela Merkel”: http://www.merkeldieeidbrecherin.com. The website alleges that Angela Merkel violated her official oath to protect Germany. Meanwhile, a counter blames Merkel as responsible for 98 dead due to terrorists, and depicts Merkel herself as being a terrorist.

Harris Media did not respond to a request for comment about the dark website and these allegations against Merkel. If nothing else, for Harris Media to work with right-wing-extremism slogans in Germany shows they have no ethics.Never before in modern history has there been such a deceitful and untrustworthy form of negative campaigning in a German election campaign. It breaks the unwritten rule of German policy to maintain decency in election campaigns. And it’s alarming and worrying that the borderless strategy of Harris Media and the AfD are striking the German electorate.