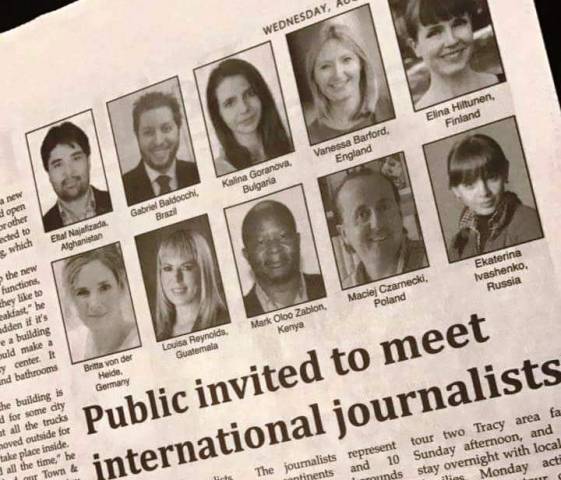 Earlier this week in the small town of Tracy, Minn. local residents asked questions – and the WPI fellows answered. The meeting was held in the style of a traditional press conference, with all 10 fellows sitting side by side along a long table, taking turns addressing the audience.

The first one is coming right now from a young man in the audience. It’s about the heated topic of “fake news”.

Question: “How can the average media consumer fight that system, where you think it is real news and credible source, but it’s not?”

Fellow Gabriel: “I think it’s quite hard to tell people what kind of sources they can rely on. We [as journalists] have to participate in that debate. For instance: Do you know where that news organization is based? How many reporters do they have, will they have the conditions to do the story? For example, if they talk about Afghanistan, have they been there?”

Fellow Britta: “And, where is the money coming from?”

Gabriel: “I do this at home with my parents. On Facebook, there are all kinds of reports from everywhere. They say, ‘There is a hurricane coming to Brazil.’ First, I’ll ask them where did you get that from? ‘Mom, do you know that we never had hurricanes here.’ We journalists have to tease you somehow to be critical.”

Recently, Facebook announced its new battle against fake news. More on the topic at the The International Fact-Checking Network page.

Q: How do you balance news with your own personal biases?

Fellow Vanessa: “Everyone has their own experience and must have some subjective opinions. If you work for an impartial and objective company that is something we must leave behind. We [at the BBC] have unconscious bias training as well.”

Moderator: “Isn’t actually the way media is going now is advocacy journalism? It seems like viewers want to watch or read something they agree with.”

Moderator: “Is less of that kind of journalism on your country?”

Elina: “Maybe… But then, well. I don’t have a right answer to that.”

What do you think, should journalists be “grilled” like this more often?