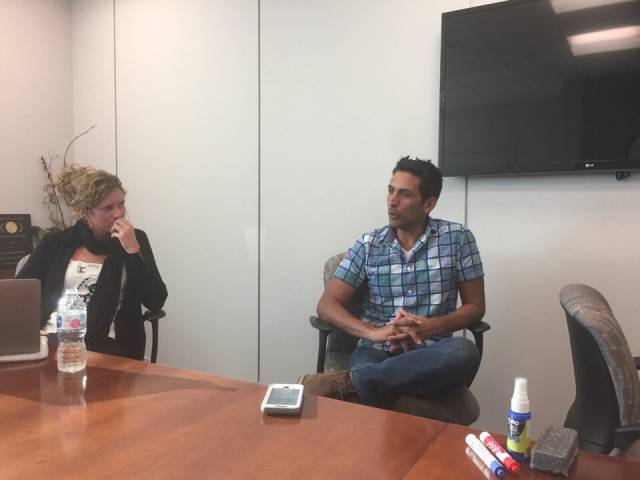 How journalists work during the hurricanes

This week our team visited the Miami Herald. The newspaper’s journalists were at the forefront during Hurricane Irma.

During the hurricane, many staff worked long hours to cover the events and help residents understand what was happening and how to prepare.

“We took hundreds of questions: how to get shelter, what products and things to stock up for the hurricane, where to put pets, how to get compensation and so on,” said Aminda Marques Gonzalez, editor at the Miami Herald.

Leading up to the hurricane, which hit the morning of September 10, the newspaper received a lot of feedback and interest from readers. Its website “was visited by more people than during the death of Fidel Castro,” the editor said.

David Ovalle served as a correspondent for the newspaper during the hurricane. He’s covered several hurricanes in his career and said he’s learned how to work during such emergencies. Previously, he covered Hurricane Katrina in 2005, Hurricane Din in Mexico in 2007, both of which were category 5, as well as an earthquake in Haiti, for example.

Answering the question “what things should journalists take with them during the hurricane?”, Ovalle said water, a rain coat, rain pants and boots. He added it’s also important to bring “baby wipes because you can’t take a shower for days,” as well as food, gas, pencils because pen ink runs in rainfall, a pencil sharpener and a landline phone. He also always packs headlamps because shelters are dark.

In addition to covering the event, he said reporters try to help people, especially those who stayed behind, giving them advice on where to go for help, get water and food, if necessary.

“We try to help, but it’s not always possible,” Ovalle said. For example, in Key West there was a homeless lady, and every day she was picking up the trash. We persuaded her to go to a shelter, because the storm was coming, but she refused. After the storm, we came back and she was there. We were happy!”