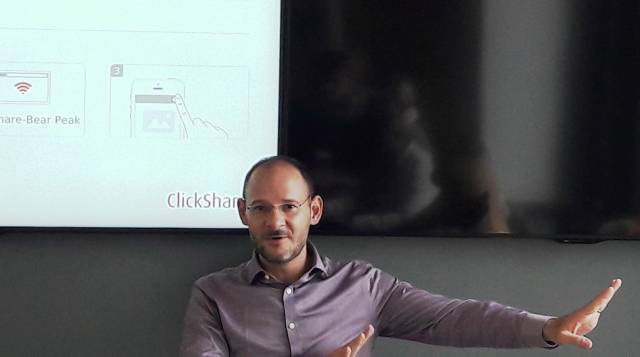 The United States has not completely backed from work against climate change. In the next United Nations climate meeting American companies, organizations and a selection of states will gather under the same pavilion, even though the federal government will stay at home.

This UN meeting will be hosted by Fiji in Bonn, Germany, in November. One of the Americans attending will be Paul Bodner, managing director of climate finance from the Colorado based Rocky Mountain Institute.

This week, the WPI Fellows spent a couple of days in Colorado — and visited for example the RMI. Photo of Paul Bodner.

He had a long career in the Obama administration, so you climate-change-denying people: he has different views from you. But please, continue reading, if you want to know why Bodner is so confident saying this:

– I believe the Paris agreement will survive, even what Trump has done, Bodner states.

Earlier this year, Bodner sat in a Boulder mountain bar with his boss, CEO Jules Kortenhorst, and came up with a strategy. President Trump most likely would announce that the United States is going to withdraw from the Paris climate agreement, wanting to “get a better deal.”

And so he did.

In response, according to Bodner, it was necessary to gather the opposition together, and so was We Are Still In -group born. For example businesses, CEOs, states, counties have signed the group’s declaration.They find, that it simply is not in the country’s financial interest to leave the agreement, Bodner says.

The coal industry is shrinking, and the renewable energy sector is growing. So, it’s too late to make coal great again, he adds.

As an observer from Europe, I wonder did Trump even read the agreement. It’s is built in a way, that a country cannot just walk away, especially when a new leader is elected. There’s always an upcoming election somewhere in the world!

In November, we’ll know what the impact of the “We Are Still In” group really has, at least it will be a big talking point.

Then, in the meeting in Bonn, the intention will be to finally make participating governments implement the agreement — to move from politics to action, as Bodner summarizes.