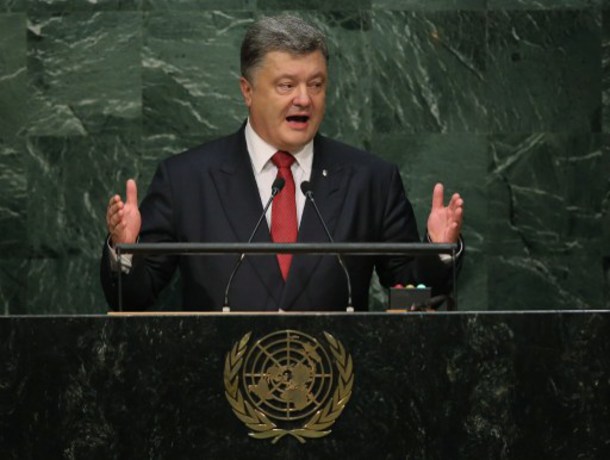 Poroshenko his own against Putin in UN

“We consider that any attempts to flirt with terrorists, let alone arm them, are short-sighted and extremely dangerous.” During the 20 minute speech of Russian President Vladimir Putin some journalists showed total confusion, some were smiling. “People laughed during his speech in Assembly. These are declarations. He didn’t say anything new,”said Iurii Sergeev, Ukraine’s permanent representative to the UN, one day later. Yes, reaction was different. But everyone – no matter supportive or critical – listened. Putin’s speech at the UN seems to have been the most popular among all of the 150 world leaders.

My Brazilian friend, the well-known Latin American anchor Luсas Mendes, started our dinner with his take on Putin’s remarks. “He’s more than a bureaucrat, he’s smart. He confused many Americans by saying the ‘right’ things.” Indeed, Putin did repeat a lot of Western positions as though they were his own. And during this session, when many leaders criticized the UN, to the contrary, Putin supported the organization. Putin played the diplomatic game by his own rules, placing his own accents and avoiding the topic of Ukraine: during his monologue he hardly mentioned the conflict in Donbas. And by grouping terrorism together with the Middle East, he wanted to make it easy to forget that it is precisely Russia that is arming terrorists there.

It is the Syrian escalation and resulting migration crisis that really are the most urgent topics in UN and all over the world. Ukrainian media and political experts sounded the alarm, distressed that Ukraine seemed to be taking a secondary priority. Personally, it was hard not to feel a bit of relief. It’s probably the first time in the past two years when Ukraine wasn’t the premiere flashpoint of the world’s concerns and, temporary or not, this can not be a bad sign for the country.

Also Western leaders are not so far divorced from the reality as to believe in Putin’s good will: In the last decade, it was Kremlin that was just as aggressive in its foreign policy as Islamic terrorists. And during all the general UN debates Russia rightfully sounded like the aggressor. Even the Russian journalists that I met in the city were ashamed to say they were from Russia.

“How was the speech?” one Russian reporter asked his colleague at UN media center.

“Obama was good”, his countryman smiled, pretending not to understand the question.

“Well, he always kept the eyes down,” complained the cameraman. For the cameraman it meant difficult filming. But it’s clear what Mr. Putin’s demeanor would mean to a psychologist.

When he took the podium, Ukrainian President Petro Poroshenko stood tall. He took the words of his diplomatic opponent head on, affirming that while Putin’s words sounded nice, they were hard to believe. It was the first time during Poroshenko’s speech on September 29th that the General Assembly applauded.

A year and a half into his presidency, Petro Poroshenko has met with many accusations, among which are corruption, slow reform and a failure to fulfill his promises. You could also hear some sarcastic tones coming from the press pool when the oligarch Petro Poroshenko said oligarchs shouldn’t rule Ukraine. It’s hard to deny the facts against Poroshenko put together by journalists, and it would be hard to call him the perfect president. But as leader of Ukraine it was his responsibility to remind and insist. And Poroshenko was successful in that.

Traveling the United States for 6 weeks I hardly met a single peson who knew about the 1994 Budapest Memorandum, where their country guaranteed Ukraine’s territorial integrity and soverignty. The American news only lightly reported about their responsibility at the beginning of Russian-Ukrainian conflict. But I suspect this broken promise is one reason Western diplomats are reluctant to criticize Poroshenko’s own, although Ukrainian journalists reported that the look of disappointment on Victoria Nuland’s face after her meeting with Poroshenko and Biden spoke volumes.

Poroshenko also performed his duty admirably in describing the peculiarities of Russia’s hybrid war, in reminding the international community about the Crimea annexation, violations of human rights, and a new kind of sudden poverty – the 1.5 million Ukrainian IDPs from Donbas and Crimea. He also mentioned the names of political prisoners in Russia, rights of Crimean Tatars and demanded to limit the veto right of permanent members of the Security Council. “Abuse of the veto right, its usage as a license to kill, is absolutely unacceptable”, said Poroshenko in his speech, again to audience applause. Poland and France were especially supportive of Poroshenko on this question.
President Poroshenko’s schedule was predictably tight. The UN General debates speech was not his first this trip. On September 27, he spoke at the Clinton’s Foundation, delivering a speech that came across as both emotional and well-reasoned. He got plenty of support, at least in public, from Bill Clinton, who invited the international community to invest in Ukraine. And also defended Ukraine’s request for non-lethal modernized weapons.

But the biggest deal was Poroshenko’s meeting with Barak Obama. Firstly two presidents exchanged greetings on Monday at noon, but they spent significant time together that night. The details were closed to the press, though in his Monday speech, Obama devoted more time to Ukraine than Putin did, being particularly clear in US position: “we cannot stand by when the sovereignty and territorial integrity of a nation is flagrantly violated. If that happens without consequence in Ukraine, it could happen to any nation gathered here today. That’s the basis of the sanctions that the United States and our partners impose on Russia.”

While world leaders played out their diplomatic battles, regular people also showed their position. Before and during Putin’s speech, across several blocks adjacent to the UN you could hear EuroMaidan slogans: “Glory to Ukraine! – Glory to Heroes!” and calls for “Russian troops out of Ukraine,” “Russian troops out of Georgia,” “Crimea is Ukraine.”Local diaspora and immigrants from all over Eastern Europe attracted cameras and managed to drown out all other meetings.

Before Poroshenko’s speech in Assembly on Sunday, the Russian delegation made a show of leaving the hall. The next day, the Ukrainians (Hanna Hopko among them) decided to show a Ukrainian flag that had been shot through in Donbas, during Putin’s speech. Security made them leave the Assambly too.
The UN, predictably, is too bureaucratic to be functional, but Poroshenko’s team at this session took advantage of another chance to ask for the support of the organization in Ukraine’s conflict with Russia. On October 15, the United Nations will vote for to accept Ukraine as a non-permanent member of the UN Security Council. The Ukrainian delegation and its representatives in UN are optimistic about the decision. Obviously it will show Poroshenko punching above his weight and measuring up against Putin in the diplomatic ring.