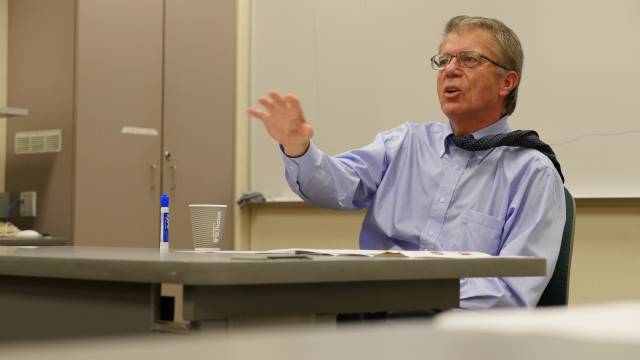 I wake up with Trump. I go to bed with Trump. Whether I am in Germany or in the United States, I didn’t think it would make a difference to me. But it does. Now I am here in St. Paul at the University of St. Thomas, and Trump is nearer and his announcements annoy me. Today, while we were talking with Mark Anfinson, a media attorney and adjunct professor of media law, about free speech, Trump was interrupting a journalist at a press conference, abusing him as “fake news”. He attacks journalists, reprimanding them as if they were little children who ask cheeky questions they are not allowed or supposed to ask: “Shut up, fake news!”.

So, while Anfinson describes the high value of free speech in America, a journalist can’t even ask a simple question about why Trump doesn’t denounce the white supremacists in Charlottesville.

I ask: “Is white supremacy protected by freedom of speech?” Anfinson explains that the U.S. Constitution’s First Amendment protects free speech very broadly. I thought to myself: “But does the First Amendment even protect hate speech? Britain and Germany are among nations that have criminalized hate speech in various forms.”

As Anfinson continues, I am surprised to learn the First Amendment of the U.S. Constitution allows hate speech, including that which denigrates people on the basis of their race, gender or sexual orientation.

I understand the argument that it would backfire if the government tried to suppress the expression of people’s views. It would strengthen that movement. At once it is hard to bear the hate speech, the incitement of the people. And one must ask if the white supremacists may have crossed a line into what is known as unprotected speech. In 1942, the Supreme Court ruled that “fighting words” are not protected under the First Amendment. The Court defines “fighting words” as “those which by their very utterance inflict injury or tend to incite an immediate breach of the peace.”

Considering that Saturday’s rally turned violent it is important to analyze the role that language may have played in sparking the violence and whether it is protected by the First Amendment. White supremacist slogans like “One people, one nation, end immigration,” “Jews will not replace us,” “White lives matter” and “Blood and soil” offended counter-protestors. But the courts interpreted such broad insults as protected forms of speech, according to Anfinson. Some demonstrators also were chanting “Go the fuck back to Africa,” and law experts say this may not be a protected form of speech, because this is a racist comment that could provoke someone to retaliate.

So, there will be no court which says that this hate speech is not tolerated and not protected by the First Amendment. Even if there was a court which did so, it is more important than ever that Trump denounces the white supremacists. But instead of denouncing them, Trump insists on their right to free speech – a right he himself takes much advantage of – and a right he seems to want to revoke from journalists: “Shut up, fake news!”.