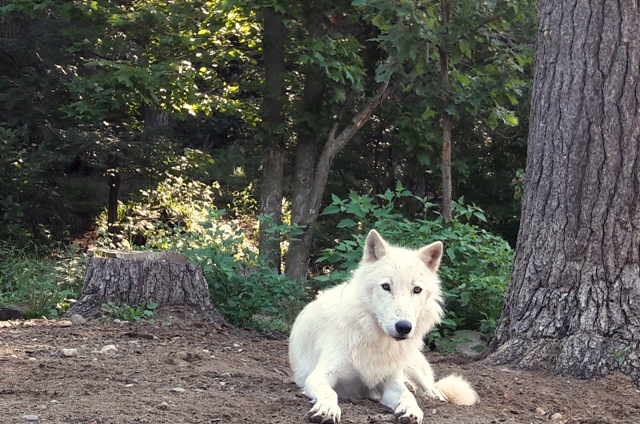 Alex the wolf may appear as a shy individual. This one-year old gray wolf allows his fellows to take the first step closer to the fence, while he stays at a distance, lying gently on the ground. We the humans already stare fascinated at these animals.

We’re at the International Wolf Center in Ely, Minn. Wilderness begins just outside the door.

“We do not tell the people what to think about wolves, but we will give them scientific information, so they can make up their minds”, says Wolf Specialist Cameron Feaster.

Now Alex’s ears are not folded back anymore. It is a sign of relaxation. Alex is still looking up from time to time, as if there might be something or someone threatening.

Feaster opens up a door of a giant freezer. Petrified, yet beautiful, the big eyes of sheep and deer stare into the distance. In their gaze one can see the moment when one realizes: this is the end. Wolves are natural carnivores, and this is their everyday food. 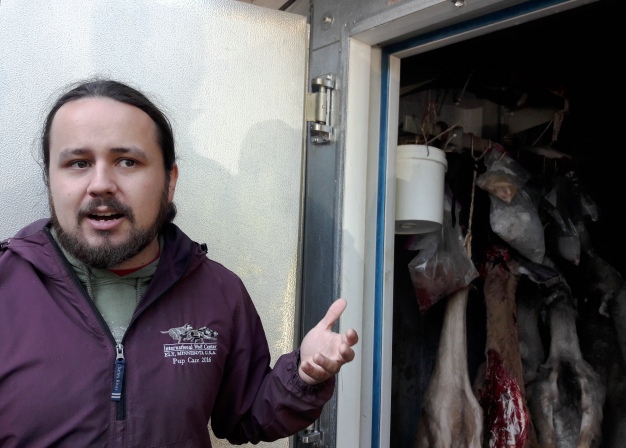 “Here’s also some bacon”, Feaster goes through the shelves, where a handful of ziplock bags with bone dust are.

Dust may seem just a random addition to the diet, but if you ask the wolves, they would compare it to the most delicious food you’ve ever eaten. And it serves a purpose: vitamins taste so much better rolled in it!

At times even the most advanced meat-eaters, such as Aidan the nine-year-old pack leader, can suffer from digestive problems. “Sometimes they need Pepsid”, explains Feaster. He feeds the older wolves joint supplements in order to give them more active years.

Alex is too young to need to worry about that. Lately, he has been challenging Aidan’s leading role, maybe later he’ll succeed in it.

Alex has kind eyes, and he lets you look deep into them. A minute or two passes by as we look each other. Alex gets up, moves behind the others, and I can see a new leader growing up.

The 2017 WPI Fellows traveled to Ely last week, and one part of the trip was to learn about the wilderness nature of Minnesota at the International Wolf Center.