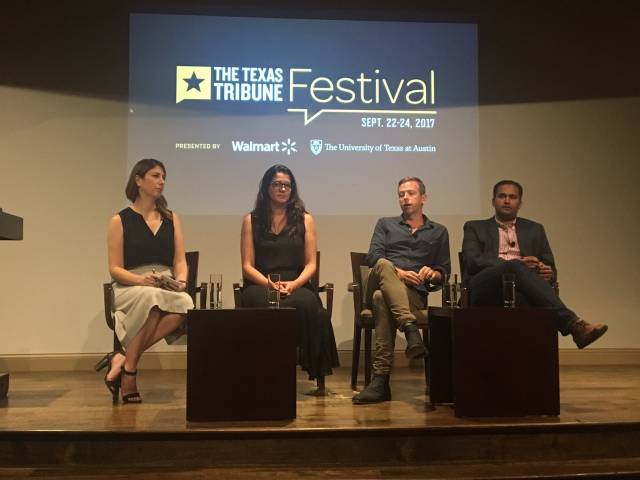 The challenges of a ‘disrupted’ news industry

“Bad story selection – or in not so-PC terms – dumb, lazy noise.” That’s how Peter Hamby, the head of news at Snapchat, summed up the biggest threat to the media industry at a panel discussion at the Texas Tribune festival on September 23.

“The homogeneity of news is a real problem. There’s a lack of bravery around telling new stories,” he added.

For Sudeep Reddy, the managing editor of Politico, “shrinking attention spans” are the challenge of our era.

“We are living in a frenzied environment and having hair-trigger responses to everything. The more we encourage that, the less we advance society and journalism,” he said.

Meanwhile, Melissa Bell, the co-founder of Vox, singled out what she called “Roger Ailes’ legacy,” saying “TV news has got too shouty.”

Bell also agreed that shrinking attention spans was an issue, saying the media had a responsibility to change its approach.

“We built platforms based on gaming theory, which encouraged short-term attention,” she said.

“It’s on us to be thinking of new storytelling platforms… and we need to create more safe spaces for people to have discussions.”

The audience is interested in longer, beautifully produced, engaging content, she argued, citing one of Vox’s most popular videos, a seven-minute explainer on Syria, which has had 100 million views since it was published in April, and has a 60% completion rate.

A new podcast by The New York Times, the Daily, which serves up a blend of reporting and analysis in about 10-20 minutes, has accumulated 750,000 daily listeners since it was launched in February, he added.

The wide-ranging discussion, “Disrupting the News,” also touched on the polarization of society and the media, the doubling down on accountability journalism in response to the rise of fake news and the industry’s pivot to video.

Social media attacks, particularly on Twitter, also came under the spotlight, with Reddy advising journalists to “just present the facts” rather than “feeling like they have to weigh in.”

Hamby had some sage advice for traditional media’s pursuit of younger audiences, a demographic it struggles to reach. Most of Snapchat’s users are under 35.

“You don’t have to say ‘lit’ or ‘woke’ [to try to appeal to young people]… they just want credible, authoritative information they can trust,” he said.

He also appealed to editors to spend more money sending reporters out into the field, instead of on “bad television pundits.”

Echoing his sentiment, Reddy implored young journalists to “go somewhere else in the country and understand the world,” even though he acknowledged that most of the new journalism jobs in America are currently being created in Washington, D.C., and New York.

It was clear from the discussion that the news industry will continue to be disrupted for the foreseeable future, and that editors and journalists not only have a huge role, but also an urgent responsibility to help shape it.