I’ve been talking about this guy, Jorge Ramos, for two days, so I thought I might as well write my blog about him.

There could be few journalists more influential. Last week President Barack Obama and challenger Mitt Romney came down to Miami to be grilled by him. I can’t imagine there are too many journalists in the US that have that kind of pulling power.

He asked some tough questions-  this to President Obama on why he didn’t deliver compehensive immigration reform. “You promised that, and a promise is a promise. And with all due respect, you didn’t keep that promise.” 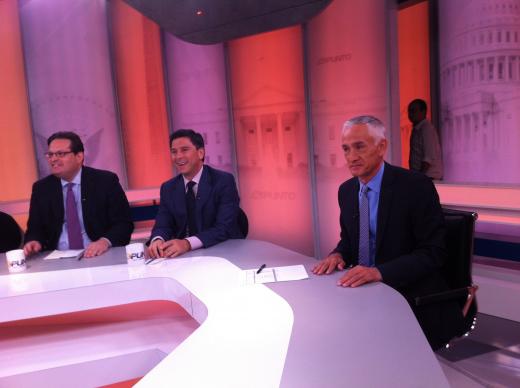 So why does Ramos have the power to grill the Pres? Because of the audience. Ramos is the chief anchor on Univision – the network that reaches out to Spanish speaking America. There are about 55 million hispanics in the US, about 12 million likely voters. Exact viewer numbers are hard to estimate, but Univision finishes number one in key markets in the nation and key demographics (18-36yrs) and is the 5th network nationally. (According to the Hollywood Reporter 2.7 million people watched the Obama interview, 2.8 million people watched Romney)

Ramos is the first to admit that reach has made Univision indispensable to the major political parties. As he says “They need us”.  To get elected they must get 12 milion Latino votes.

But it’s not just his role in hosting the two leaders that impressed me. He spoke very thoughtfully about the changing face of the United States -as it realises its placed on a vastly Latin American continent.

Here are some good quotes from him during our visit:

“Right now if you go to any hospital in Texas or Los Angeles half of all new borns are Latinos. Just imagine when they go to the polls. As I used to say the most popular names in Texas and California used to be Michael, now it Jose. More people eat tortilla than bagels, and more salsa than ketchup.

“We’re  changing not only the way people eat, or dance, but also the way people are voting. And its really interesting. Obviously you saw Mitt Romney’s tape where he was dismissing 47 per cent of the population. Right before, at the beginning of the tape, he said that Latinos are going to the Democratic part in the same was as African Americans, and if is stays that way, the party’s in trouble and the country’s in trouble.

“What he’s saying is that either they do something about Latinos right now or the country is going to go in a completely different direction.  He’s saying it’s a problem for his party, but the subtext is that he’s saying the country is going to a place that I have no idea. People are talking spanish, they are brown, they have an accent, they eat tortillas, they listen to Shakira. Wow, this is not my country.”

I had underestimated the importance of the Latino political bloc in US politics and its influence on the future of America. But after going to Univision and meeting this guy, and listenting to what he says, I won’t any more.