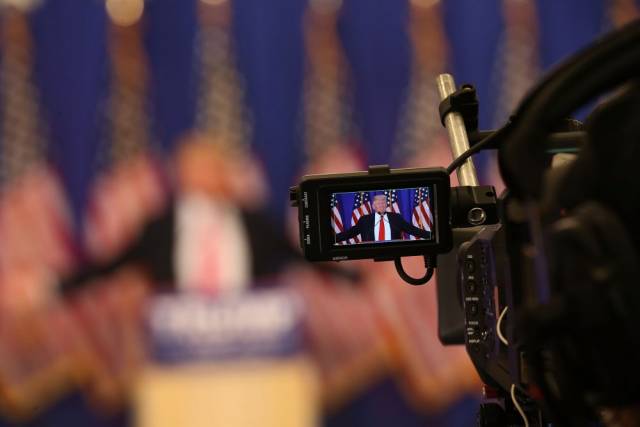 He calls it fake, joke, failing, and many other pejorative adjectives. But the truth is: Donald Trump loves the media. That is what we learned from several experts, senior White House reporters and top editors of the main American outlets. He is a media creature, they say, and always relied on his relationship with reporters to get his business in the spotlight.

As president, he follows the stories closely and cares about what journalists write and say about him and his Administration. Even some of his close aides know this very well. They try to use their press connections to get stories that can influence their boss decision’s. “They are more open and not so disciplined as in the Obama mandate,”, says a senior White House reporter for a major media company. “But the problem is, it is harder to know if you have the whole story.”

Trump’s obsession with the media is historical and usually highlighted by one specific episode, the fake spokesperson. In the mid-80’s, he pretended to be John Barron, a public relations director he made up, so that he could pitch to reporters the things he wanted written about himself. An alter-ego and a personal cheerleader.

For those who are used to dealing with his personality, things haven’t changed much since then.

“Trump has always been very close to the media,”, says Matt Mackowiak, a communications and political consultant who has worked as press secretary for Republican senators and is now chair of the Travis County Republican Party.  “He consumes more media than anyone else.”

Carolyn Ryan, now masthead editor of The New York Time, describes this picture using one example of the 2016 campaign, when she was leading the political coverage in the newspaper. “I could not walk through the desks, with about 20 reporters, without somebody being on the phone with Donald Trump. And he would get on the phone with the lowliest intern. He can be quite seductive and quite charming on the telephone, you know, he was his own press agent”, she says. “It was quite striking because we had a really good reporter also covering Hillary Clinton and I think during the entire two years she was covering her, she got one interview, on the telephone, for 10 minutes”

Trump has recently declared war on the newspaper. His current attacks and criticism toward the press, though, are seen as a way to appeal to his supporter base. While Ryan is concerned about the consequences of these accusations, she is aware of the audience’s “hunger” for Trump’s stories and welcomes the benefits of this phenomenon. “There has been a huge interest in Washington and that is driving a lot of interest in the New York Times. Everyone wants to know more about this unpredictable leader”, she says. 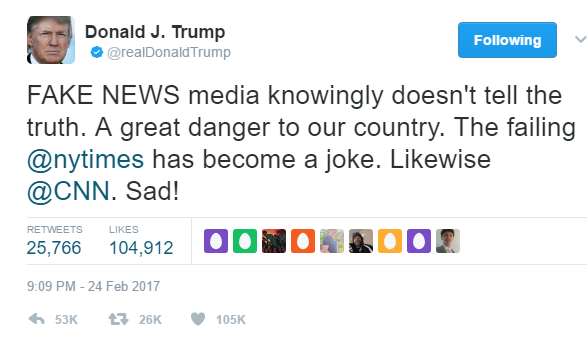 This massive interest is known as the “Trump bump” for the press industry and has spread out through different kinds of media and outlets. The New York Times claims an additional 500,000 subscribers due to the New Administration. The non-profit journalism initiative Pro Publica says donations doubled their goal for this year, and reached US$ 20 million.

Traffic also has been soaring on the internet since the elections as show in this graphic from The Wall Street Journal prepared for a story published on September 21st. TV broadcasters all over the country are benefiting, too, as we were told by senior editors at some of the main TV companies. An audience increase seems to be given for the rest of Trump’s term. The question is how the media will sustain those numbers when the next president is inaugurated. 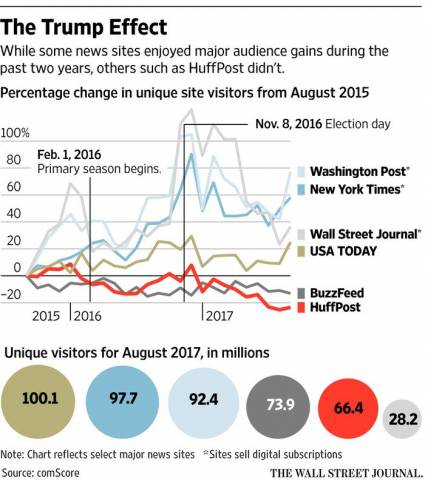