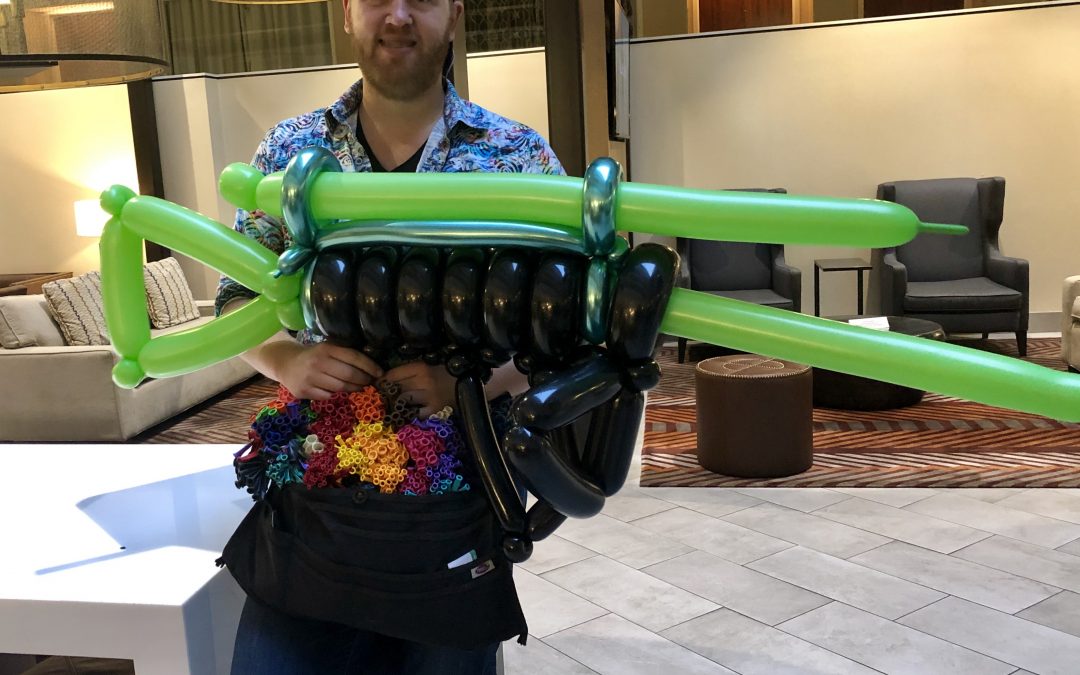 2019. “The right of the people to keep and bear Arms shall not be infringed.”

It was 8:30am on a hot Saturday morning in the Embassy Suites lobby in Austin, Texas, and Stuart Maue had already put together a sophisticated automatic rifle made of over 15 balloons. He started light, a couple of minutes before, with two balloon-puppies, and quickly moved on to more serious stuff.

“You need to educate children about gun safety,” he told me, declining to say whether he owned a gun himself, as he would not answer questions “that could be held against him.”

Maue grew up in the Midwest, moved to Austin and, while working as a pizza deliverer, started making balloon roses for better tips. He then realized he could start a business, and now runs Blow Up Success, a profitable balloon-sculpture enterprise that earns thousands of dollars for a weekend-long corporate event. One of his clients was the NRA.

That morning he was at the hotel for the fun and to kill time.

According to The Dallas Morning News, Texas has more than 1.2 million active holders of concealed handgun permits and no laws regulating the possession of long guns, such as shotguns and rifles, other than existing federal restrictions. Ironically, handgun control is lighter than rifle control. You must be 21 to buy a handgun from a licensed dealer, but you can buy a rifle at 18. You need a license to openly carry handguns in public, but not rifles.

The gunman used an AK-47, an automatic rifle, that killed 22 people and injured more than two dozen in the same state, in El Paso, in early August. Federal authorities are now treating the massacre targeting Hispanics as “an act of domestic terrorism.”

Minutes before he opened fire in a Walmart, the 21-year-old gunman is believed to have posted online a manifesto filled with white supremacist language and racist rhetoric aimed at immigrants and Latinos. He said he opposed “race mixing,” encouraged immigrants to return to their home countries, and warned of a “Hispanic invasion.” Similar to President Donald Trump.

People have been saying for years that we should talk to Mexico. The problem is that Mexico is an “abuser” of the United States, taking but never giving. It has been this way for decades. Either they stop the invasion of our Country by Drug Dealers, Cartels, Human Traffickers....

Twenty-four hours later, a similar tragedy took place. A 24-year-old man in Dayton, Ohio, killed nine people (including his sister) and wounded 27, in just 32 seconds, with an AR-15 assault rifle. He was shot just when he was entering a bar in a busy area.

The man had a history of threatening women with violence. Dayton Mayor Nan Whaley, told me the gun man even had a rape list and targeted a bar where women had rejected him. I met the mayor at the Texas Tribune Festival in Austin, where she and the mayor of El Paso were speakers together.

Ohio is an open-carry state with one of the more liberal gun policies right now, she told me. “In a public demonstration we had in May there were 75 assault weapons on people, as they were walking the streets,” Whaley said. “No permit required.”

Ohio is trying to restrict gun policies now. After the shooting, the Ohio Republican governor proposed a red-flag law and, even though he will have to get that passed through the majority Republican state legislature.

“He feels confident we can do it,” the mayor said. “The fight isn’t between someone who loves guns and someone that hates them. The fight is between regular people and gun makers, who want to sell more guns.”

Whaley didn’t personally know anyone who was shot and does not own a gun herself. She’s been a mayor for six years, and has not decided whether she will run again, saying: “I’m trying to get through this year.”

“It’s so unnecessary, we don’t have to live this way,” Whaley added.