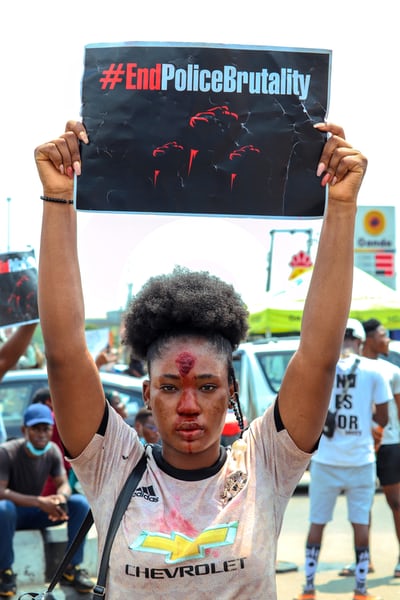 On Oct. 4, 2020, a viral video showed Nigerian police officers assaulting two men, dragging them out of a hotel and killing one. These officers were members of a special unit of the police force, the anti-robbery squad, also called SARS. The men were probably not robbers. At least, we’ll never know since SARS does not seem to ever make arrests. They assault anyone they deem a potential criminal, which tends to include anyone with a laptop, including journalists.

This was the beginning of a protest as passionate as the George Floyd murder protests. This was a protest against police brutality and the extrajudicial murder of young Nigerians every year. And like the police brutality protests in the United States, it bore a movement, #ENDSARS.

There are several similarities to draw between police brutality protests in Nigeria and those in America. One will be the role of journalists in it. In covering these protests across the country, journalists were arrested and sometimes killed as they took a stand with the people against police brutality. In Nigeria, a journalist’s loyalty is to the public, and when the journalists are all that is left to depend on, advocacy should be a natural response when the masses are the victims of oppressive power.

Advocacy journalism presents a healthy distrust for the balance of power. In communities where there is an imbalance of power, objectivity is the death of justice. One does not claim to be a community reporter without feeling the pains of the community they belong to.

In the United States, protests in support of George Floyd’s civil rights drew attention to a non-profit media collective, Unicorn Riot, which covered the protests and brought its pain to the world. Its co-founder Niko Georgiades, who recently was part of a panel on protest media held at the George Floyd Global Memorial says Unicorn Riot tries not to present itself as advocacy journalists. He draws a distinction: although their news coverage does effectively help advocacy efforts for the community; they are not advocates per se. He also noted that in the United States, the term “advocacy journalism” is used by the mainstream to disqualify the news legitimacy of outlets like Unicorn Riot.

But that in itself raises a critical philosophical question.

Is journalism an art or a science? As an art, it replicates life and journalists within it have to feel the pulse of the times, its pains and joys alike. As scientists, we must analyze its structure and context while offering ways for evolution. Advocacy journalism is as dangerous as it is bold.

For those against advocacy journalism, it does not uphold journalistic tenets of being impartial and unbiased, and such journalists need to decide if they are journalists or advocates. Perhaps, in this sense, neutrality is a weapon for exploitation and this post World War II world stance needs to be reviewed within innovative journalistic parameters. When the position we hold leads to justice, is that not the desired result, anyway?

Journalists use professional ethics as a boundary marker to differentiate between activists and advocates. Advocacy journalism demands measurable change and, in covering issues that demand change, we exercise our role in preserving democracy.

Isn’t advocacy the root of what journalism is, anyway? What makes it any different?