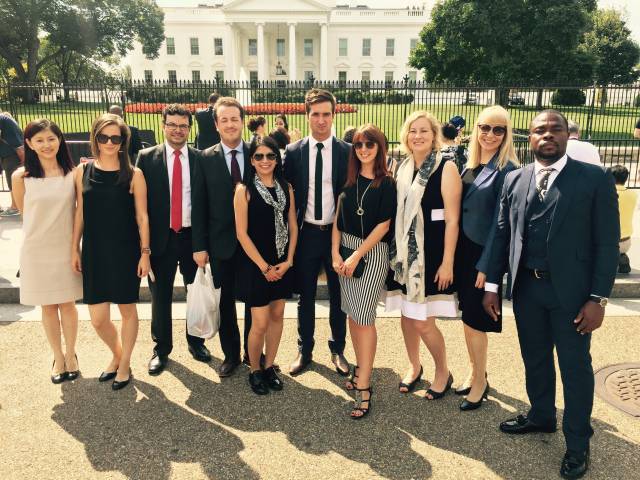 An American Dream: Reflections on the WPI Fellowship

In the glovebox of a Chicago taxi there is a birthday card from Barack Obama.

The driver, Kenny, doesn’t stick it to the dash, like the photos of his wife and grandkids. He’s worried someone might tear it off.

Kenny picked up Obama once, when he was a state senator. He asked the driver when his birthday was. The handwritten card arrived a few months later.

“You and I both believe in change,” part of the message reads, before being signed off “your humble passenger, Barack Obama”.

Obama had been in town that October day, the Friday of the Columbus Day long weekend.

I found out as I stood on Lake Shore Drive, Lake Michigan at my back, sun on my face, waiting for the lights to change.

Twenty minutes later, I was standing in the same spot. Police were directing traffic, and cars had been emptied from the intersection, and no pedestrians had been allowed to cross.

And then the cavalry wailed past, as impressive as it was terrifying. Behind one of those shiny black windows was Obama. He was headed south.

Later that day, with slightly less fanfare, Kenny drove north towards Wrigley Field. The star-crossed Chicago Cubs were playing their first game of the post-season.

The Cubs finished the season with the best record in the country, and featured in every national newspaper that day, as a new quest to lift a 108-year-old curse from their sunken shoulders began.

About the time it started, The Washington Post published a video which showed him making vulgar comments about women and bragging that his fame meant he could get away with sexually abusing them.

In less than 48 hours, Trump was due to take the stage in St Louis for the second presidential debate. The release of the video appeared to be a body blow to his campaign.

It was entirely feasible he would be disendorsed by the Republican Party.
I had my media accreditation and tickets to St Louis. At that point, it was more likely I would be there than Trump.

Kenny wasn’t too fussed about Trump or the Cubs though, or what this evening could mean for their prospects. He was telling a joke.

He took his right hand from the wheel to point at a photo of his wife holding a small dog.

“Know what type of dog that is?” he said. I guessed a King Charles Cavalier.

He said his jokes weren’t that funny, but that he had a captive audience. Kenny swiftly flicked the automatic door locks open and closed – click-click, click-click – to demonstrate the point.

About six weeks later, Donald Trump was elected president. And the Cubs won. And I found myself wondering just how much longer than 11 weeks I would have to spend in the US if I wanted to try and make sense of it all.

The World Press Institute fellowship was funny like that. It made you realise how little you knew. It made you want to find out more to prove just how wrong you’d been. 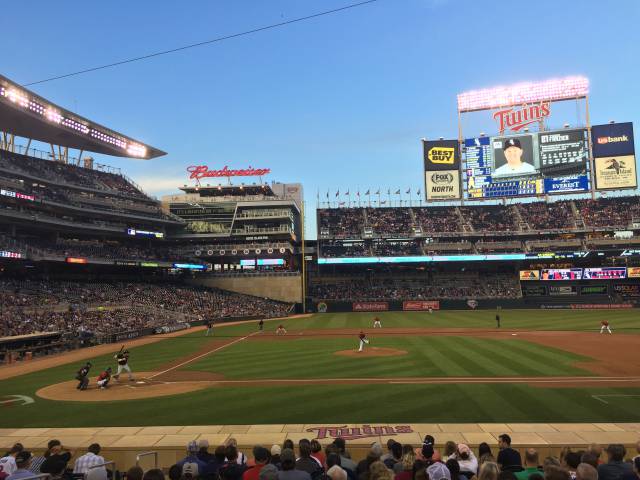 There was some things I was glad to be proven wrong about.

I no longer believe journalism is doomed. I think there are so many smart people doing so many good things – from the not-for-profit investigative news outlets we visited in San Francisco, Austin and Washington, to smaller local outfits in Minnesota, to the internationally-renowned behemoths – that someone will find a way.

And at least some of it will work in Australia, or anywhere, for that matter, and keep journalists in journalism.

We met a lot of these people (the themes for the fellowship were police-community relations, nuclear security, the US presidential election, and the future of journalism).

They often spoke to us on background, to ensure they could be as frank as possible, and they talked about the whimsy which had inspired their endeavours, the threat which they felt democracy would be under should the power of journalism be undermined (a more prescient thought than ever, perhaps, in the wake of the election result), and their bullishness they would succeed.

It was deeply reaffirming.

I was also glad, even if it is a scary proposition, to be proven wrong that only greyed hippies who marched for disarmament in the 1960s, or hand-wringers with their gaze fixed on Pyongyang, worry about a nuclear disaster.

In fact, there’s people all across America doing it.

Some of them even talked to us about it while sitting on picnic blankets on a gorgeous San Francisco morning, the fog barely lifted from the Golden Gate Bridge.

Nuclear proliferation is truly frightening, and an issue drawn in sharper focus since the US election.

We had the good fortune of being able to meet a member of President Obama’s security council in the White House the morning after North Korea’s most recent nuclear missile test.

I cannot help but wonder now what the meeting of a President Trump security council after such a test would be like.

There were other things I wish I had not been proven wrong about.

I no longer believe that it is inevitable that one mass shooting will eventually be one too many and America will solve its gun problem.

Paul from Tracy, Minnesota taught me this. He taught me while we sat at Bonnie and Clyde’s, the only place open in a town of about 2000 in the Corn Belt on a Monday night.

He taught me while he drank whiskey and I drank beer, and he told me he had a conceal and carry permit, that he didn’t have a gun on him right then, but that he felt good about being able to have one if he wanted.

He taught me by constantly referring to the Second Amendment, and with his utter disgust that I would even suggest its notions about bearing arms and forming militia were outdated.

And I taught myself when I realised I’d resorted to asking him whether it would take the slaying of his own granddaughter in a mass shooting for him to reconsider his position.

Those are the things which I don’t believe anymore, and the experiences that shaped that shift.

But there are dozens of other experiences which, even weeks later, I haven’t completely wrapped my head around.

Like learning in Chicago, where about 600 people will be murdered this year, that there is growing movement to treat violence like a public health problem.

Or walking past abandoned and dilapidated multi-storey apartment buildings which sat haunted only blocks from the shell of a new $1.2 billion stadium being built in Atlanta.

Interviewing women who supported Trump in St Louis. The manatees which made me fear for my life in Miami Beach. The arguments at the New York Times’ morning news conference.

There was the case of Jacob Wetterling, an 11-year-old who was kidnapped from a small Minnesota town in 1989, whose murder was solved when we were in Minneapolis, only days after I’d heard he’d even existed.

There were the people we met and saw in the White House – from the member of the security council to the people in the gift shop – and my yearning to know what they thought on election night.

There were the Black Lives Matter advocates and their focus on slavery.

There were the several hours I spent driving a black van with tinted windows filled with people from every continent on Earth through cornfields in south-west Minnesota as French house music blared.

There was the person I stayed with who owned earrings made from raccoon appendage. 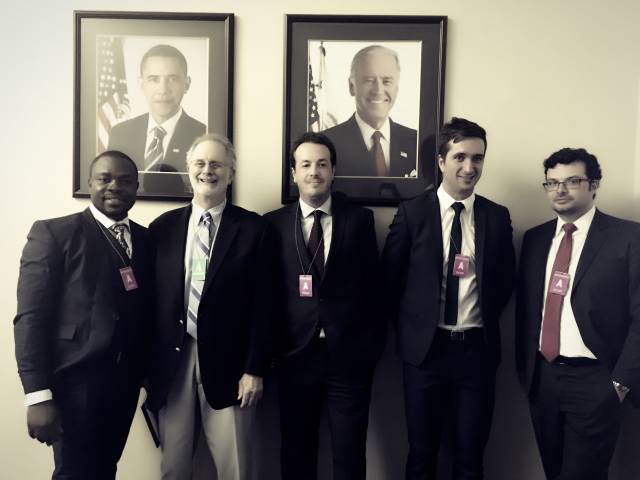 The fellowship affirmed something I already knew, too: that the US, in so many ways, represents the absolute best and worst of almost everything on the planet.

You see this in cities like Los Angeles, through a smog of pollution and evaporating dreams.

On my last day there, I woke at 7am and spent the next 90 minutes in a car travelling 20 kilometres to Venice Beach.

Once I got there, I swam in the Pacific. Dolphins arrived. And as I dived under the waves, I heard them clicking to one another.

Later that afternoon, we interviewed Stephen Galloway, a Cambridge graduate who works as the Hollywood Reporter’s executive editor. He was utterly compelling.

“What’s the greatest myth about Hollywood?” he asked, the answer already sitting on his tongue.

“That the camera never lies. It lies all the time.

“Hollywood is all about there not being a truth. It’s about dreams and make believe.”

That night, I wandered around downtown LA, killing time before I could watch the AFL grand final. The Western Bulldogs were trying to break a curse that had threatened to become Cubs-like.

I walked past the Los Angeles Times building, dwarfed by a sparkling court building and hulking police station. There were banners outside advertising tickets for a food event which had been held four weeks ago.

I walked up to Grand Avenue, and saw the hunks of discarded spaceship which Frank Gehry thought would make a fine concert hall. He was right.
The Walt Disney lay silent, but inside the Los Angeles Philharmonic were playing.

Opposite the building, on the third floor of a carpark, a blonde woman dressed in black sat on the ground. She was propped up on a pylon, clutching at her left arm, trying to find a vein.

A roll of skateboarders shuddered behind me, swerving across all five lanes of the road, finding and then harnessing troubling amounts of speed as they careened down Grand Avenue into traffic.

I caught a cab to Echo Park soon after, and met a friend at a late-night diner.

It reminded me of Lange’s Cafe, in Pipestone, Minnesota; an American cultural icon just down the road from a national monument declared because of its significance to Native Americans.

When a concrete slab was being poured in front of Lange’s, just a few days before it was due to open, the brothers who owned the business made a grand gesture: they tossed the front doors keys in the cement, to signify that the diner would never close. And it hadn’t.

There had been, however, two occasions when it was open, but didn’t serve customers: when the owners’ father died, and when JFK was assassinated.

This diner in Echo Park had closing hours, but its door was open now, and in they came: cops and hoods and vagabonds and people who could have been all three.

I sat there and took it all in, eating too much, thinking I’d be home in a fortnight, and would miss places as American as this.

I talked about this with the two guys I ate with, men in their 20s trying to make it as musicians. I thought about how many of them there must be in this beast, a city with almost as many people as Australia.

And when I stopped thinking, and looked at my watch, I realised the grand final was almost over.