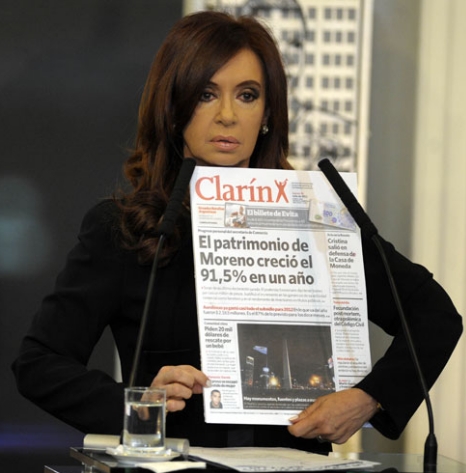 As a journalist, you don’t want to be on a president’s naughty list (or maybe you do?)

I remember a day when all the reporters in my newsroom were staring at the TV. Some sat behind their desks, while others stood for a better view with arms crossed on their chests, eyes focused on the screen. It was 2015. All were listening to then-President Cristina Kirchner, giving a Cadena Nacional, which is a state emergency message and something we Argentinians got used to in those days.

Although in my country, the law says a Cadena Nacional can only be used “in serious, exceptional situations or of institutional transcendence,” from 2009 until May 2015, the now-former president used it 118 times for doing all kind of announcement.

Each time, Kirchner spoke for one hour, maybe two, to everyone in the country. All national TV and radio networks had to interrupt regular broadcasts for the emergency message.
Kirchner governed Argentina from 2007-2015, and during that time they would pick a daily fight with news outlets that criticized them, including my newspaper, La Nación, and Grupo Clarín, another popular daily.

Each time, the country had to stop and listen, including me and my colleagues at La Nación newspaper, because sometimes she used her platform to dispute the content of our articles. Often, she mentioned authors’ names as a form of public punishment, which could lead to anything from online mobs attacking you to you getting fired. Once, she presented the pages of my newspaper and Clarín as “evidence” that the two biggest newspapers in Argentina were lying.

When I recently visited the Newseum in Washington, D.C., I saw my country painted yellow on the Press Freedom Map which demonstrates how press freedom differs dramatically across the globe. This color is for partly free countries – Argentina has 51 points on a scale of 0 to 100. The organization Freedom House updates the ratings daily. For reference, Chile, Uruguay and the United States are green. 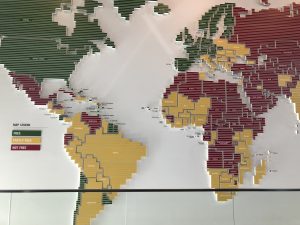 About Argentina, Freedom House states: “The government has shown little taste or tolerance for criticism in the news media (…) 34 Argentine journalists were physically attacked in 2006 alone, most often by political figures, police or bureaucrats. Under former president Néstor Kirchner, the Argentine government dramatically boosted its advertising budget, rewarding friendly media with government spots and punishing critics by withholding ads.”

Michael O’Donnell, associate professor of the Communication & Journalism Department at St. Thomas University in Minnesota, shared his research of President Trump’s tweeting habits. It turns out that from June 8 to August 8, Trump posted 350 tweets. Of those, 45 were used to attack the media. Like Cristina Kirchner, he too has a blacklist. 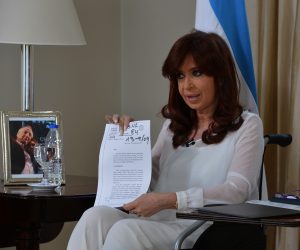 Many of my friends at La Nación and other media were blacklisted by Cristina Kirchner, and named and shamed by the president on live TV, Twitter and Facebook. Being on her naughty list can be a scary thing, especially for those who cover politics and economics. But some would just laugh it off, trying to anticipate the president’s next quotes. Others hoped to be next. The reason was simple: if the president criticized you, you were doing good journalism. 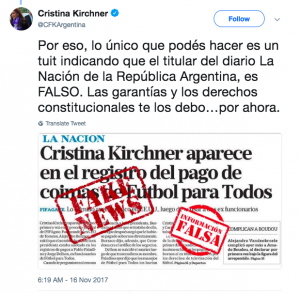