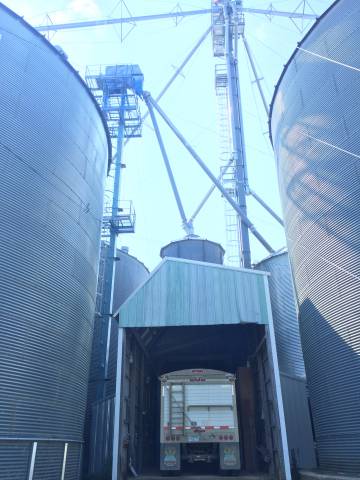 If you are going to dunk your head into the quagmire of American gun rights, there may be no better place to start than at a bar in Tracy, Minnesota on a Monday night.

And there may be no better person to speak to than someone like Paul: a retired local high school teacher, a grandfather, and a breeder of Hungarian Vizslas. He is also a member of the NRA, and has a concealed carry permit.

We took our conversation to Bonnie and Clyde’s, the only pub in town open on a Monday (and an appropriate venue, given Bonnie was dubbed a “cigar-smoking gun moll” by the Pottstown Mercury in 1934), after Paul asked a question and mentioned his NRA membership during the Tracy community forum held for WPI fellows earlier that evening.

I’d told him during the forum that I respected the gun rights of those in Tracy who farmed and hunted, partially because my in-laws did the same, but that the US should be ashamed by how many of its citizens are killed every year in mass shootings.

We sought each other out after the forum, elaborated on what we’d said and touched on Australian gun control post-1996, but as the crowd thinned around us, and it became clear we too would soon have to depart into the warm Corn Belt air, he asked: “wanna grab a beer?”

So we left the community centre, tucked in the middle of a small residential complex built to provide temporary housing after a tornado flattened the town in 1968, for the pub.

Once there, as I worked my way through craft beer, and he Canadian whisky and soda, the conversation became tense.

Several hours later, our heated conversation had been tempered only by the interjections of two young people with matching bright green hair who came into the bar on a date, and the occasional ditty from a local eccentric.

It is odd meeting someone whose caricature – in this case, the American gun nut – you feel you already know intimately.

I’ve been reading about this guy for years; Republican; an ardent love for and belief in the constitution, not just the second amendment; the Goodies with guns v Baddies with guns rhetoric; the oldest democracy on Earth defence; the conspiracy theories about government control.

He is no caricature, and to think of him and others who support gun rights as unwilling or unable to engage in meaningful and nuanced conversation about the issue – even if you’re at times left shaking your head while staring at the ground – does the seriousness of the issue a great disservice.

In saying that, I left the pub convinced there will be no meaningful change to US gun laws in my lifetime. There is too much ill-will on both sides, and the debate has been fermenting too long in something so wound up in the American identity: the constitution.

Not everyone, however, accepts this stalemate. Some people even have possible solutions. 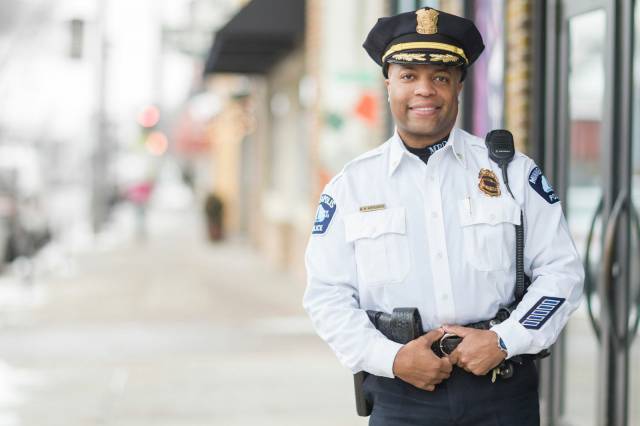 On Thursday, Medaria Arradondo, the Deputy Chief of Minneapolis Police (above), told us that there had been troubling increases in the number of non-fatal shootings in the city, but firearms-related homicides dropped.

“I believe there are far too many guns out there. [And] when we’re seeing these scenes of violence in the community now, it’s not three or four shots, it’s 30, 40 or 50 rounds.

“We absolutely can do much better with our backgrounds check, certainly we can do a better job with mental health screening.

The waft of fermenting constitution stung my nostrils again the very next day.

Republican Party of Minnesota chair Keith Downey and Minnesota Democratic Farmer Labor Party chair Ken Martin gave us a thoroughly convincing reenactment of what every discussion between a Republican and Democrat about guns has looked like for the past 50 years: a few minutes of empty bluster, followed by uneasy silence.

“Name the one law that would stop that,” Downey asks of Martin about mass shootings.

He is right, of course, as Martin acknowledges: there is not one law. But that is hardly the point.

As good a place as any to ponder it all is in my current Washington DC hotel room. It is, after all, just around the corner from a not uncommon American landmark – a place where a president was shot (Ronald Reagan, in this instance).

On Sunday night, to close out a week which started at Bonnie and Clyde’s, I took a walk to the White House.

Two young guys there were speaking to a security guard on the other side of the cordon.

One asked: “What about that person who was armed and went right up to the southern entrance? When was that?” When the guard gave a non-committal response, he asked: “Oh, are you not really able to go through the bullet points on stuff like that?”