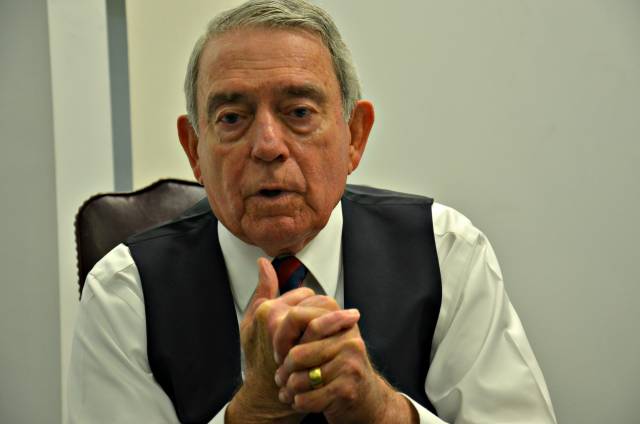 Dan Rather: U.S. reporting on the conflict is Israel-centric

It’s kind of strange to see up close someone who has been a familiar television face for me for decades. So, when Dan Rather looked me straight in the eye, I had to look around to see if everybody else was as starstruck as I was. I think they were.

Rather met with us for a candid chat on his career and insights for us Young Turks (some of us not so young, and even more, not very Turkish). He told us about his departure from the network (“I was too hot to handle”), his interview with Saddam Hussein (“He kept trying to hold my hand”) and more.

As expected, I just had to get an Israel/Palestine question in the middle of it all:

How has the coverage of the Israeli-Palestinian conflict changed over the years?

On several levels there have been tremendous changes. But in my personal opinion – which I must add is frequently wrong – the basic narrative is remarkably unchanged. This basic narrative, in my opinion, is that Israel, which is a country in which we have no small responsibility in helping to create — President Truman recognized Israel — is an island of democratic government and freedom. It’s not the mirror image of us, but the closest there is. It is constantly threatened by any number of combinations of its neighbors. And that’s the primary, basic narrative which has not changed.

Now, I would make the argument, and I think a lot of American journalists would, that it hasn’t changed because the facts haven’t changed. But I’m very aware that there are other people with different opinions about that.

But in other ways it has changed. For one thing, I’m old enough to remember that it was very difficult to report from just about any Arab country. Now, there are many more countries you can go in to.

The other difference, having said that I don’t think the spine of the narrative has changed, is that Iran has emerged as probably the most important Islamic power in the region.

I wish I had the solution to this, but I still think the Middle East is under-reported in some very important ways. Everybody on all sides seems to be frozen in reporting patterns of yesterday, rather than realities of today.

Can you give me an example?

I would say that in the average US newspaper, the number of stories that have an Israeli dateline will outnumber the number of stories from any other place in the region, except where there is combat. For example, during the Iraq war or now with Syria. So, in that sense, it’s Israel-centric. I think there are understandable reasons for that, but how many news organizations have a full time correspondent – never mind a bureau – that’s in Palestine? And setting aside that, having a full time correspondent or bureau, how many even send correspondents into the West Bank?

I don’t exempt myself from that criticism. But two years ago, we went to the West Bank and spent time there, and did an hour, trying to break that. To be honest, I’m not sure we succeeded but it was our effort to do so. And, predictably, we took some criticism for doing so.