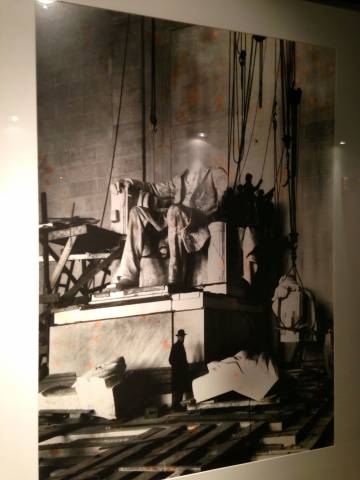 David vs Goliath: Politico looks to steal a march on once-venerable Post

“They says Americans’ past-time is baseball but I think it’s politics … We want to do for politics what ESPN did for sport … we’re here for obsessives and junkies”. Fighting words from Politico National Political Reporter James Hohmann — and just as well, for this is a fight to the death between the future of once-venerable institutions versus the anything-is-possible mentality from relative start-up competitors. Hohmann: “keeping the startup vibe is one of the secrets of our sauce”.

On Monday September 9 we visited Politico in Arlington, VA. Launched in 2007 with a free mass-audience version, expanded via PoliticoPro in 2011 (the latter a pay-wall site “connecting the dots no-one else is covering” on the substantive Washington policy front), the company is facing a “good problem” — they’re outgrowing their newsroom. Walking down the corridor towards the open–plan newsroom I was struck by a B&W image of Henry Bacon’s Lincoln Memorial … half-complete, it’s an apt metaphor for a company that doesn’t see itself as simply having ‘arrived’ with no more growth to come.

Moreover, in this age of media angst at a revenue model gone broke (think Craigslist and classifieds) it’s disarmingly refreshing when journalists tell you they understand “exactly our readers’ desires” and, better still, it doesn’t just sound like hype. Simply put, dedication to speed and accuracy is being appreciated by Politico audiences in spades — so much so the day WPI came calling Politico had just announced it was replicating its model in NYC.

Four might be unlucky in Chinese but it’s the winning combination for Politico on the revenue front: traditional print, online ad revenues, subscriptions, sponsored events. Fairly vanilla you might well say — and you’d be right — only they’re getting it right — consistently. Their owner just sold the TV division of ABC’s Washington affiliate for US$1 billion. Little wonder they’re grateful for a proprietor who’s assured them he’s willing to lose some money for long-term gain. Complacent, they’re not. Hohmann: “our mantra is to always remember that Hotmail was once hot. Now noone uses it”.

Cut to the Washington Post two days later. Eugene Meyer — one-time Post publisher, financier and Fed Chairman (1930-1933) graces the reception hallway, flanked by ‘The Seven Principles for the Conduct of a Newspaper’ (pictured). 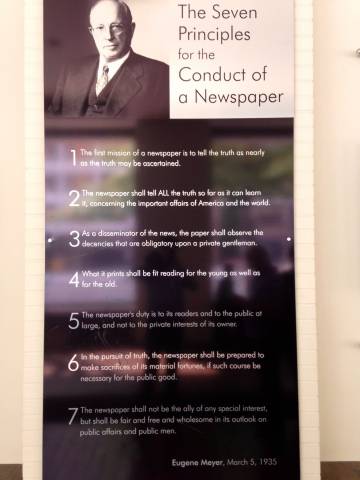 The seventh ‘commandment’ is telling in this age of specialist interest groups winning consumers’ hearts and minds: “the newspaper shall not be the ally of any special interest but shall be fair and free and wholesome in is outlook on public affairs and public men.” If it all sounds quaint and thoroughly otiose that’s probably because it is.

Flushed with relief at Jeff Bezon buying the Post for US$250 million, Executive Editor Martin Baron began with some opening remarks, surprising for their candour: “the Bezos acquisition made us the centre of the media universe for a while (emphasis added) … he was drawn by the intellectual and business challenge of a business model that’s broken and needs to be fixed. He’s not satisfied with the status quo and expects the Post to grow, increasing revenue and readers … He’s open to experimentation and wants management to come up with a lot of ideas … He doesn’t know anything about the news business. He has a full-time job as CEO of Amazon — a job he very much loves. The vast bulk of his time will be spent on that, versus the Post which is his private investment”.

Baron conceded the Craigslist point: “classifieds were snatched away overnight” and pointed to “more disruption to come in the area of video online”. So just how would the Post rise to the challenge?: “We expect to disrupt, rather than being disrupted”. Deflating.

I asked Baron about the disruptive threat posed by Politico. His brow furrowed even further and he fired back: “I think we need a reality check. Politico’s great at PR but they don’t do investigative reporting.” He then proceeded to reel off the Post’s focus on developing sources, following paper trails and exploiting “the 3rd weapon in our arsenal” — database journalism”, trumpeting the fact the paper now has more computer-assisted reporters than ever.

That might be true, Mr Baron, but so long as Politico continues to raid your newsroom and that of other behemoths like The Atlantic, it’s journalists and not just the public that are clearly voting with their feet and running a mile from you.