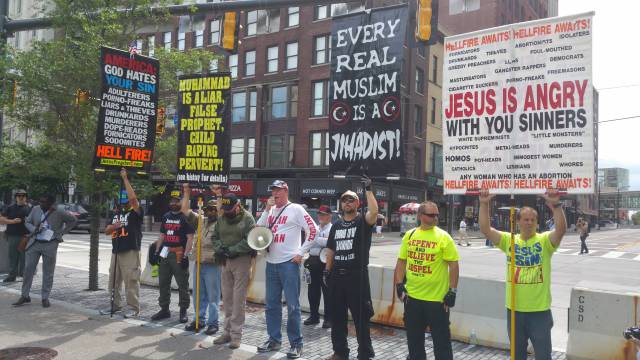 Fear and Loathing in Cleveland

I was still jetlagged when I arrived in Cleveland for the Republican National Convention. It was something of a culture shock to arrive in the town center, and even the locals told me they had never seen anything like it. They had been warned for weeks to stay away, and most did exactly that. My editor was anxious and warned me to be especially careful, with a caution usually reserved for only the most extreme assignments. I had no idea what to expect.

People had come to Ohio from across the country to share their messages. There was no violence, but various viewpoints were expressed loudly, colorfully, creatively, and with an outspokenness that I have rarely seen in any political campaign elsewhere in the world. Of particular note were the Westboro Baptists, a small group who travel around the U.S. year-round to spread their message against what they consider “sin”. The small but vocal group were at every turn, loud speakers in hand, usually seeking conflict with competing groups of protesters. They even showed up in Philadelphia during the Democratic National Convention.

Another similar group, made up exclusively of white men, were the Bible Believers. They waved signs advertising their opposition to everything from Islam to abortion to “fornication” and “sinning” in general. This group is best known for their regular picketing of Hollywood events.

Already on the first morning of the RNC, there were clashes between the Bible Believers and Black Lives Matters activists.

“In a few months, white supremacists are going to take over America!” a Black Lives Matter speaker declared on the main stage in Public Square, on the Monday. An older African-American man, he wore a blue t-shirt with the message, “America: You Haven’t Come that Far.”

A few metres behind them, the Bible Believers popped up, shouting “If you resist arrest, you might just get shot!”. The speaker was wearing a t-shirt that said “Allah is Satan” in bold red lettering. “Allah” is simply Arabic for God, for any faith, so his message was probably not what he intended it to mean. The Bible Believers, however, were not big on nuance.

It was my first time experiencing America’s “Cultural Wars” in the flesh, and it was gritty and more in-your-face than I had ever imagined.

For more of my reporting during both conventions, see my articles for the London-based Middle East Eye website here.