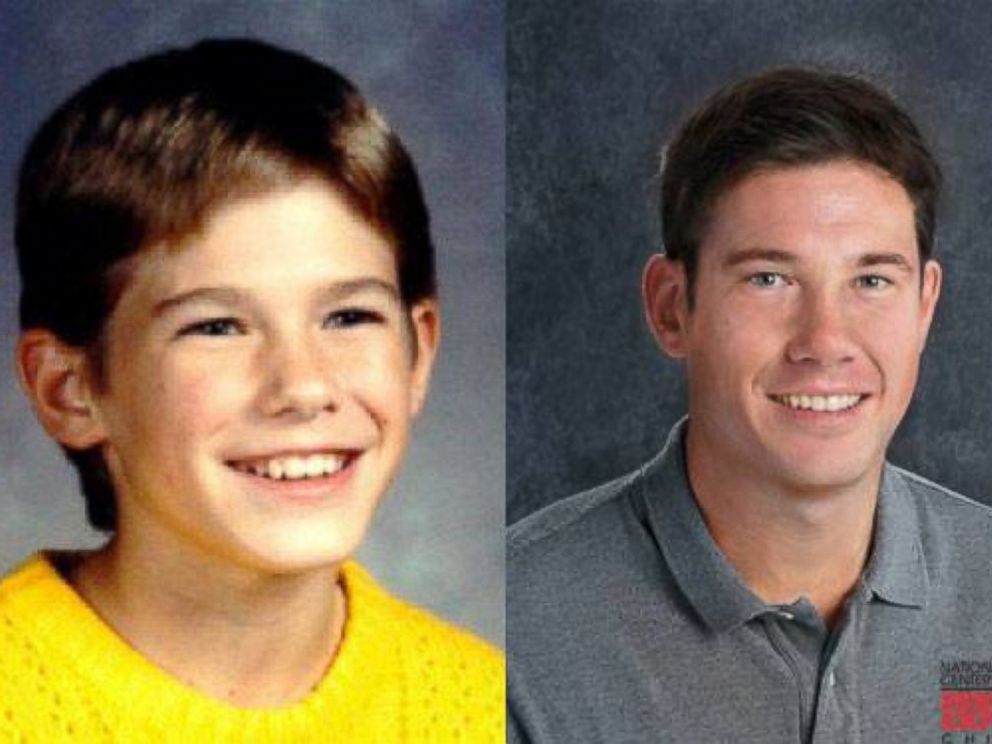 ABOVE: Jacob Wetterling when he disappeared, and a computer-generated image of how he may have looked as an 18-year-old.

My phone buzzed as I left Mickey’s Diner. I was swelled by half a chicken, coleslaw, baked beans and toast, and the soles of my shoes were caked in grease.

I reached for my phone and noticed I’d received an AMBER alert – a pop-up warning sent by police appealing for information about a missing child.

The alert related to a five-year-old girl who police believed may have been abducted from her home in Watkins, a town of about 1000 people north-west of Minneapolis.

I was mildly perplexed by receiving the message, as were my colleagues, and I hoped it related to a case that is most common when it comes to child abductions – an aggrieved parent taking a child that’s subject to a custody dispute.

It was soon clear it was something far worse: Alayna Jeanne Etrl had been raped and murdered, her body dumped in a swamp, allegedly by Zachary Todd Anderson, a co-worker of her father’s.

A few days later, not far from Mickey’s, while visiting Minnesota Public Radio, I learnt about the case of Jacob Wetterling.

He was another Minnesota child abducted from his home town.

On October 22, 1989, he was snatched while riding in St Joseph, which is only about 30 kilometres north of Watkins. He still hadn’t been found.

For all we knew, his fate was similar to Alayna’s. Or – as his parents believed – he could be alive.

When Jacob went missing, the thought that within a couple of decades everybody would carry small computer/phone hybrids in their pockets, which could receive messages beamed to them by police about a missing child, would have seemed almost inconceivable.

Almost as inconceivable as an 11-year-old being taken in broad daylight while riding his bike with friends less than a kilometre from his rural Minnesotan home and never being seen again.

Minnesotans were more than just deeply disturbed by the Wetterling case.

It was considered a direct affront to their way of life, almost similarly to how acts of terrorism are viewed.

Kids in Minnesota were not taken by strangers. They could go with their friends wherever they wanted. The countryside was almost painfully safe.

Chris Worthington, the head of MPR investigations, spoke to fellows about Jacob as the radio station was about to launch a podcast about police failings in the case.

The success of the Serial podcast worked media companies into a lather, but Worthington said the idea behind this podcast was slightly different: it was not a whodunnit, but an exploration of the investigation, what had gone wrong, what should have been done, and the legislative changes introduced as a result of the case.

The case forced changes in the system, although these did not necessarily result from any acknowledgement of the failings of the investigation. Rather, the changes were due to the advocacy of Jacob’s parents, Patty and Jerry.

The Jacob Wetterling act was established and mandated the creation of public registers of convicted sex offenders around the country.

At the same time as the case which prompted the changes was being mismanaged, and Jacob’s killer walked free, hundreds more paedophiles were being put on shorter leashes.

The MPR podcast generated huge interest even before its release, with a preview of the series devoured so many times that it remained in the top five of iTunes downloads for several days.

It was due to launch on September 13.

Nine days before that, the mystery was solved. Jacob wasn’t coming home.

He was found under half a metre of dirt on a farm in Paynesville, about 50 kilometres from where he went missing.

Police were led to the farm by Danny Heinrich, the man who killed and sexually abused Jacob within hours of him going missing.

There was an almost troubling pragmatism to how the case was finally closed.

Heinrich was in prison on child pornography charges.

He was the main suspect in Jacob’s death and the sexual assault of another boy, Jared Scheierl, four months after Jacob disappeared, but police did not have enough evidence to charge him with either crime.

A bargain was struck that satisfied the Wetterlings, police and Heinrich: he would plead guilty to one of the 25 child pornography charges he faced and be subject to a prison term of 20 years, would admit to murdering Jacob and lead police to the body, and would admit abusing Scheierl, on condition that he would never be charged with either of those offences.

Media coverage that followed the breakthrough was laden with grief.

“Finally, Minnesota knows,” was the lead paragraph of one Star-Tribune story.

Perhaps the saddest image that accompanied these thousands of words was not of Jacob smiling as a boy, or of his grieving family, or of flowers on a makeshift shrine in a quiet Minnesota street.

It was a computer-generated image of what Jacob would look as an 18-year-old.

An image of a person who never existed.