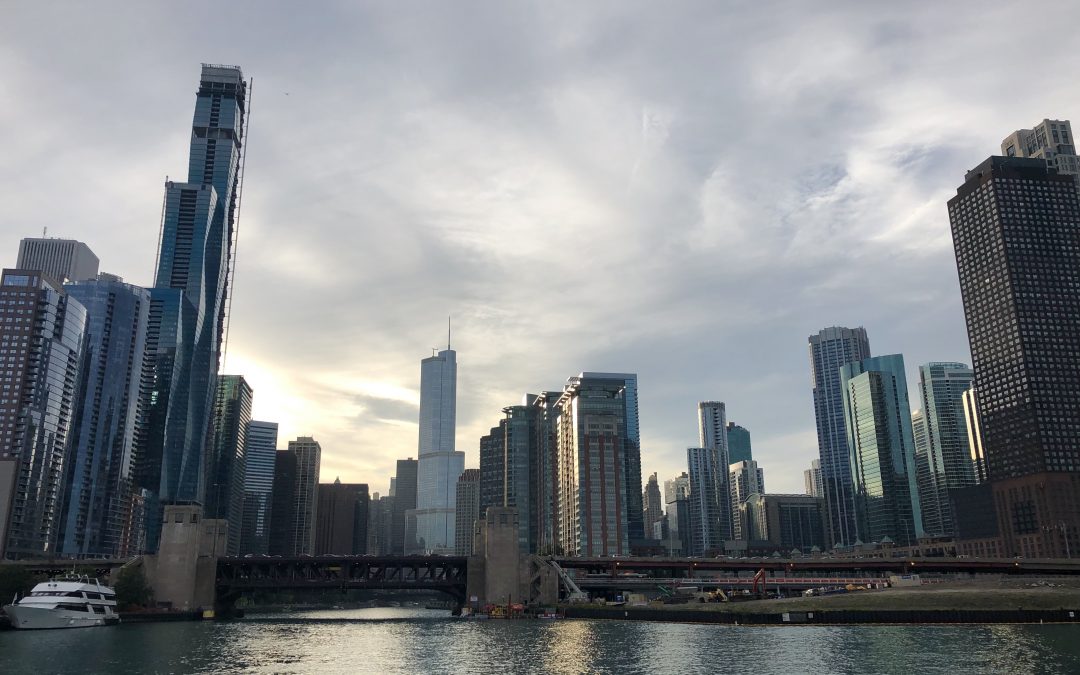 We visited nine cities from coast to coast in the past eight weeks – even more, counting Ely and New Ulm, Minn. None of the others made an everlasting impression on me the way Chicago has. That skyline is hard to forget. And it’s not just the skyline, it’s the story of overcoming natural, architectural and commercial challenges that few cities (in Europe, at least) had to face altogether.

We WPI Fellows were lucky enough to take the famous architecture river cruise, a 90-minute live history and urbanism lesson put together by Chicago Architecture Center, a nonprofit cultural organization that does tours, exhibitions, and events meant to prove why design matters. That group – founded in 1966 as the Chicago Architecture Foundation to save one historic building, Glessner House – has since gone on to educate and serve millions of tourists.

We learned that, in its early years, Chicago was one of the fastest-growing cities in the world. When the settlement was founded in 1830 on the southwest shore of Lake Michigan, there were fewer than 200 people. By the time it was designated a city seven years later, there were 4,000. From then on the population skyrocketed with wagon trains, boats and then trains bringing hundreds of thousands of emigrants to the Midwest and the endless opportunities it offered.

There were 300,000 residents by 1871 – a year forever engraved in any Chicagoan’s mind because it changed the course of history. It’s the year of “the Great Fire,” which lasted for three days, killed 100 people and left 100,000 homeless. A third of the city’s wealth was reduced to cinders. Legend says the fire started in a barn. (Watch a History Channel animated reconstruction of the fire here.)

Three days later, reconstruction began, using the latest building materials and components, and with that, the boldness in engineering and architecture. For example, until the mid-19th century, commercial and residential buildings were never taller than five stories. After the fire, Chicago got the world’s first skyscraper, completed in 1884: the 10-story Home Insurance Co. building.

After the successful World Fair in 1893, when more than 27 million people visited Chicago, new challenges had to be tackled: consistent urban planning, and reclaiming the waterfront for the people. It’s when the 1909 Plan of Chicago came about, and a famous phrase was uttered: “There should be no commercial development on Chicago’s lakefront.” That phrase would come back to guide Chicago over and over again.

Daniel Burnham, one of the plan’s two authors, had studied in Paris and been inspired by what that city had done in the 1860s, which was to tear itself to the ground and rebuild itself into the city we know today. That was his vision for Chicago: that it become Paris on the Prairie. The first thing he did was to move the docks and industry further up by the lake.

Sewage and sanitation were another great challenge that Chicago had to face throughout its history. In the first stage, all waste flowed from the Chicago River to Lake Michigan, the city’s source of clean drinking water. In an effort to save the city from typhoid and cholera, which were killing hundreds of people, engineer Sylvester Chesbrough suggested that Chicago reverse the direction of its river away from the lake and toward the Illinois River, now considered one of the engineering wonders of the world. (Watch a WTTW Chicago animation here.)

And these are, of course, just a few of the things that make this city of 2.7 million admirable and worthy of respect. I know for sure that I will be keeping an eye on what Chicagoans are up to next.