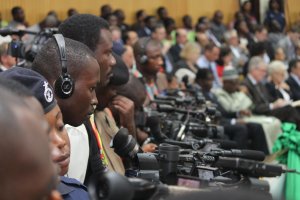 I know my rights! That is usually the first phrase that comes from the Journalists in my country gripped by the law even if he or she falls foul.

Usually they refer to the 1992 constitution’s provision for freedom and independence of the media:
All persons shall have the right to-
(a) freedom of speech and expression, which shall include freedom of the press and other media;

I am told in America, it is the ‘first amendment’.
Coming from a country trying very hard to consolidate its democracy based on a constitution, sometimes I wonder if journalists which I am included know better than the writers of the constitution.

Do we know too much or we have just refused accept that the same constitution guaranteeing the freedom of the press and must also the citizens.

When parliament of Ghana in 2001, unanimously repealed the Criminal Libel and Seditious Laws, the expectation was that journalists would do themselves and the nation a lot of good, if they reciprocate the gesture through the practice of responsible journalism.(modernghana).

But it is the opposite,12 years after. A classic example was when an editor of a newspaper was jailed for contempt by the Supreme Court.tv3network.com/Politics/contempt-of-court-kuranchie-atubiga-jailed-as-boahen-escapes-punishment.html

I look forward to know more about the American experience from the big newsrooms i.e New York, CNN, Star Tribune etc we will be visiting.