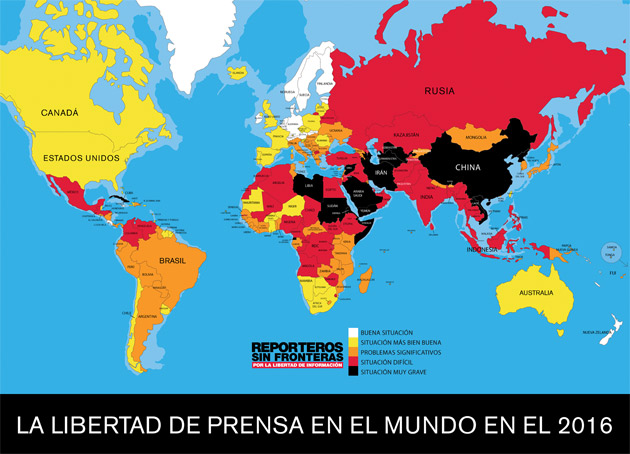 Freedom of the press: how much is enough?

As journalists we must always have in our minds two words: accuracy and freedom.

The first one: it’s our duty to be just/righteous with each part of our stories, be balanced, and attached to the facts. But for the second one, I just noticed that sometimes we forget its importance.

I’m thinking as a Mexican journalist. We occasionally don’t remember the exact meaning of freedom. It’s not only to have the opportunity to write something and to be published, it is also our right to work safely, under the best conditions, and knowing that our work will have a result: it will have some implication over the public opinion.

Mexico is not a free country for the press. Journalists face censorship in many ways and as a World Press Institute Fellow I noticed that many people around the world don’t really know (or can’t imagine) that our country —a Western democracy— is facing so many kinds of violations against freedom of the press.

First. Violence against journalists. Only in the period January-August 2016 eight journalists have been murdered. Article 19, a NGO dedicated to protect freedom of the press, also denounced that there are at least records of 150 attacks against journalists: threats, harassment, or physical attacks.

Second. Big news outlets/media don’t really care about the working conditions. A journalist in Mexico might have salaries 200-300 usd per month with assignments that last 12 to 15 hours per day, obliged to write five (or more) notes each day. And that’s in Mexico City, while in the states the conditions can be even worse: Gregorio Jimenez, a Veracruz’s journalist murdered in 2014, received 20 Mexican pesos —1usd— per piece… Yes, only one dollar.

This second point is related to the first one: the news outlet don’t really care about the security of their journalists. Most of them work without insurance or any kind of security measures even though they work in violent zones.

Third. Censorship and the relationship media-government. Great amounts of public money is spent each year in government advertising in all kind of media. In many cases (almost all) the media survival depends on this money.

It is common to see texts that are actually paid reports, but the media won’t report them as paid. This notes are presented exactly the same way as any other news. And it is also common to find headlines openly defending the government.

Fourth. Nothing happens. Recently, a minister said that the newspapers in Mexico only work to scare away flies. Maybe she is right. When a great work about corruption, human rights’ violations, or abuse of power is published in Mexico, nothing changes. For our president and his ministers it’s enough to say “I’m sorry” and everything returns to be the same way it used to.

In Mexico we have many journalists and projects fighting each day against any form of censorship and intent to stop freedom of the press.

Our responsibility is not to accept only “one part of freedom” but to work to be a country full of it.

And here is a commercial (sorry): because I truly believe in a free journalism, I’m part of Animal Politico, an independent digital media based in Mexico City.

In Animal Politico we believe in a free journalism and we know that our readers deserve it and are fundamental for it.