From A to B 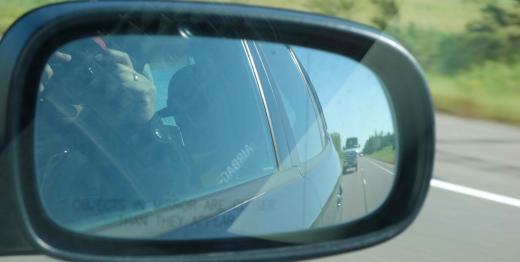 It was meant to be titled ‘Driving in America’, but since it took me so long to write this entry, I have since then found other ways to go from A to B in this country. Hence, the change of title. And even though there will be quite a bunch of airplanes in our schedule, when it comes to enumerating our rides I’ll keep my feet to the ground for this time being.

But of course, the star of the whole thing is the van. THE van. A Ford E Series Van. We’re talking about a member of a line of vehicles so successful that it has been coming out of the assembly lines since 1961 and now holds 79.6% of the van market in the United States.

The first thing you noticed about the thing is that is big. So big, in fact, that when we arrived at The Star Tribune the guy at the entrance said: I didn’t know you were bringing a BUS!!! We all have been somewhere in the backseat of it, asking for more AC or for less. But only four of us have been driving it. I have been one of them.

I can’t tell you exactly why I volunteered to drive it, but I can tell you it’s been another educational experience. Not only for the act of driving it in itself, but because when you are behind the wheel you get to learn about how do Americans drive.

Now, remember: I live -and drive- in Bogota, so this is mostly an exercise of comparison. With better highways, better signals and, for the most part, better drivers, it should be easy to say it’s much easier to drive here than in the chaos of another countries’ cities and highways. Yet, that is not always the case for me.

First, because of the speed limit, that can be much higher than in Colombia. And it doesn’t help if you’re trying to keep the van in David McDonald’s rearview mirror. He’s FAST. And of course, since most of the time you have absolutely no idea where you’re going, you depend on the vehicle you’re following. If you learn too late that you WERE supposed to take the curve even no blinkers were involved in the process, your passengers are bound to get close one to another, and some of them are bound to get close to the walls of the van.

A powerful machine, it took us to and from Ely and the Muscatine. We learned to like it, but we also learn to be glad when leaving it. Yet, when it started raining cats and dogs in Charlotte, I’d bet not one of you would have wished for our van to be parked just nearby.

I’m glad I drove the van. And I am glad I was picked before our test drive in the NASCAR race. I don’t think I would have made the cut after that.

After the van, came the bus. And after the bus, the metro. While looking forward to a train ride all the way to New York, I am about this close to pay for a Segway ride in Washington, because you never know what will be your next lesson when the rubber hits the road.