How Local Breweries connect our communities and tell our stories 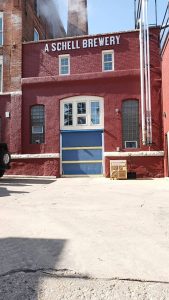 Growing up in Lagos, Nigeria, my parents played a popular song by South African singer Yvonne Chaka Chaka, Umqombothi to celebrate a special occasion or just another Saturday evening entertaining friends with palm wine and bush meat. Umqombothi is a locally brewed Xhosa wine in South Africa. Just like the palm wine and ogogoro in Nigeria, and banana wine in Rwanda, these locally brewed drinks bring communities together and cultures are woven around them.

On my first visit to Rwanda for the Ubumuntu Art festival, marking the end of the 100 days commemoration of the 1994 genocide against the Tutsi. Hope Azeda, the curator of the festival, invited us all to her house and introduced us to banana beer. All of us East and West Africans, Europeans and Americans remain connected since.

Our local brews give us a community, culture and storytelling.

Minnesotans pride themselves on their varieties of craft beer, and although Schell Brewing Company is a large business today, its origins were humble, invoking all these memories in me once again.

On a recent tour of the brewery, we learned Schell’s brewing company is a family-owned local distillery in New Ulm, Minn. which became the oldest and largest in the state. The founder, August Shell was born in Germany in 1828. As he travelled to work every day, he noticed the local taverns had no beer, so he decided to brew some himself. He remembered that back home, the four key ingredients were water, hops, barley and yeast. He invited friends over to try his first batch. They found the mixture awful. Determined to find a community around his homeland’s local brew, he travelled to St. Paul, Minn., to learn how to make beer. He succeeded.

But the brewery did more than just make beer.

During the Dakota War of 1862, New Ulm became a central point of the conflict. While many properties were destroyed, the Schell buildings were spared because of the kindness and friendship between the Dakotas and the Schell family.

That tradition of kindness seems to be continuing in Minnesota.

Recently, America’s first Black-owned distillery, Du Nord Craft Spirits, located in South Minneapolis, began producing hand sanitizers during the pandemic. In addition, despite the fact that the distillery was partially destroyed during the riots after George Floyd’s murder, Du Nord’s owners launched a foundation to help rebuild the community.

In African cultures, local wines have a unique historical context. They are used to mark cultural milestones, as markers to pass stories along generations, and for worship. Tributes are paid to our ancestors through the pouring of palm wine as libations to ward off evil, untoward spirits or energies around us. Though these local brewers are not privatized and grown into large industries, their cultural value cannot be understated.