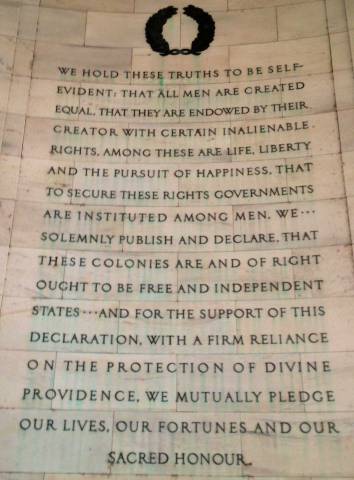 Ignore the Founding Fathers and Friends at Your Peril

Of all the monuments in Washington D.C., perhaps the most significant is that dedicated to Thomas Jefferson, one of the Founding Fathers and third President of the United States. Significant, because it is the only monument paid for in its entirety by Congress (the princely sum in 1934 of $3 million). President Franklin Roosevelt laid the cornerstone in 1939 and officially dedicated the Memorial on April 13, 1943 — the 200th anniversary of Jefferson’s birth. FDR fervently admired Jefferson and wanted to be able to see the Memorial from the Oval Office. The site — directly south the White House — delivered on request.

Flanking Rudulph Evans’s statue to Jefferson, that unalienable truth from the Declaration of Independence: “… all men are created equal …”

A few miles along the National Mall one comes upon FDR’s memorial, spread over some 7.5 acres. Of all the myriad memorial walls, one in particular caught my eye: “I never forget that I live in a house owned by all the American people and that I have been given their trust”. In that maxim, methinks FDR is saluting both Jefferson and the opening line of the Declaration. 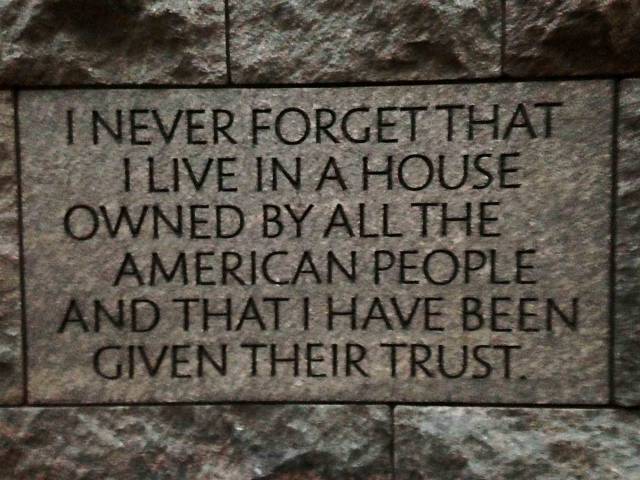 Hold those two principles tight: all are created equal … government is owned by all the American people … those who engage in politics do so at the behest of the people.

Cut to September 10 2013 and an audience with Keith Ellison — U.S. Representative for Minnesota’s 5th congressional district, serving since 2007 and a member of the Democratic-Farmer-Labor Party, the Minnesota state Democratic Party affiliate. As the first Muslim elected to the Congress and the first African American elected to the House from Minnesota he has certainly blazed a trail.

With the Syrian surgical strike question swirling, it was natural enough for Ellison to state his position: 9/1, he declared, his constituents opposed any U.S.-led intervention, yet “I know more than any of them do because I’ve seen the intelligence documents and they haven’t, so I’m backing Barack”.

All created equal? A house owned by all the American people? Ellison’s defensive posturing when challenged over this dichotomy was striking: from cool-as-a-cucumber Congressman, jauntily perched on the edge of his partner’s desk, to finger-jabbing-street-fighter, all semblance of civility suddenly gone. 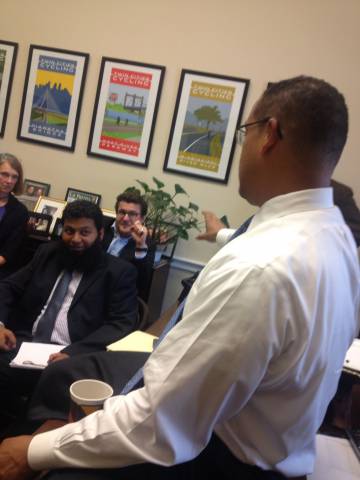 “So what if I’m voted out? I’ve plenty of other job offers out there” came his riposte — hardly the words of someone who sees politics as a higher calling. Ellison’s pitch to the heart-strings (pointing to a framed photo of one of his sons serving in the military with a “do you think I want to have that on my conscience if given half the chance?”) was an affront, when you consider all members of the armed forces join up, implicitly, wanting to fight: it’s their raison d’être and arguing the opposite is simply disingenuous.

I’m reminded of having a ringside seat on history in the late 1990s in the Australian Senate, as the Independent Tasmanian Senator Brian Harradine wrestled with his conscience and the views of his constituents before deciding to deal in 1998 because he feared a possible “race-based” election. As the veteran former Age correspondent Michelle Grattan recalls: “Harradine’s extraordinary career is testament to the power of one in an era when most non-frontbench MPs are little more than foot soldiers.” (http://www.theage.com.au/articles/2004/06/29/1088487962306.html).

Keith Ellison would be wise to go back to those who voted for him and work on bridging the gulf between what he believes is sound evidence over Syria and the tidal wave of opposition from those who voted him into office — replete with a retinue of 14 staffers.

The image of MLK looms large on Ellison’s office sideboard. A walk past the Jefferson and FDR memorials leads on to that of Dr King and this inscription: “The ultimate measure of a man is not where he stands in moments of comfort and convenience but where he stands at times of challenge and controversy”. 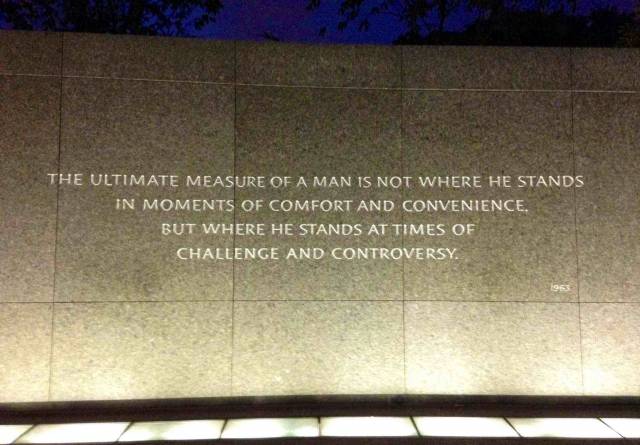 Being a mere pawn of one’s party is hardly something to be proud of. Walking the democratic route is.