We had just wrapped up Judge Tunheim’s JFK Masterclass Thursday when news came through that David Cameron had been dealt a humiliating defeat in the House of Commons on Syria — forcing him to rule out British participation in any assault.

It was only after reading further (The FT’s Gideon Rachman calling it “the most spectacular defeat of Mr Cameron’s political career,” with political analysts — searching for precedents — declaring this is the first time a UK prime minister has been defeated in parliament, on a matter of war and peace, since 1782), that I started to appreciate the implications across the Atlantic — implications that came to the fore today.

Standing in the Rose Garden at the White House, Pres. Obama intoned: “In a world with many dangers this menace [Syria’s use of chemical weapons] must be confronted”. In the next breath, with Pontius Pilate-esque aplomb, he washed his hands of the problem, passing decision-making on “the worst chemical attack of the 21st Century” to a 535-member Congress. He promptly left the White House with VP Biden in tow to play golf at Ft Belvoir.

Consider the following timeline: reports emerged of the chemical weapons attack in Syria on August 21. Barack Obama and Mr Cameron spoke at 4.30pm on Saturday, August 24, according to people familiar with the situation. The U.S. president made it clear he wanted a swift military response – before global outrage dissipated and Bashar al-Assad’s regime had the chance to prepare its defences. The possibility of staging cruise missile strikes the following weekend was discussed.

Pres. Obama has done precisely the opposite of what George HW Bush might have done (“gone wobbly”) had Margaret Thatcher not intervened to stiffen his spine after Saddam Hussein invaded Kuwait in 1990.

The Cameron connection is critical. His “intervention” is now largely confined to Twitter messages; minus backing from the British parliament, there can be no real “spine-stiffening”, since the “special relationship” is temporarily in hiatus.

But Pres. Obama should take comfort from history. As Gideon Rachman points out:
The “special relationship” has gone through cycles in the past. Britain stayed out of the Vietnam war but then cleaved much more closely to US foreign policy during the Thatcher and Blair years.

A glance across the Channel also demonstrates how transient diplomatic and political moods can be. France rallied the opposition to the US-led Iraq war in 2003. But the French government was among the first to call for a military reaction to the use of chemical weapons in Syria – and may yet participate in US-led strikes. The spectacle of a joint US-French operation in Syria might then cause a degree of anguish in Britain.

The situation we confront should come as no surprise. Nowhere more than in defense and foreign policy did Margaret Thatcher’s own “Thatcher’s Law” apply — that in politics, the unexpected always happens. Put simply, Margaret Thatcher believed one must always be prepared and able to face whatever happened to come one’s way.

An aside on that score: 11 years ago I asked Thatcher to inscribe her “Law” inside her book Statecraft. The Iron Lady was true to her sobriquet: she had just had a stroke days earlier but still fronted as guest of honour at a gala dinner at London’s Savoy hotel. Official book signings were off the agenda, as was any prepared speech (she couldn’t help herself and grabbed the mic for a barn-storming flourish to end the night). But a combination of the event being on my birthday (extra Dutch courage?) and the fact I was sitting alongside the couple that selected her to represent the seat of Finchley (MT elected as MP in 1959) who suggested I approach the top table “between dinner and dessert — when she’s in her best mood” got me my quote. 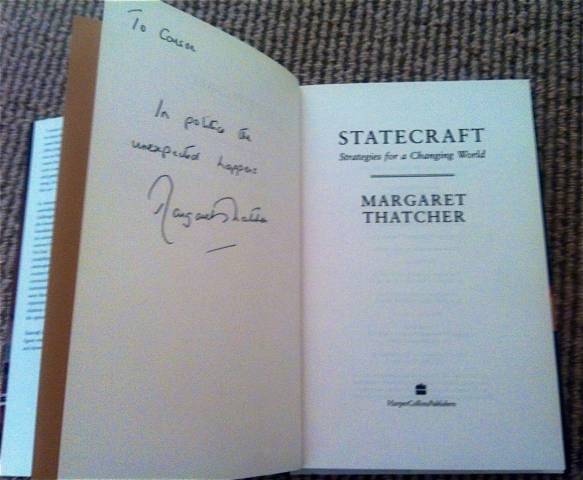 So the unexpected has happened. Yet portents for how Pres. Obama emerges from future dealings with a war-weary public and legislature wary of being railroaded into military action do not look good. With his own red line on chemical weapons now compromised by delegating decision-making to Congress (and the spectre of Republican-inspired impeachment proceedings being launched if he loses the vote but strikes regardless), the president’s foreign policy legacy is looking ever-more tarnished.  Australia might currently be mired in the fag-end of a Federal Election campaign, but it has every interest in the outcome of Obama’s Greatest Challenge.