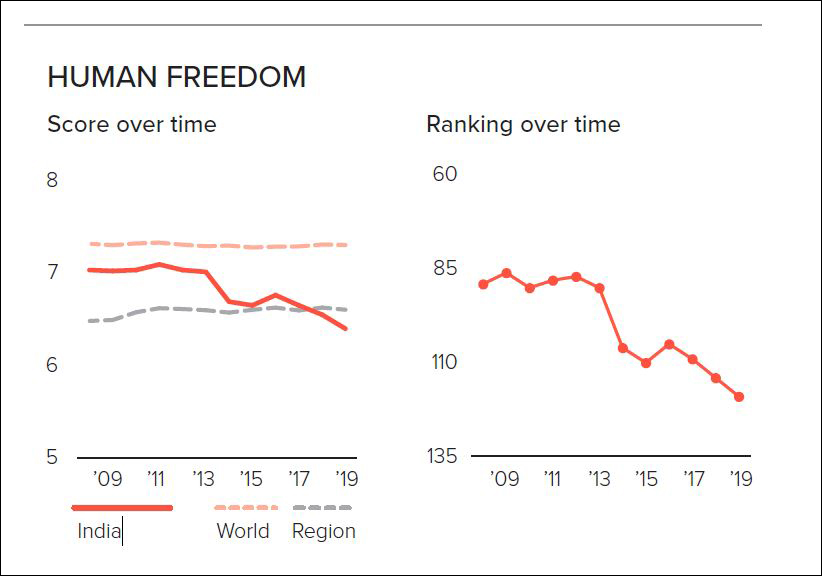 India has shown a near-constant decline between 2013 and 2019, in various parameters of personal, civil, and economic freedom measured in the Human Freedom Index, and since 2008 it’s had “the biggest drop.”

The Index, co-published by the Cato Institute in the United States and the Fraser Institute in Canada, is a resource that offers to help objectively observe relationships between freedom and other socioeconomic phenomena.

“If you look at India and how it’s ranked, the graph over time nosedives. I believe it’s the country with the biggest drop in human freedom, since 2008. Other countries are way below and so on, but in that period of time, especially after [Narendra] Modi, this has happened,” said Ian Vasquez, the Cato Institute’s vice president for international affairs, at the think tank’s Washington, D.C., headquarters.

The far-right, majoritarian BJP-led Narendra Modi government has been in command of the Union government in New Delhi since 2014.

Through the Modi years, India has been on the decline in other key indexes — computed by various international think tanks — measuring press freedom, economic freedom, academic freedom, and internet freedom.

The Modi government has repeatedly been accused within India of being responsible for such downfall by promoting communal, even racial, inequity.

“The parties that are opposing Modi are also proposing stuff that is anti-freedom. So India is in a mess right now,” added Vasquez, referring apparently to the national Opposition space in India occupied largely by the Indian National Congress and 16 other parties with faith in various forms of socialist populism. As a libertarian think tank, Cato Institute supports a political philosophy that advocates only minimal state intervention in the free market and the private lives of citizens.

For those wondering how the United States ranked, it tied for 15th with Germany and Japan.

The report states that 83 percent of the world witnessed a decline in freedom between 2008 and 2019, representing “a disturbing trend” that is yet to factor in COVID-19 and related restrictions.

“The issue with the Index is that the data necessarily is lagged by two years, so what we have measured in the Index is 2019 data. We are starting with 2020 data, and we can already see a decline in economic freedoms, which is what we are starting out measuring,” said Vasquez, responding to a question on how the pandemic worsened levels of human freedom in India.

The report suggests a “strong relationship” between freedom and economic prosperity. The freest countries — including the top five: Switzerland, New Zealand, Denmark, Estonia, and Ireland — enjoy more than twice the average per capita income of those in the other quartiles.