Inertia is not That easy 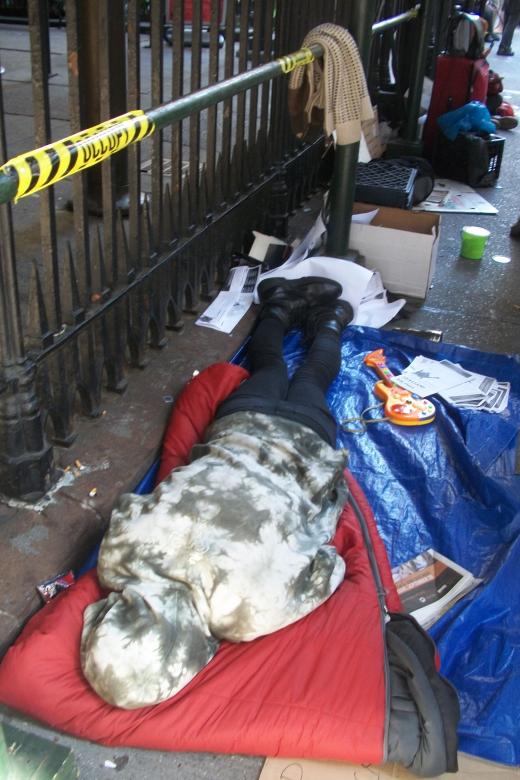 Sleep deprived, our starved selves had once again taken refuge in the ever trusted black coffee to march on. From the subway to our next destination. Fatigue and city hopping has blurred our comprehension, enough to not be able to distinguish one city from the other. What remains constant is this inertia, to hop and to ask question (by now almost drab and repetitive).

As we walked in, the scene at granite-lined, Zuccotti Park in Lower Manhattan, New York City, the plaza that became the first encampment for Occupy Wall Street protestors was equipped with all poosible tools of a protest sight. The police had assembled in riot gear at corners that overlooked the “drummers’ circle, very famous for their noisy protests: banging drums, cowbells and upturned frying pans.

For ten of us journalists, it was almost a nerve wrecking, embarrassing moment. We did not remember or register that it was the first anniversary of Occupy Wall Street. The metal barricades had already been erected early in the morning to curtail the protestors’ attempts to occupy Wall Street. A small brass band played “Happy Birthday” as handfuls of confetti rained down. Many wore party hats in honor of the movement’s anniversary.The bagpiper played on as we merged into the crowd, awe struck, simmering, both with excitement and the anxiety of unpreparedness.

Since it all began in November, 2011, Occupy Wall Street never failed to entice the naive, revolutionary pocket in my brain. Something that is attempting to change; has the potential to change. Where the ‘99 percent’, the masses, rose against the ‘one percent’, the influential rich. A movement for economic and social justice. When a group of young people harnessed the power of a disillusioned United States of America and took to the streets chanting about corporate greed and inequality. Ready to battle the state morally and practically. Their encampments were broken up and they lost a gathering place,leaving Occupy without a permanent home to organise, strategise. They stayed on when new rules were instituted that barred protesters from bringing sleeping bags or tents back into the park. Yet, to say whether Occupy was a success or a failure depends on how one defines it.

The first protestor who came my way spiced up my taste buds. I always feel jealous of the sexy, blatant, stylish, in-th- face protestors(primarily for my lack of grit) This one was in a lingerie with a sign, ‘Naughty bankers need a spanking and jail time.’ There were other costumes too – a large, ghoulish Statue of Liberty that has been a common picture in 2011, as well as a more topical “Bain Capital”, a reference to Mitt Romney’s former employers. The costume was based on the Batman comic book figure, outlandishly large with one particularly bulky hand labelled “Mitt’s fist”. Then a man wore a giant cartoonish head of board game character Mr. Monopoly bellowing anti-greed messages. Occasionally, the group of marchers peeled out of the park and began marching along Broadway, scattering tourists and passers-bys like us, who were busy taking quick notes, mental and physically written and hazy, rushed pictures.

Young and old, peppered all across, they waved banners diversed, yet focussed: “Less Fascism, please,” ”Health care is a human right,” “Obama’s a nice guy but a bad businessman,” “End capitalism.” Others lamented high rates of student debt and foreclosures. There was a dose of humor amid the angry chants for an end to financial inequality. they chanted, “We’re still here!” and “We are the 99%!” as they jostled with police and commuters trying to squeeze through barricades to reach work.

Occupy has been criticised and valourised for many things. While last year, some protestotrs were arrested for for attacking police officers, defecating on a police car, defecating on an American flag, the conservatives have pounced on them for using slogans like: “Soon, the poor will have nothing to eat but the rich,” “Money hungry fascist bankers,” “One Nation Under Greed,” “Kill or be killed.” They have been accused for their hippie style, nomadic, spontaneous style instigated by socialist, communist, Marxist and World Workers Party organizations.

The protests were also attacked for their oxymorons. They were judged for raging against “corporate greed,” but spreading the word out by using the products of large corporations such as Apple, HTC and Samsung smartphones. For using Social Networks like Facebook and Twitter, using Panasonic and Kodak cameras and wearing Levis- Strauss jeans at the sight of protest.

In fact, Louis DeBroux,the chairman of the Bartow County Republican Party and a commentator, last year described the movement as: “For the past few weeks, America has been treated to a steady news coverage diet of Occupy Wall Street, a motley amalgam of former hippies, idealistic but misinformed college students, Marxist advocates, seekers of mayhem for mayhem’s sake, and the just plain clueless. Welcome to the Flea Party, the far left’s answer to the organic uprising of the Tea Party. However, that is where the comparison stops. Whereas the Tea Party uprising has been peaceful, the Flea Party has been a study in anti-social behavior masquerading as noble civil disobedience.”

However, since last year, the movement grew too large too quickly. Without leaders or specific demands, what started as a protest against income inequality turned into an amorphous protest against everything wrong with the world. Mark Bray, a spokesman with Occupy Wall Street made statements about how the movement had the disadvantage of having been catapulted to fame when it was still in its fledgling state, before it had time to organize its political leanings and offer the sort of message that keeps a movement relevant. “It does become a sounding board for a lot of anger, which can be misdirected.”

Some onlookers at the first anniversary too criticized the movement for what they called its lack of focus and failure to use an election year to back particular candidates or adopt specific issues. the participants still saw hope. Guarding several anti-corporate posters, gobbling quickly on the leftover spaghetti from last night, dressed in bright t-shirt and complicated hairdo, Tina Campbell, who had come from Philadelphia for the anniversary poses with full alacrity when I try to click her picture. She had not expected such a turnout. “I was pleasantly surprised, because you just never know. Americans are a little complacent,” said Campbell, who described herself as a longtime activist. “I feel like there’s got to be bodies in the streets for Americans to wake up.”

However, Hefferson Moighan, who had travelled from an hour outside New York City to attend the anniversary says his participation had dwindled since November last year. “Honestly? It’s a bit dead.” He is unimpressed with both numbers and tactics. “We planned too much in advance, so police know what we’re doing,” he said.

But the movement’s loyalists say policy statements never were part of the plan. “In my mind, it didn’t set out to accomplish X, Y and Z,” said Mikell Kober of Brooklyn, who had joined a break-off group of protesters outside a Bank of America branch on Broadway. Rather, she said, it “was about creating a public space where people could gather and have a conversation about the things that need to change.” She also told media organisations that Occupy’s refusal to go mainstream by appointing “leaders” and adopting specific issues had led to some fracturing of the group.

A study conducted by occupywallst.org suggests that the 13 percent of supporters who are unemployed and only 50 percent who have full-time jobs. Clearly, the Occupy Wall Street supporters are young, poor and are looking for something to do—a dangerous combination, indeed.

“Our problems aren’t solved, our problems are plaguing our society,” said Kanene Holder, an educator living in Harlem who has been a part of Occupy since the early days.”The reason Occupy started was because our systems were so broken,” she added, citing the influence of money in government following the Citizens United ruling, a common Occupy gripe. “It doesn’t matter how you protest your government, or demand what you think you deserve. Do it.”

In our petty, chance-25 minute encounter with the protestors, one could still soak in resilience. By the evening, more than 100 people were arrested, most on “disorderly conduct charges.”

For a movement that is only an year old, it may take many years for it to develop and figure out exactly who their enemies are. Yet the continuity is still omnipresent, even though its jaded.

We walked past them for an appointment in a high rise building in the vicinity of the protest sights. I learnt that its okay to have fractured coherence and its fine to repeat questions. Sometimes, its okay to be supported by black coffee and ‘do it’ for the sake of inertia.