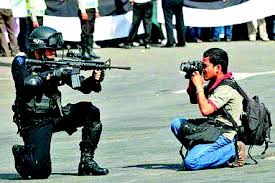 Journalism – one of the most dangerous professions in the world

What do you think are the most dangerous jobs in the world?

This is a random question I asked people on the streets of New York City. And guess what the answers were: “Police, Military, body guards…”

Well, we may think of these and even more like firefighters, astronauts or perhaps fishermen, but few of us would believe that journalists face greater dangers for reporting the news.

According to the United Nations, “Journalism is one of the most dangerous professions in the world.”

Journalists go out to the streets to explore and report what is happening. Unfortunately, in this profession, the stories covered may result in kidnapping, assault and even death.

“Violence against journalists has reached unprecedented levels, and the situation is now critical,” said Terry Wolkerstorfer, an educator and retired journalist, during a briefing to WPI Fellows at the Newseum in Washington, D.C.. 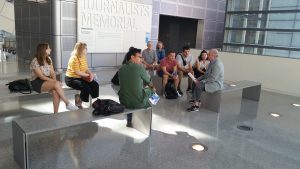 Until relatively recently, outside of war zones, journalists usually didn’t have to worry too much about their safety. But journalists today are facing a whole new set of occupational hazards, from relentless harassment, to mass arrests to assassination.

“In the past 12 years, more than 1,000 journalists have been killed for reporting the news and bringing information to the public. This is alarming. And in many cases, the killers go unpunished,” Wolkerstorfer added.

The big concern now is the problem is no longer limited to countries well-known for muzzling free speech and harassing independent media.

“The number of countries regarded as safe countries where journalists can work in a proper condition in complete security is declining month after month, year after year,” said Pauline Adés-Mével of Reporters Without Borders at the launch of this year’s press freedom index. “We’ve seen that authoritarian regimes are tightening their grip on the media everywhere. This is extremely worrying. Information is a right in theory, and in practice, it is not anymore.”

India may be the world’s largest democracy, but journalists say the room for critical coverage and dissent is shrinking.

“People who report for local media, government does not even recognize them as journalists. They tell them we know we can handle you very well. And when it comes to News papers, it’s worse. If you refuse to do what they want, they ban you, they stop giving you business. If you criticize them, they shut down the news paper. So, news papers which were printing 20 pages, now print only 4 pages.” said Hakeem Irfan, a WPI fellow and Economic Times reporter.

Last year’s killing of Shujaat Bukhari, senior journalist and founder of Rising Kashmir, a national daily, still weighs in Irfan’s mind.
“His case remains unresolved. Government says he was killed by the militants, claims militants have since denied. And this is not the only one, there has been a number of cases where journalists have been killed softly for doing their job. It is not easy to do journalism in Kashmir”

The situation is similar in Belarus. Online Journalist, Hanna Liubakova, also a WPI fellow, says they work in an intense climate of fear.
“The situation for press freedoms in Belarus is alarming,” she said. “This is not new but something very dangerous for the future of journalism. They are trying to gradually limit the space for freedom.”

In the United States, no journalists have been imprisoned for their work. The media here generally enjoy the most robust protections in the world for press freedom. But Trump’s daily attacks against the mainstream media are making things worse for journalists. With his near hourly fits of rage against the media as the “enemy of the people,” free press advocates worry that Trump’s vitriol toward journalists is sanctioning, if not outright encouraging, violence against media institutions at home and abroad.

Journalists’ work is to inform the citizens by telling the news, which is the material we use to think about the world’s happenings beyond ourselves. As any other job, journalists do not deserve to be threatened for practicing their profession. Journalists deserve more protection for informing the world.