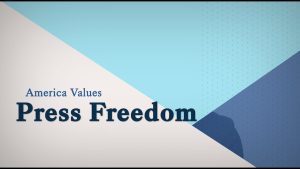 None of the content of that long list matters when it comes to journalism, according to the number of professionals we talked to in the past week as part of the WPI Fellowship 2022. If there is anything that The New York Times, The Wall Street Journal, NBC and ProPublica can agree on, it’s the pursuit of independent journalism. But independent, how? And from what?

The First Amendment of the U.S. Constitution already guarantees the freedom of the press from government interference. The first independence of journalism comes from the protection of political influence.

Representatives of both newspapers mentioned above, NY Times and WSJ, made it clear that opinion editorials and news don’t touch. They work separately and they don’t influence each other. Opinion editorials should not be considered as a guide to understanding the journalistic content of said papers. The second independence comes from opinion.

Even when free from government and editorial influence, every media outlet is owned by a company that needs to be profitable in order to exist and keep operating. Newspapers need subscriptions or circulation, websites need good metrics, TV and radio stations need an audience. Media companies in Argentina work like that. They will prioritize content based on its capability to generate ratings, clicks or subscriptions. TV will even change the course of its shows based on live ratings – or minute-to-minute ratings, as Argentinians call it. If a live report or a previously taped piece of news is not performing well, producers will end them as soon as possible and will change the product on air.

When asked about the influence of the need for ratings, circulation and metrics, representatives of NBC, WSJ and NY Times said the same: journalists and producers are not conditioned by these. Dan Baquet, executive editor of the NY Times, explained that they choose the content of the front page and so far they’ve been lucky enough to have matched their decision to the people’s choice, according to the metrics. But, he added: “Even if people were losing interest in the Ukraine war, it would still be at the top of our website.” In the same direction, Meghan Rafferty, producer of NBC Nightly News with Lester Holt, said she gets the show’s ratings two days later.  The third independence of journalism is from the need to generate consumption.

Last but not least, news companies rely on advertising and sponsors to invest in their work. Other companies that choose a certain media outlet to advertise might get the idea that money buys them immunity to journalistic investigation. It certainly does in corrupt countries. Every media we visited had an example of how the advertising money didn’t affect their work.

Neal Lipschutz, deputy editor in chief of the WSJ, did an investigation in 2016 on the startup Theranos – a supposedly revolutionary technology for drawing people’s blood to diagnose diseases. One of the investors in what turned out to be a fraud was one the owners of the paper. The case of ProPublica is also interesting: They receive money from donors, but all the donors get is a notification if the investigative team is going to publish an investigative report on them in order to ask for comments. Journalists work independently from ads and sponsors.

Journalism might be as independent as it seems. Perhaps next week we can discuss other ways journalism can still be influenced and how.