Lesson for all as US schools think again

Published in The Australian newspaper, September 1 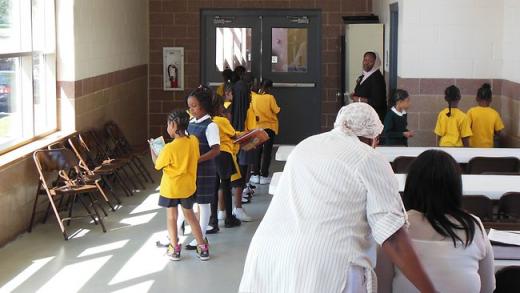 THERE’S a crisp intensity inside the kindergarten class at Mastery, a new charter school in Minneapolis that’s turning stereotypes about demography and destiny on their heads. In a room adorned with pictures of Martin Luther King and Jesse Owens, two teachers circle 21 little boys as they practise sitting up straight and making their way to a carpet where they’ll read a book. “We are college-bound scholars, and I need 100 per cent,” says one teacher.

There’s no slouching or horsing around here. “Sit up and SLANT,” says the teacher, and the boys, all five years old and all black, bolt upright.

The place is heavy with unwieldy acronyms. SLANT stands for Sit up, Listen, Ask and Answer Questions, Nod your head, Track the speaker. It’s a skill set drummed into the kids from day one and they’ll carry it through their years at the school.

The task may be too much for young Treyvon, whose attention begins to wander. He foolishly starts talking to a mate. “Do you need to go back to the ‘take a break’ chair?” his teacher asks. He stops immediately.

Eventually the boys get the hang of sitting, then standing in an orderly fashion and there’s high praise for them.

“That’s what we do at Mastery – we go until we get 100 per cent. We are scholars going to college.”

While five years might seem a little young to be focusing on sending a child to university, a college education is the expressed goal for every child who attends the Harvest Preparatory Academy, really a cluster of five schools, including Mastery, which cater for about 1000 students from kindergarten to Year 8.

They are run by Minneapolis-based educational pioneer Eric Mahmoud, whose charter schools, publicly funded but run independently, is closing the achievement gap in Minnesota, a state where it was the among widest in the nation. Almost all the students at his Minneapolis schools are African American and 90 per cent qualify for a “free or reduced lunch”, meaning they receive financial assistance to attend school. The school has a big migrant community, reflecting the recent influx of families from Somalia, Ethiopia and Eritrea. On the day I visit the school, 10 students are in care facilities because they are homeless.

But the students outperform the state average in maths and reading in every grade, and the latest estimate is that about 80 per cent of the kids who have been at the school will go on to some kind of college. It’s an incredible achievement.

Mahmoud gives three reasons for their success: “Belief, time and data.” He explains belief: “We are completely confident and we completely believe that our children can achieve academic success at a very high level. When it doesn’t happen we look in the mirror.” Time is a longer school year and longer day, allowing more support for the students. And the data is where the magic happens.

Callie Lalugba, chief educational officer and principal of Harvest and Mastery, says data-driven instruction is at the core of the school’s academic success.

“About four years ago we experienced something that was very traumatic to me. We had been doing our regular own thing, not talking about data as much, and our scores plummeted and our hearts were broken.

Charter schools are authorised by state education authorities and are accountable for student achievement. So the school’s leaders looked around at the methods that had been most effective in increasing results in other urbanised African-American communities, and they chose data-driven instruction as their modus operandi.

The students are tested each week in maths and reading, and, depending on their grade level, science and social studies. In addition they also have an “interim assessment” every six weeks, with tests on the all the material covered in the previous weeks and in the earlier part of the term. By the end of the school year, the tests are long and cover a vast range of material. The tests arm the teachers with information about what the students are learning or struggling with, and allow them to plan intervention when students fall behind or share techniques that work.

Lalugba say the extended days and school term make the data-driven teaching possible. There’s a year-round calendar from August to July, and the day starts at 7.45am and finishes at 4.45pm, except on Fridays when the day finishes at 2pm. It gives the students about 35 per cent more classroom time than other schools.

“The reason we do an early release on Friday is so that we can spend time with teachers talking about data. We sit in clusters of grade-level teams and we talk about what’s happening and that’s where the power happens because then teachers can talk to each other and say, ‘Well, what strategy would you use to help this student or your group of students be successful on this particular standard?’.”

The tests are created by the teachers but are in a format similar to the all-important Minnesota Comprehensive Assessments, the reading, writing and mathematics tests that measure and benchmark the school against the state’s academic standards.

Once the school identifies kids who are falling behind on the test, teachers organise “interventions”.

On Fridays, for those with enough points, there’s a fun Friday party, with pizza, ice cream or a movie. Those who don’t make it go to the “not yet room”, which is one step up from the “no fun room”. The school makes sure that the fun room is loud and happy and the other kids can hear it. It’s proven a highly effective motivator.

“We don’t believe that you are born with a certain intelligence and that you can stay there.,” Lalugba says.

“We want students to complete college and come back and help your community and have impact on your community. They are constantly hearing that from the time they get into kindergarten up to the eighth grade.”