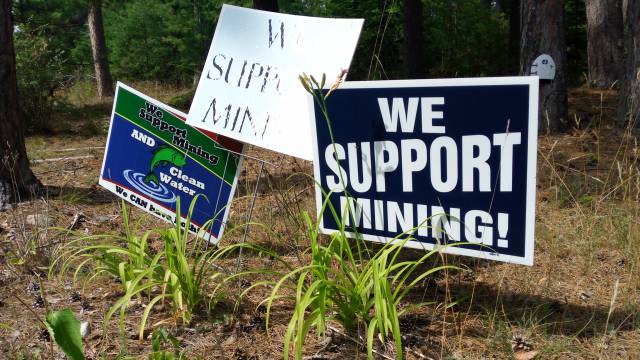 Lessons from Ely: Why Nigeria should not neglect environmental concerns as it kick-starts exploration of solid minerals

The trip to Ely, Minnesota was my first encounter to with rural America. To be honest, I had not had much of an encounter with America itself. I had only arrived the country the first time just over a week ago. And my encounter had been mostly limited to the pleasantly choreographed tours around the twin cities of St. Paul and Minneapolis by the wonderful  of the World Press Institute (WPI) fellowship. I had only gone out once on my own to a nearby Walmart to buy groceries.

The trip to Ely was also particularly interesting to me because I was earnestly looking forward to seeing what life in rural America looked like, having spent some part of my teenage years in a rural community in Lagos.  I like making comparisons. I have come to believe that most big cities around the world are essentially alike – a core, made of huge concrete edifices, mostly fenced by affluent suburbs, with a mix of undesirable slums pushed further away or hidden from view like piles of used dishes after a feast.

So, Lagos minus 17 million people, the chaotic rush hour traffic, and Keke Napep (tricycle popularly called tuk-tuk in some parts of the world) would not be much different from the Twin Cities.

I had not spent time in rural communities in any other countries I had visited before so I was eager to see how rural America compared to rural Nigeria. There was not much comparison to be made.

Rural America was not the neglected poverty-stricken, hopeless settlements that rural Nigeria is. One could move back and forth from urban America to rural America without the degraded standard of living that such a movement in Nigeria would have automatically elicited.

I tried to imagine how things would have been different if politicians back home could be made to see the benefits of developing their rural communities but the picture of Kano State governor, Abdullahi Ganduje, commissioning a hand pumped borehole early this year kept popping up in my mind. I had no intention of getting depressed so turned and mimicked Marina, the fellow from Bulgaria and Natalia, from Ukraine, who were speaking Russian inside our van. The ensuing laughter was therapeutic.

Ely was a beautiful town of 3,500 people sheltered by forests of tall pines and several lakes. Ely was old money. You know this as soon as you drive into the town. Its picturesque setting provides the perfect summer getaway for wealthy Minnesotans, who own beautiful lakeside cabins inside the woods.

I didn’t have to wait long before I found out the source of the old money – mining.

A resident, Hans Olsen, 73, told me that buried under the pines of Ely is huge deposits of copper, nickel and 20 other minerals.

“At its peak, two-third of all the iron ore in the United States came from Ely,” he said.

The Pioneer Mine, which opened in 1888 was forced to close in 1967 due to the introduction of new steel-making technology where oxygen was directly shot into the steel via ceramic lances thereby ending the demand  the richly oxygenated  found in Ely. However, by the time it closed the mine had shipped 41,112,587 tons of iron ore.

In 2015, many inhabitants were filled with  of the return of the town’s heydays after Twin Metals LLC, owned by Chilean mining conglomerate, Antofagasta Plc, announced it was considering revisiting an underground mine near the Birch Lake, southeast of Ely, where large deposits of copper and nickel have been found.

The announcement had caused a crack in the relationship between of local Ely politicians and residents, who wanted the mines back and state politicians and environmentalists, who feared that the return of sulfide mining in the area may destroy the forest and contaminate the pristine lakes in the area.

John Seliga, who worked at the Pioneer Mine, from 1957 to 1966, six months before the mine was closed, said the concerns about the resumption of mining in the area were unfounded. He added that if anything at all there  now technologies to stop any environmental hazards that may result from mining in the area.

“The mining company (Oliver Mining Company, a division of US Steel) allowed you to go to college. As long as they do it right there shouldn’t be any problem,” he said, his voice overflowing with nostalgia.

Similarly, Seraphine Rolando, picker/historian, who conducted the WPI fellows on a tour of the Pioneer Mine, said the state of Minnesota maintained the highest environmental standards you can find anywhere. He doesn’t see the reason why the anti-mining people are worried.

“At this stage, the mining company is only testing to see what can be found. But it would eventually happen because there is a lot of jobs to be created.

Job creation and the prosperity of the town was also high on the mind of the Anne Swenson.

Swenson was probably referring to a 2009 study by the University of Minnesota, Duluth. The study revealed the enormous impact of that the return of mining in northern Minnesota.

The Study, “The Economic Impact of Ferrous and Non-Ferrous Mining Study on the State of Minnesota” found that Iron mining helped contribute $3.1 billion to the state’s economy in 2007 and helped support more than 10,000 jobs. Iron mining paid $148 million in state and local taxes in 2008, based on 2007 production levels. Of that amount, $46 million was used to supported local schools, $11 million supported the University of Minnesota and what was left was spent on mining communities.

As she drove me back to her lovely cabin on Eagle Nest Lake, Cynthia Stokes, 83, said she believed that the numbers pro-mining people of Ely and throwing around are exaggerated.

“Usually, the company goes away after five or six years. It could create negligible jobs and pollution will stay for a long time,” she said.

However, she added that she somehow understands the need to kick-start the economy of Ely and as a someone who only spend the summer in the town she doesn’t think she qualifies to tell the people what they want.

I think Nigeria has a lot to learn from the arguments for and against mining in Ely. As the federal government moves towards the exploration of solid minerals as an alternative means of revenue in the face of cascading oil prices, I believe some of the arguments going on in Ely should be replicated back home. But unfortunately, I do not see any of those. The government seems to have made up its mind and unlike in Ely are forcing its decision down the through of the communities where these mining are expected to take place.

All I have read is about how much the government stands to make. Very little, if any, attention is being paid to the impact mining would have on the environment and on the lives of the people in mining communities. This is most unfortunate because it seems we have not learned from the havoc wrecked by oil exploration to the rich creeks of the Niger Delta. Neither have we learned anything from widespread deaths due to lead poisoning in Niger and Zamfara States.

In Ely, the people are part of the debate. Even those in support of mining are instating on the highest safety standard. To avoid the debacle that the Niger Delta has since become, the Nigerian government should copy this model.