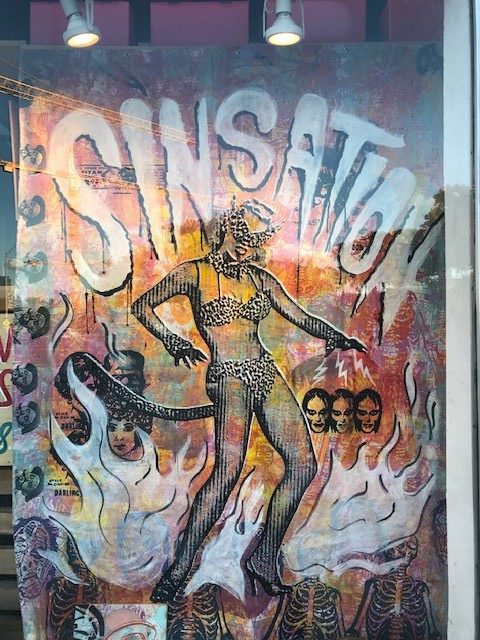 “I don’t appear as myself, but I am all of the Deadly Sins in a way, as you all are, too.” This quote by artist Paul Cadmus (1904-1999) appeared next to his series of paintings depicting the Seven Deadly Sins at the Metropolitan Museum of Art in New York.

Especially the painting portraying Lust has stuck to my mind (unfortunately I can’t publish my photo of the painting here, as there are copyright issues.) It captures the many controversial feelings that people in most cultures have about sexuality: frenzy, ruthlessness, shame, a feeling of losing control. All this has been spinning in my mind while observing the Brett Kavanaugh spectacle.

Several question repeat themselves in my mind: Why is sexuality such a difficult and taboo-ridden area of life in the USA even today, in the year 2018? Why is date rape still such a big problem at US schools? Why are women still treated as the suspects in sexual assault cases (and this goes for my own country Finland too)?

A few years later, in middle school, I had to deal with boys grabbing in the school corridor. In those days no one reacted to this kind of behavior. It didn’t cross my mind either to tell anyone. It was just an annoying thing you had to cope with. Many women my age have similar experiences.

Fortunately, in Finnish schools things have gone the right way in recent decades. In the spring of 2017 I attended a parent’s meeting at the school of my then eighth-grader son and we were given a lecture on sex and sexuality. We were told that the eighth-graders were having special sex education classes, because if there is one sure thing that interests and baffles teens, it is sexuality. In the classes they talked among other things about boundaries, your own and those of others. Why is it for example not all right to grab a classmate’s behind even when a powerful monkey impulse takes over?

Demystifying sexuality and talking about it without shame is the only way to help young people deal with maybe the most powerful force in their lives. Watching U.S. Supreme Court nominee Kavanaugh at his confirmation hearing ranting in rage on live TV, obviously filled with shame, I couldn’t help thinking what damage a highly conservative religious sex education can do. Also, the so-called locker room culture around boys’ sports can be blamed for much misery.

President Donald Trump has declared his worry over young men in a statement he made in early October. “It is a very scary time for young men in America, where you can be guilty of something you may not be guilty of,” Trump said according to CNN. “This is a very, very – this is a very difficult time. What’s happening here has much more to do than even the appointment of a Supreme Court justice.”

I agree on one thing with President Trump: this is a very difficult time and what happened in the confirmation hearings had a lot more to it than just the appointment of a Supreme Court judge. On all else we disagree. I interpret that what Trump is claiming is that women are the bad guys here and Brett Kavanaugh was a victim of a political attack. In my view the real trouble is the blatant sexism imbedded in American society. The Kavanaugh case just brought it into clear view.

An easy first step, to save the young men – and especially the young women – I suggest smart sex education for all. It’s really the only way to go. Sex is not a deadly sin, it’s human nature, and we have to learn to talk about it without the shame still attached to it. And as a mother of two teenaged boys I do hope they don’t feel the need to be butt-grabbing, drunken idiots to feel they are real men.