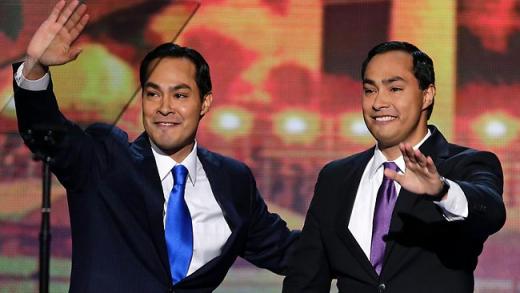 PUBLISHED IN THE AUSTRALIAN NEWSPAPER, SEPTEMBER 6

JULIAN Castro is quick to play down comparisons between himself and Barack Obama, but the personal and political similarities between the pair are there.

Castro yesterday became the first Hispanic politician to give the keynote speech at a Democratic National Convention. Eight years earlier, it was another little-known politician from a key ethnic constituency who took to the podium to deliver the keynote address. That man is now President.

Castro has other things in common with Obama: both were raised by single mothers, both studied at Harvard law school and both focus their “American Dream” messages on advancement through education.

Castro has spoken of his desire for higher office, but yesterday those ambitions were firmly on hold as he readied himself to take to the stage in Charlotte ahead of Michelle Obama.

“I would not put myself in the same league as President Obama,” he said yesterday, well ahead of his speech. “He is somewhat of a unique talent and abilities. I’m a mayor of a city. I’ll try to be myself tonight and do a good job.”

Castro, 37, is the Mayor of San Antonio, Texas, the seventh-most populous US city and the second-largest in the Lone Star state. He is the youngest mayor of any of the top 50 US cities. He was introduced to the convention audience by his twin brother, Joaquin, a Texas state representative who is running for congress.

But the towering figures in Castro’s life were the women who raised him. In his speech and in profiles published nationally yesterday, he told the story of his grandmother Victoria, an orphan from Mexico who was sent to the US as a six-year-old, left school in the fourth grade and worked as a maid, cook and babysitter to give a better life to her daughter, Rosie.

Rosie Castro would grow up to become a political firebrand in the 1970s, a key figure in La Raza Unida, the radical Latina movement in Texas that was dedicated to defending the civil rights of Mexican-Americans and promoting a strong “Chicano” identity.

A single mother from the time the twins were eight, she dragged her boys to farm-worker rallies and polling booths and made them hand out literature. And while they were none too thrilled at the time, Castro says he and his brother “grew a civic conscience” as a result.

“My family’s story isn’t special. What’s special is the America that makes our story possible. Ours is a nation like no other, a place where great journeys can be made in a single generation. No matter who you are or where you come from, the path is always forward,” he told the convention.

The brothers committed themselves to education and went to Stanford University and then to Harvard Law School. They paid their way through scholarships.

They returned to their home town and started a legal practice. Julian is considered the shy one and has a wife and three-year-old daughter. Joaquin, one minute younger than his brother, is single.

The selection of Castro is a reflection of the growing influence of the Latina population, which is tied to the demographic shift that has seen Hispanics account for 55 per cent of the population growth in the past decade.

He told reporters in Charlotte he hoped his story would inspire younger Hispanics.

“As my family story shows, Latinos have been a blessing for the USA for many generations. The future of America depends in part on the success of the Latino community, and this opportunity is just one more signifier of that.”