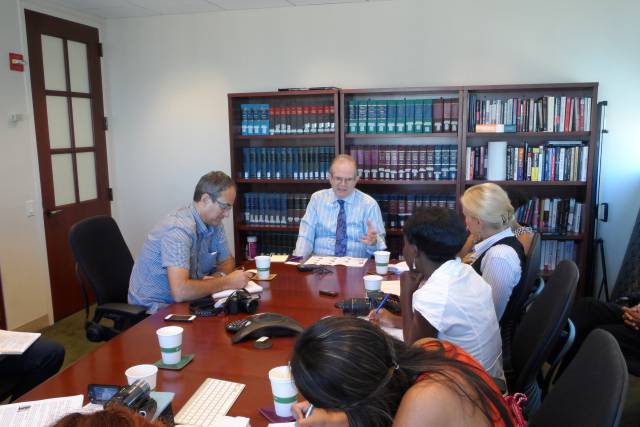 In my previous post, I wrote about how traditional news media in the U.S. are worried.  The Internet has shattered the old business model.  Many are now turning to digital and mobile devices for information.

But in this bleak environment, not everybody is worried.  Our media visits have brought us to news organizations which are unperturbed by all this.  In fact, they are happy, driven, enthusiastic and energetic.  They’re the media start-ups.  A new breed of independent media organizations.  They’re taking advantage of this exciting digital and mobile age.  They’re media groups built from the ground up by journalists raring to break free from the clutches (evil clutches?) of big media – those that are ruled by big media bosses, advertisers, politics, money, readership or ratings stats.

One such news organization is ProPublica, established late 2007.  We met its editor-in-chief and CEO Paul Steiger in their New York office.  Steiger was a long-time managing editor of the Wall Street Journal which had won a number of Pulitzer Prizes under his tenure.

Steiger tells the World Press Institute (WPI) fellows that the broken business model has negatively impacted an important area in many newsrooms: investigative reporting.  “Many newspapers are in the red. Some have closed. Many have reduced staff, and many could not do this kind of investigative reporting.  Now it is important that this kind of reporting come from the nonprofit sector,” Steiger explains. 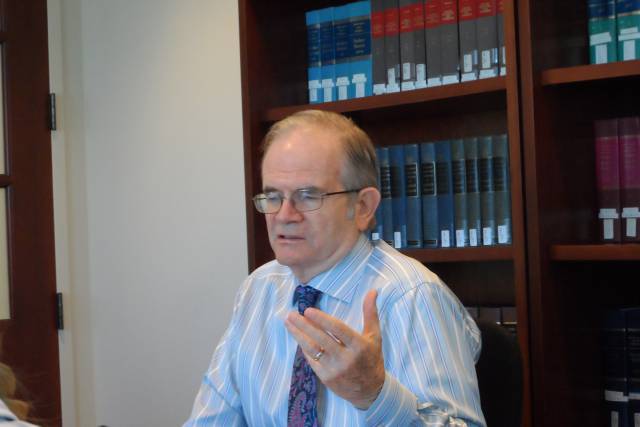 (“We’re prepared to do the tough stories,” says Steiger)

ProPublica is a nonprofit news organization whose mission, as Steiger says, is “to shine the spotlight on abusive power in government, business, healthcare, courts, education, media and nonprofit organizations.”

On its inception, ProPublica raised $10 million in initial funding from a philanthropist!  They employ full-time staff writers at salaries on par with big media organizations, and their journalists have the luxury of time for deep-dive investigative stories that go beyond the scope and depth of the 24/7 news cycle these days     They’re also big into data analysis and reporting, a growing trend in big newsrooms today.  It is investigative reporting that sifts through volumes of data through computer-assisted metrics analysis. 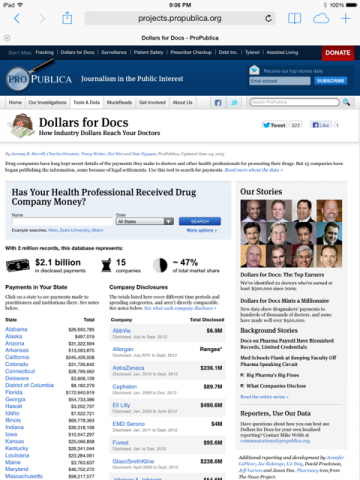 One of the projects of ProPublica is their app called Dollars for Docs.  This app allows users to search for names of medical doctors to find out what pharmaceutical companies have given them money so patients can see if this is influencing the doctors’ prescriptions.

Another independent, nonprofit online media organization we visited is 4-year old Texas Tribune. In a meeting in their Austin headquarters, CEO and editor-in-chief Evan Smith waxes existential about the decision to build this organization.  “What is the role of media?  Are we here just to report what’s happening?  Or are we here to educate people so they are informed to make more productive choices?  [There’s an] old media mentality in this country.  What media business needs is to have the mulch completely turned.  New thinking must take over,” Smith says. 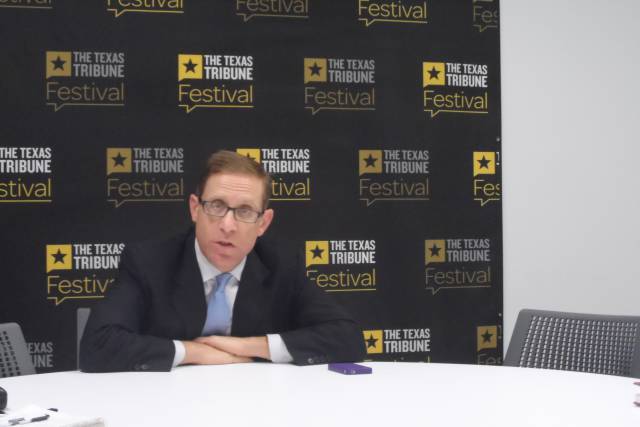 In 4 years, Texas Tribune has raised some $21 million in funding.  Calling it an “intersection of journalism and technology,” Texas Tribune is heavily involved in data reporting on issues like the flaws in the state prison system and public school education.

Politico, based in Washington D.C., is another start-up online and print organization that is making a name for niche reporting (Politico is a profit organization).  National reporter James Hohmann tells us there is a space not being fulfilled when it comes to specialized political reporting in the nation’s capital, and this is where Politico comes in. 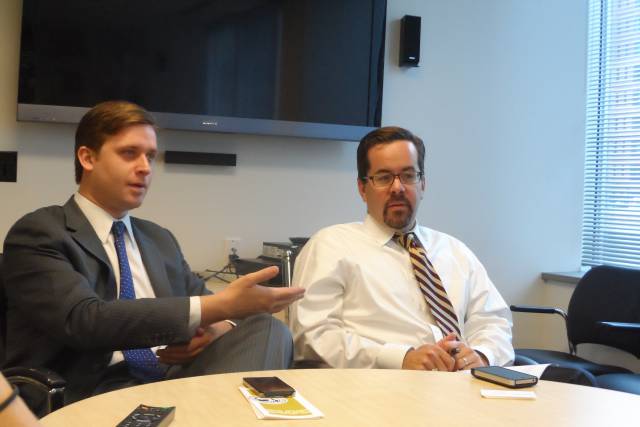 Politico has hired some of the best specialized journalists in the U.S. to write about specific areas that affect American policy-making in defense, healthcare, trade, financial services, education, agriculture, transportation.  It is incisive political reporting combined with digital and mobile savvy. 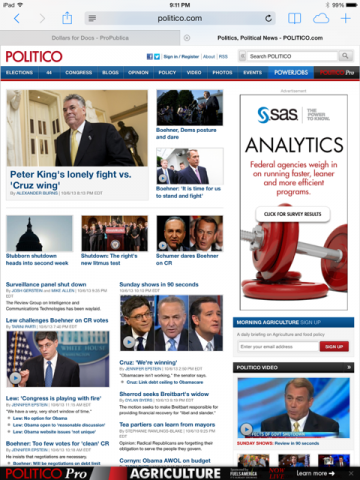 Another phenomenon that struck me is the rise of independent journalists.  We met some of them at the Investigative Reporting Project at the University of California’s Graduate School of Journalism in Berkeley.  The program offers 3 fellowships per year to professional journalists who want to pursue and develop investigative reports for one whole year, for publication or broadcast in national and international media outlets. 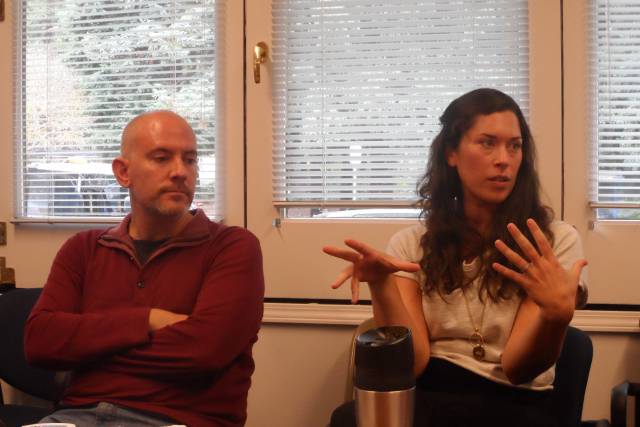 We met the current batch of fellows who are doing interesting work on subjects such as the juvenile justice system in America.  Some of them left their respective media organizations out of frustration because they were given the thumbs-down on their story ideas, not because these weren’t good, but because the subjects weren’t too popular or the process would be too time consuming and costly.

I told the IRP fellows that we also share the same frustrations from time to time, but they are more fortunate.  That’s because in the U.S. there are so many organized fellowships and foundations willing to give thousands of dollars in grants to independent journalists.  One of the IRP fellows tells us that is not always the case.

Caitlin McNally says most of them have to be entrepreneurs as well, in that they have to do a lot of independent fund-raising themselves.  There are even crowd sourcing websites now where journalists can post their story ideas so people who believe in these stories can donate money to fund that project.  The upside, Mcnally says, is that today, “the individual journalist’s name carry more weight than the institution.”

Whether as independent journalists or an independent news organization, the challenge, Politico reporter James Hohmann says, is to keep that “start-up vibe” alive.

I know what he means.  In big media organizations, there’s often a feeling of weariness and exhaustion.  Among start-ups, there’s fire in the belly, a drive to push harder, a lot of leg room to experiment and make mistakes and try again, and a lot of creativity to tap every available potential in today’s digital world.