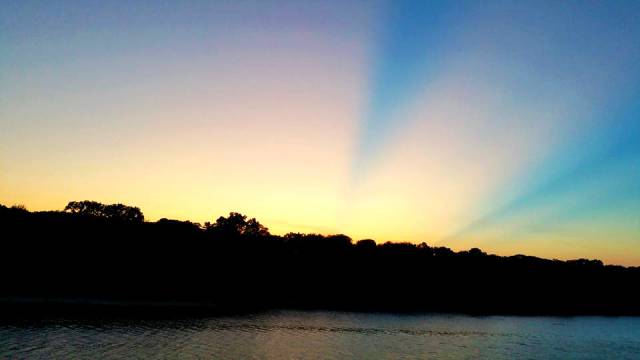 I was sitting by the Mississippi river the other day at the sunset and was enjoying the evening breeze. Though it was my first time visiting Mississippi and Minnesota, the name Mississippi started reminding of my child hood.

Don’t know exactly why, but it could be for the beautiful Bengali translations of Huckleberry Finn and the adventure stories of Tom Sawyer, by Mark Twain that my parents use to read to me when I was a kid. Perhaps that’s when this foreign river Mississippi had became a friend of my ever-so-Bangladeshi self.

As the last light of the day kissed the calm blue waters, the evening was made perfect by a playlist of Mississippi river songs. It was after a song or two that YouTube had started playing “Old Man River”. I had not heard this song before. Little I knew about the surprise that were to dawn on me after a few lines were sung. It was an exact match to one of the all-time classic Bangla songs “Ganga Boiche Keno” by a legendary singer of our sub-continent named “Bhupen Hazarika”!! In utter awe, my eyes stuck to the screen. I felt absolute amazement from the much known melody of an unknown song. Back here in reality, my strange reactions had put my German friend in a fix. “What’s wrong?” – He asked. “This you won’t understand”, I replied.

Later on, after a quick Google research, I found out that in 1950’s Bhupen Hazarika, a young man from Assam then studying at the New York City’s Columbia University came under influence of the legendary blacklisted communist singer Paul Robeson. Inspired by Paul’s civil right activism and the song “Old Man River” Bhupen then created his own song. He named it “Bistirno Dupare, Hahakar Shune”. It had almost become an anthem for the generation’s leftist ideologist of Indian sub-continent. The friensdship that Bhupen Hazarika made with Paul Robeson in the United States had distinctly instilled in him a lifelong passion to create ‘music for millions.

Bhupen Hazarika was an Indian lyricist, musician, singer, poet and film-maker from Assam, India. His songs, written and sung are marked by humanity and universal brotherhood. They have been translated and sung in many languages, most notably in Bengali, Assamese and Hindi. Alike the Bengali representation of “Old Man River”, many of his songs, based on the themes of communal amity, universal justice and empathy, had been revolutionary among the people of Assam and Bangladesh.

Along with the graceful melody of the Mississippi stream, I will remember this little discovery (!) of mine for a long time. The inspiration which creates motivation towards a new creation is certainly beautiful. Who could ever think that Paul Robson’s melody will make a connection to a Bangladeshi who never knew him? And who could tell that the Mississippi would flow even in the vastness of Ganga?

I assume as you all know the “Old Man River” song, Here’s a translated version and YouTube link of Bhupen Hazarika’s version of Old Man River – “Ganga Boicho Keno” – a fair example of proper work Inspiration.

Ganga why do you flow?
The people who live in the vast stretches on your both side are screaming in grief,yet meekly, as always, O Ganga, you!

There are uncountable numbers of uneducated, illiterate, and unfed people,
yet like a blind that cannot see, O Ganga, why do you keep silent ?
With a loud voice of anger, the history is beaconing, O stream of Ganga,
yet why do you not turn weak into strong warriors and complete doers?

The people who live in the vast stretches on your both side are screaming in grief,
yet meekly, as always, O Ganga, you!
O Ganga why do you flow without a protest?

People are self-centred and society is bereft of a character.
O Ganga, why do you not dissolve the lifeless society?
With a loud voice of anger, the history beacons, O stream of Ganga,
yet why do you not turn weak into strong warriors and complete doers?

Why did you stop being a source of action and energy?
Why did you become inanimate?
Why you stopped giving inspirations to lives.

The people who live in the vast stretches on your both side are screaming in grief,
yet meekly, as always, O Ganga, you!
O Ganga why do you flow without a protest?