No-knock warrants: Why advocates are pushing for change?

When officers arrived at her residence, her boyfriend Kenneth Walker believed a break-in was happening and shot at the “intruders”. Officers returned fire, shooting Taylor eight times.

The death of Taylor, a Black woman, has been one of the main drivers of wide-scale demonstrations that erupted over-policing and racial injustice in the United States. 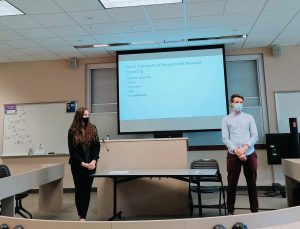 Two advocates of the community justice project- Knock First Minnesota at the University of St. Thomas were presenting their issues during an exchange program with 2022 WPI fellows

“The no-knock warrant creates a surprising situation since it targets a sleeping person and often forces the person to respond to the police officer with force; it creates fatalities,” said Jess Palyan, a law student at the University of St. Thomas involved with the community justice project Knock First Minnesota. Knock First Minnesota was established in August 2020 after the death of Taylor.

The advocates of Knock First Minnesota believe that ending no-knock warrants will give Minnesotans a chance to answer the door.

For context, no-knock warrants were created during the 1970s during President Nixon’s presidency as part of an emphasis on stopping illegal drug sales and use.  Generally, no-knock warrants are used in drug crimes, both possession and distribution, and the theory is a no-knock warrant is necessary to prevent drugs from being flushed down a toilet or otherwise destroyed as police officers knock and announce their entry into the home.

Currently, no-knock warrants can be used in drug possession investigations. In Minnesota, they are used to prevent “destruction of evidence” or “preserve officer safety.”

Advocates are concerned about no-knock warrants because they create a dangerous situation for both officers and the residents upon whom the warrants are served, Palyan said.

According to National Officer Down Memorial Page (ODMP) 13 officers and 81 civilians were killed during no-knock warrants between 2010 and 2016 in the United States.

“When a police officer is killed, it’s not an agency that loses an officer, it’s an entire nation,” said Chris Cosgriff, ODMP founder.

According to the ODMP, four police officers have been killed while serving search warrants in 2019. Of these, all four (Matthew John Rittner, Nicholas John Hopkins, and Jorge Rene DelRio, and Lucas Bartley Dowell) were killed during a no-knock search

For reference, all warrants policies must pass a five-part test. The first four say the policy must: Warrants to be served in daylight hours; Officers to knock loudly and clearly on the door; Officers to announce themselves, identifying themselves as police and specifying their purpose; and officers to wait at least 30 seconds before entering the building.

They said the goal of all of these first four factors is to help guarantee that officers are not surprising people or causing them to panic.

The fifth factor is any policy must require detailed tracking of data related to warrants so the police and public can conduct adequate studies into the effectiveness of warrant strategies and the communities most impacted by them.

“No-knock warrants are supposed to be rare and exceptional,” said Rachel Moran, an associate law professor at the University of St. Thomas.