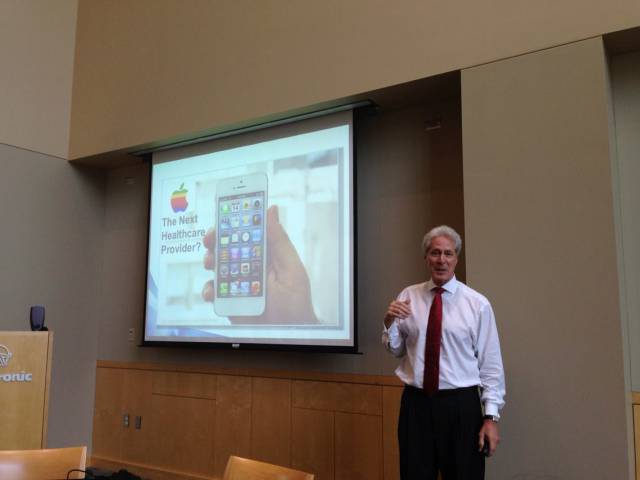 Today was a beautiful day that cheered me up a lot. It was the best time to go to Nationalization Ceremony in S.-Paul, MN right after a great speech of Mr. Steve Oesterle, in Medtronic headquarter in Minneapolis, where I was paralyzed and simultaneously delighted by technical and scientific achievements of Medtronic and personally by Mr. Oesterle.

Later when I came home I put his name to my browser and discovered so many facts about him and by the way have a look one of his speeches on TED. http://www.youtube.com/watch?v=ZiQJIpd2n8k

It was luck to find yourself in the same auditorium with this man! And when I wrote above that today was the perfect day to go to Nationalization Ceremony I meant the speech of Mr. Steve Oesterle about imminent future and how the Medtronic company performs yourself and your mission in the nearest future was the best introduction to Nationalization Ceremony filled up by honor pride to be US citizen.

I hate flattery, I hate to flatter, honestly, but here I don’t know how to describe my feelings differently… We came to Landmark Center quarter to 2PM, a big hall with white columns was full of dressed up people, they were sitting on chairs, many rows, the only 10 sits in the front row were spare, they were waiting for us. 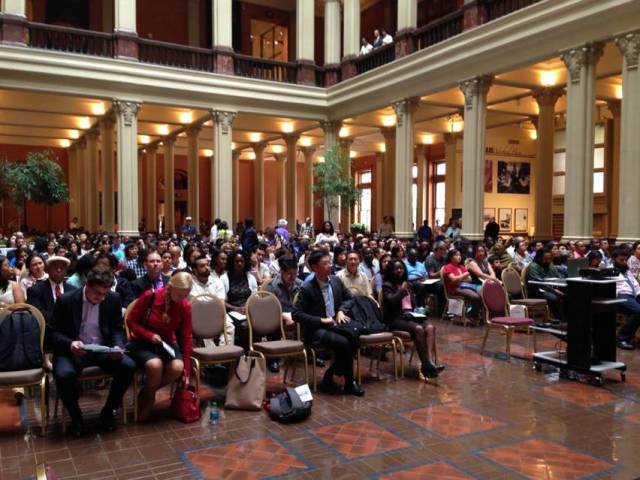 Some people with kids, some with flowers, 208 people from 53 countries around the world overcome their paths to American Citizenship. We don’t know how long did it take for each of them, we don’t know who was escaped from a war, from a dictatorship, who was fallen in love and got married, each path is different. At 2 PM without a second delay the Ceremony started. The Magistrate Judge Jeanne J. Graham from United States District Court had let us before she loves to host this Ceremony and every time she feels emotion, she could pass me her emotion as soon as she appeared front of public in the scene in the center of hall. 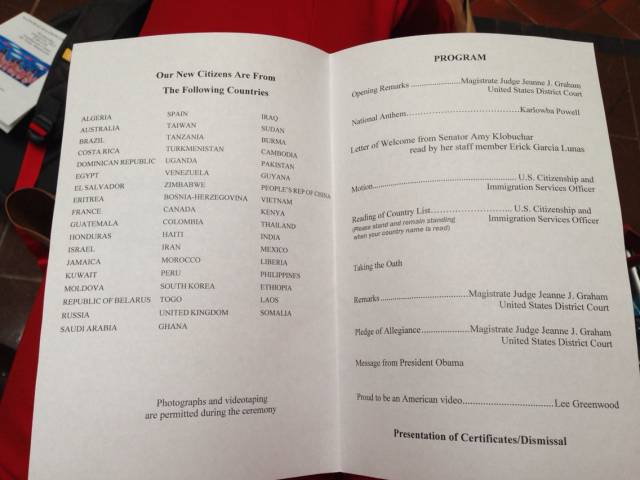 She announced American Anthem and introduced very tall and slim Afro-American Karlowba Powell to sing the Anthem. The audience stood up putting three hundred hands to hearts and all of them started singing, maybe in the first time in their life with full rights for this action.

It was amazing moment; I made my pictures attempting to overcome my personal emotions. After the Anthem the Judge pronounced every country where these new American people came from. 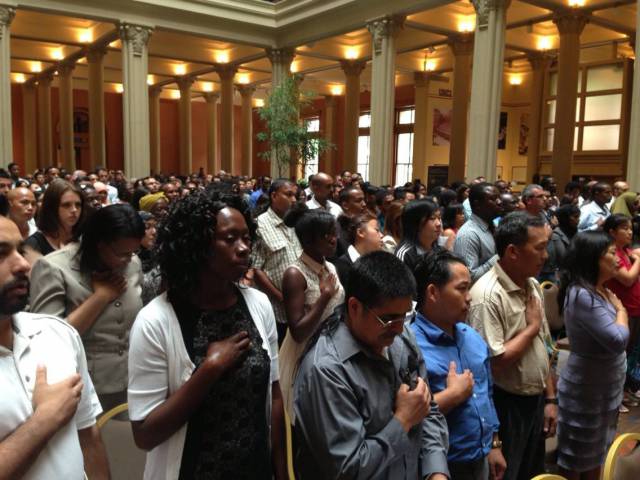 New citizens stood up presenting their origins, nobody stood up twice: from Israel and from Australia. I saw young blonde woman from Belarus, former Soviet Republic, where dictatorship became a regime. I saw a family from Birma, where after 30 years dictatorship is fallen down, it is place where is not Internet yet. I saw man from Russia. I heard jubilance when the Judge said “Somalia” and the biggest group of people stood up. The Judge ‘s speech consisted very based and very important principals of the US, she said about the country that was built by emigrants, she said about unique role of national inherits and multinational impact to the USA, she said about equality, human rights, freedom of speech, religion, press. When I was listening to her I recalled one of my favorite Madonna’s speech from the scene in Moscow during her last world tour: “As you can see here in my stage everybody with me came from different part of the world…from Africa, from America, from England, from Russia…We are Christians, we are Muslims, we are Jews, we are family. We are gays, we are straits, and we are human beings…”

These two ladies, one – Judge in black mantle, other – world famous singer show-off dressed, apparently were pronouncing the same text about human being. And in spite of everything, in spite of imperfectness of our world, in spite of Manning’s Court sentences that appeared the same minutes, their words help me to believe.