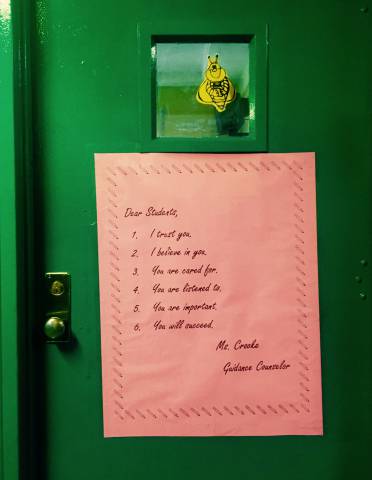 Pink paper on the wall

It was September 2015. After two weeks of holiday I started working on my new documentary. It took me back to the times of the Second World War. My film told a story of a girl – today, an elderly woman – who survived the Auschwitz concentration camp. It was a story of courage, loss and survival in times of war. My protagonist had the rare fortune of being among the very few children to survive the ordeal. One million children died.

The fate of children who are forced far too early to leave childhood has always interested me. Throughout the years, not only have I researched the topic, but worked with children myself. But this very documentary made me think again of Janusz Korczak, who was a pediatrician, an author and a director of an orphanage for Jewish children in the Warsaw ghetto. Despite being offered freedom, he refused, and stayed with his orphans until they all were deported to Treblinka extermination camp. This was because “One’s words,” as he wrote once in a letter to a friend, “have only so much value as one imparts to them by the action of one’s own life.” Janusz Korczak spoke of the need for a Declaration of Children’s Rights long before any such document was created. He compiled the rights that he considered most essential. Some of them were:

The child has the right to love.

The child has the right to optimal conditions in which to grow and develop.

The child has the right to live in the present.

The child has the right to be himself or herself.

The child has the right to make mistakes.

The child has the right to fail.

The child has the right to be taken seriously.

The child has the right to be appreciated for what he is.

Exactly a year later, in September 2016, this story couldn’t seem further away. But a pink sheet of paper on a wall made me think twice.

I believe in you.

You are cared for.

You are listened to.

For me this pink paper was the implementation of the list of rights, that Janusz Korczak wrote more than 70 years ago. And the place I saw it was a place of war. The Ron Brown Academy in Brooklyn is a middle school that serves a population consisting of 80 percent black, 18 percent Hispanic, and 2 percent Asian students. Teaching there is a challenge. Not only because enrollment is going down and subsequently the money, that the school receives from the state. But because there they teach children, who live in times of war. A war at home. Children, who don’t know the meaning of the word “parent”, who don’t have their basic needs fulfilled and who change homes more frequent than they change shoes. It was remarkable to see the effort of the whole school staff to save their future: The personal attitude, the pursuit of solutions for situations, that don’t have anything to do with school education, the belief that “you should teach not only to the test, but to the soul”.

The end of this story is still unclear. Some of the children have already lost the war. But for many more the hope remains, that their rights will be cared for. Because as Korczak once said:  “Children are not the people of tomorrow, but people today. They are entitled to be taken seriously. They have a right to be treated by adults with tenderness and respect, as equals. They should be allowed to grow into whoever they were meant to be. The unknown person inside each of them is the hope for the future.”