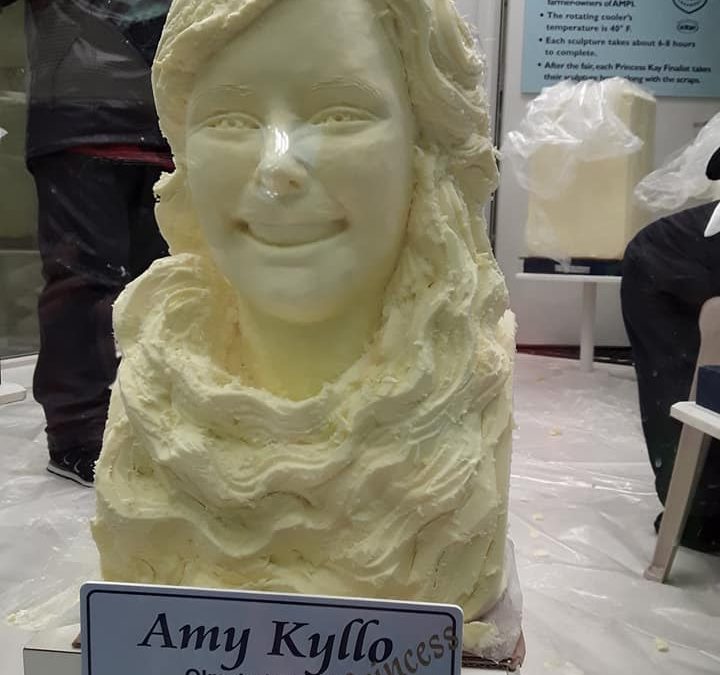 Princess Kay and the Butter Queens

“I’ve always loved princesses,” says Amy Kyllo, a blonde teenager from Minnesota who has just won a beauty pageant – with a difference.

Kyllo was named 2019’s “Princess Kay of the Milky Way” at the Minnesota State Fair, a title given every year to a dairy farmer’s daughter, and now gets to have her visage carved in 90 pounds of butter.

With her curly hair, knee-length demure dress, and slight lisp, the biblical studies student is a far cry from the silicone-endowed beauty queens typical of beauty contests – and she’s passionate about farming. 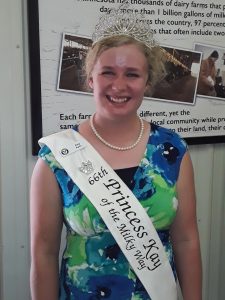 Amy Kyllo was crowned ‘Princess Kay of the Milky Way’ at the 2019 Minnesota State fair, a tradition that has been in place for decades. (Kate Bartlett)

The tiara-wearing teen from Olmstead County will now serve as an ambassador for the dairy industry. Ironically, the dairy industry is feeling the negative effects of President Donald Trump’s trade war despite the fact that large swathes of rural Minnesota voted for him.

Sarah Schmidt, in her 30s, is a former “Butter Queen” who now works for the state’s biggest dairy factory.

“Dairy farmers have been hit very hard” by the current economic climate, she says, and the ambassador-princesses are a good way of promoting the industry.

“We’ve been carving butter heads for over 50 years now,” she notes, adding that the tradition started so Minnesotan farmers could compete with neighboring Wisconsin, which crowned itself the Cheese State.

Hundreds of thousands of people visit the Minnesota state fair daily for its 12-day run, and many watch as an artist carves the butter queen heads using the winner and runners-up as live models.

Finalist Kayla Biel from Fillmore county sits in a revolving glass box as fair goers watch artist Linda Christensen– who has been carving butter heads for 48 years – sculpt her likeness.

It’s forty degrees (4 degrees Celsius) inside the rotating fridge, so she’s paired her tiara with a winter coat and boots. Each head carving takes up to eight hours as the artist whittles away at the butter slab and the princesses’ features slowly appear. 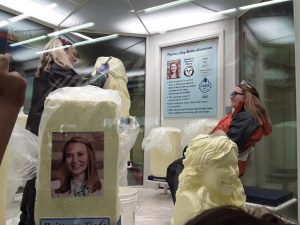 Most of the women later use the butter. Kyllo is going to melt it down for a traditional Scandinavian style potato dish her family eats at Christmas, Biel is going to “donate some to my church pancake supper.”

The teens also often bake cookies out of their butter heads, to send to US troops overseas.

Sarah’s family took a different tack however and at her mom’s instance kept her butter sculpture in a deep freeze. It’s been there for 17 years.

Recently she says, it “had a facelift because it had got smashed on one side.”

While foreign or out of state visitors may find the butter beauty queens an unusual tradition, James Hanson, a construction worker from Minnesota watching the live carving at the fair, says it’s old hat as he’s been viewing the butter heads for years.

“It’s kinda neat they’re taking a different form of art instead of sculpting from rock or stone,” he says, sipping his beer.

He does feel a bit bad for the icy conditions the models have to endure though.

“These poor girls have to sit in there,” he says, pointing at the princess currently posing in the revolving glass box.