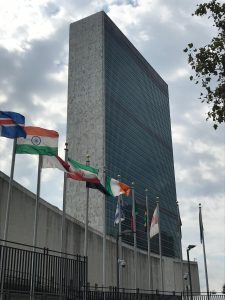 At the United Nations General Assembly, President Donald Trump shot his nationalist message once again: “The future does not belong to globalists,” he said.

Hours before the Democrats announced the beginning of the impeachment inquiry process, the president used the United Nations’ multilateral organization’s New York headquarters stage to attack its nature, and call as usual for further controls on immigration.

It was no surprise, as Trump’s anti-immigration speech has been a pillar in his ongoing political campaign and presidential administration. And controversy remains high with Trump’s continued insistence to build a wall along the southern U.S.-Mexico border.

While the president celebrates on Twitter the progress on the border wall, those hopeful immigrants arriving, especially from Central American countries, continue to pursue the American dream, fleeing violence and poverty, and feeding a debate that appears destined to weigh heavily in the next election.

Trump and his supporters inflame this debate through public speeches like the one Trump gave at the UN, but also through racist comments, like references to Mexicans as “rapists,” or describing those seeking asylum as an “invasion.”

On top of that are the inhumane conditions in which detained migrants are held at the border, as widely reported by various media outlets. And children are still separated from their parents, even though an executive order in 2018 ended this part of the Zero Tolerance policy.

In this context, many questions have been posed, not only about the immigration policies, but also about morality and humanity.

The Heritage Foundation, a conservative think tank in Washington, D.C., echoes Trump’s rhetoric. Mike Howell, senior adviser for executive relations for the Heritage Foundation, and a former oversight counsel for the Department of Homeland Security, describes the relationship of the immigrants and the United States as “parasitic,” alleging that immigrants send their earnings to their families left behind.

This view adds to another that links migrants with crime. “Every day, sanctuary cities release illegal immigrants, drug dealers, traffickers, gang members back into our communities,” Trump alleged.

And, as The New York Times reported, even Gallup polls showed the myth continues to perpetuate: “Almost half of Americans agreed that immigrants make crime worse.”

However, a study conducted in 200 metropolitan areas over decades shows there is no relationship between immigration and crime rates.

Even so, to stop the waves of migrants, the Trump administration implemented policies to deny asylum to anyone that wasn’t previously rejected by another country.

Mexico started to contribute after Trump’s threat of tariffs on bilateral trade.

“Mexico is helping to stop people, not because they thought they owed us a favor out of the kindness of their hearts, but because Trump incentivized them,” Howell explained. “The Trump administration is of the view that every tool in the toolbox can be used for the immigration crisis.”

Saying people are fleeing for economic reasons, not violence as they say, Howell added: “There are many safe places in Mexico where they can stay.”

Official data shows the murder rate in Mexico hit a record of 35,964 in 2018, and homicides continue to climb.

Jorge Ramos, a journalist for Univision in Florida who was born in Mexico, believes the United States “has an obligation to accept the vulnerable, both if they’re fleeing violence or looking for economic opportunities,” adding that immigrants help support economic growth in the country.

According to many economists, immigration has been a pillar of American growth.

Thomas Friedman, an opinion columnist at The New York Times, recently studied the economic growth of U.S. cities. The most economic progress was found in those cities that successfully integrated immigrants into the workforce.

“Since Republicans have completely caved to Trump’s craven exploitation of immigration as a wedge issue, the country, as usual, needs the Democrats to be the adults and put forward a realistic, comprehensive approach to immigration,” Friedman wrote recently. That implies, he concludes, “a high wall with a big gate.”

The debate is still open, and full of false statements. Hopefully, a different government will address migration in a more serious and humane way. And prove that maybe the future does belong to globalists.