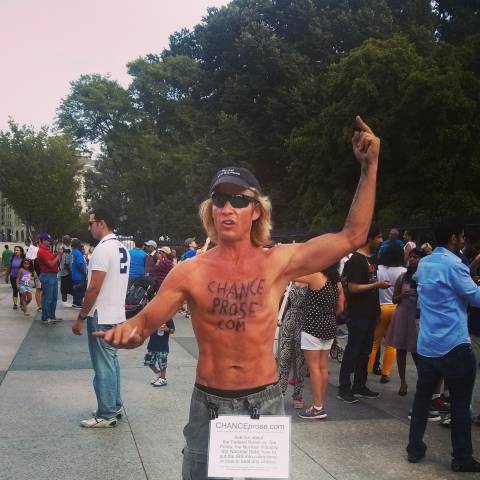 Scenes from the Fellowship so far

This guy just stands outside the White House flipping the bird to the President presumably. We ccouldn’t quite work out what he was protesting against – a whole range of things including the right to not pay any taxes. Oh, and I am not making this up, his name really is Chance Camelslayer Addison. The Camelslayer bit was trademarked. For most of us, it was just a funny sight, but it fellow fellow Shalailah Medhora thinking and resulted in this blog post about the privilege of protest – worldpressinstitute.org/wpi-reports/blogs/shalailah-medhora/2014/09/09/privilege-protest 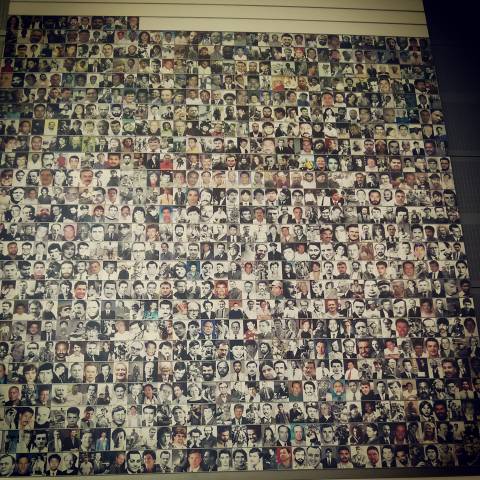 This is one part of the incredibly moving Journalists memorial section of the Newseum in Washington DC. South African fellow Camilla Bath wrote a moving piece about her experience in the Newseum. Read it here: worldpressinstitute.org/wpi-reports/blogs/camilla-bath/2014/09/04/dangerous-game 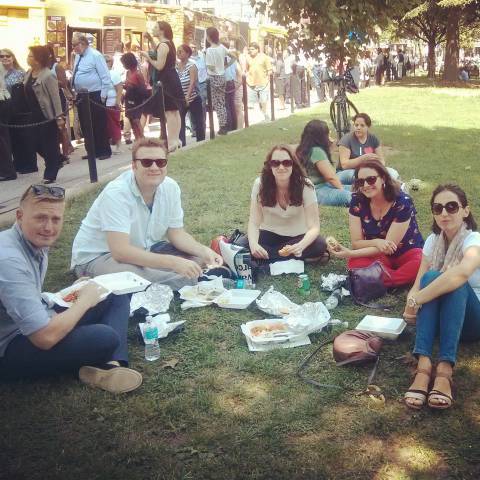 The Fellows take a much needed lunch break between meetings in Washington DC. This entire park was surrounded by food trucks, it was a great experience specially for those of us who had never eaten from a food truck before. 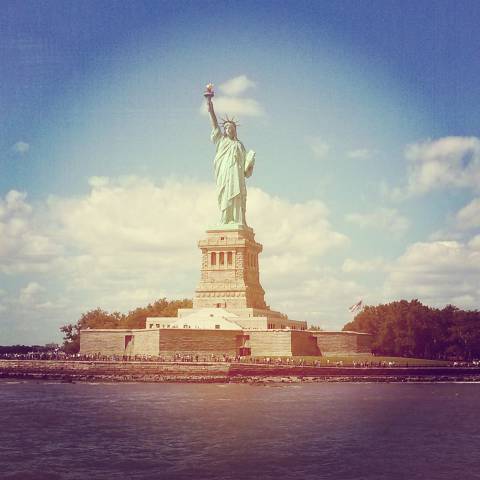 After spending a harrowingly emotional morning at the 9/11 memorial in New York, some of the fellows got on to a ferry and paid a visit to this lady. We were all in need for some hope and good cheer and New York delivered in style. 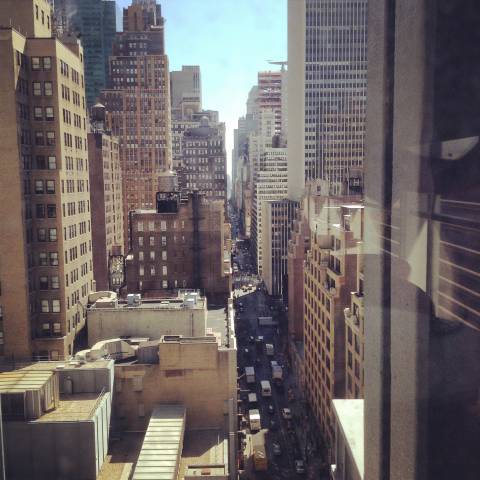 This is the view from the top of the New York Times building in Manhattan. Attending the morning huddle at the Times was one of the highlights of this trip so far. It was exactly as I had imagined it would be, but only better, a room full of great editors, and I am guessing some reporters shaping the news agenda for the day. The next morning the front page of the Times looked exactly the way they had planned it would at 10 a.m the morning before! It was amazing. 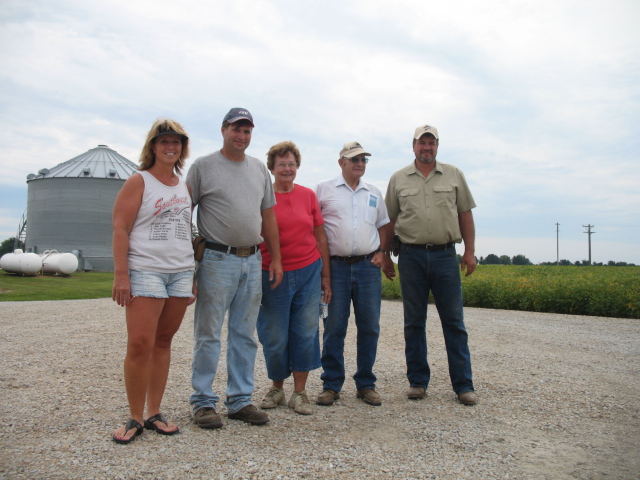 I loved Manhattan, but I loved Williamsburg in Brooklyn even more. It had such a relaxed vibe, and even the people were kinder when you stopped them to ask for directions. We ran in to a great Turkish-American guy, and had a long chat with him only to find out that he worked in television too. What are the odds? The enitre neighbourhood was full of beautiful grafitti. This one is my favorite. 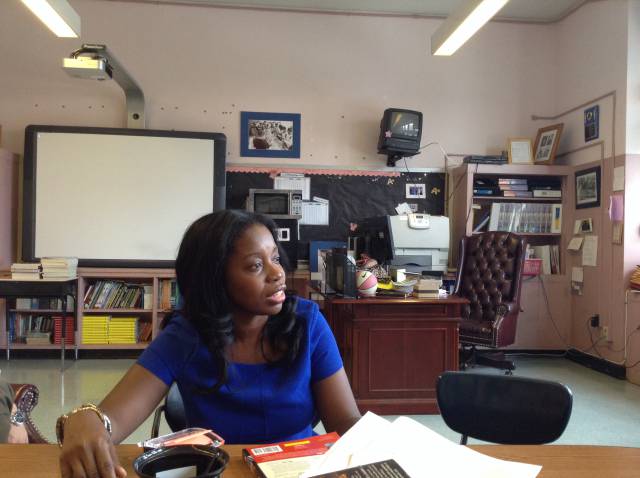 Celeste Douglas, the principal of the MS 57 middle school in Brooklyn is one of those amazing teachers that come along only once in a lifetime. A conversation with her left all teh fellows impressed by her modesty, and aspirations. She has been Principal for 9 years now, and has really managed to turn the place into a safe environment for students. She told us many stories – her’s one of them. “It’s easy to get a gun as a teenager in New york, it makes you feel brave and strong. My first month here, an 11 year old bought two loaded weapons to school. He wasn’t planning on using them, he was just carrying them to give to his brother. This was pre-columbine, and Iw as as shocked back then, but when I think about it now, it’s just scary. The hardest thing I had to do was make the decision that I cannot let him come back to my school, because that would send out the message that it’s okay to bring weapons to school. I reported him to the authorities and he spent two years in the juvenile system. 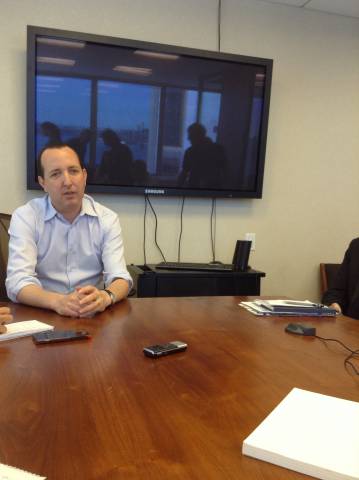 Ben Wizner is one of Edward Snowden’s attorneys and a member of the ACLU. He spent a long time talking to us about Snowden, and told us that they keep a robot in the building that Snowden operates remotely when he wants to communicate with them. So every once in a while Snowden (or his robot avatar) will walk around the office chatting with everyone! Unfortunately we did not get to meet Robo Snowden! 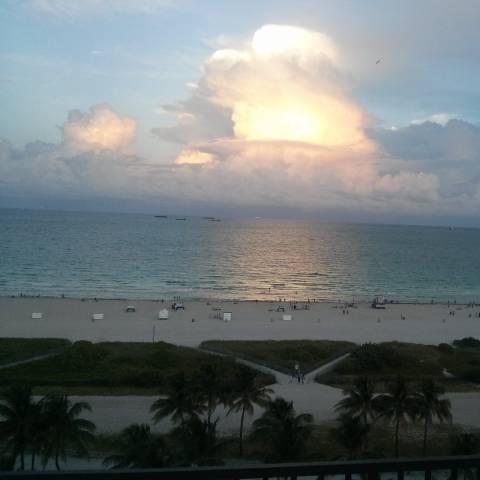 This is the view from the Penthouse at Hotel Netherland in Miami. We just eneded our second free day here and its been most relaxing after the gruelling two weeks in DC and New York. Tomorrow, the madness begins again with a meeting at The Miami Herald.