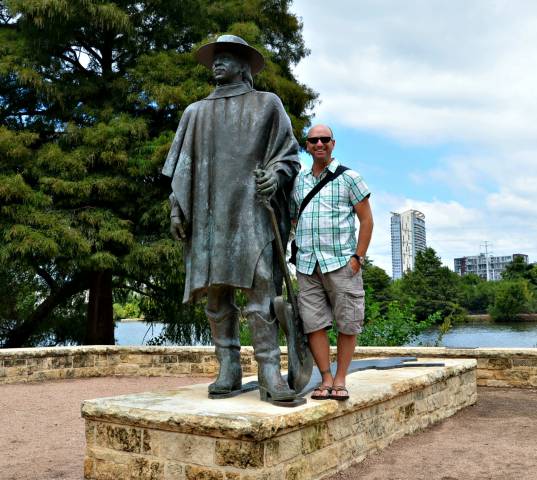 Tel Aviv to Lake Wobegon: Fallin’ in love with Austin

The moment I landed in Texas, it just felt right. Not exactly like being home, but some sort of comfortable feeling took over.

I guess it’s understandable. I was a kid here for a few years. I left Israel at the age of 3 and came to Dallas, where my father did his PhD in archaeology. After that, we went back home to Haifa.

I don’t remember Dallas very much. I do remember going to a Jewish school, where half of the day was in English, and the other half in Hebrew. I remember wearing a kippa, tsisit and cowboy boots to school.

These were the late 70’s and early 80’s, when the Cowboys were big and people were wondering who shot J.R.

I also remember a story my mother loves to tell, about shopping for kosher food in a Dallas supermarket. She couldn’t find the kosher section, and asked the nearest worker in the aisles, who proceeded to rub his chin and yell out to his colleague: “Hey Jim-boy! Y’all know where the Jew food is?”

I suppose things have changed a bit since then.

Maybe a lot. It’s been over 30 years since I was last in Texas. And here I am, walking the streets of Austin, but as I said, feeling kind of at home.

I’m walking with my colleagues Veronica and Paul towards the river. We stop to look at the map for a moment, and suddenly I see something on it that makes my heart skip a beat. Just across the river, it says there’s a statue of Stevie Ray Vaughan.

Now, I have every album SRV put out before he died. He’s my favorite blues artist – or basically any kind of artist.

Here are two of my favorite songs, Texas Flood (in this clip he plays behind his back!), and Little Wing (a cover he did to Jimi Hendrix – better than the original).

So, Austin was off to a good start.

I knew Austin was supposed to be a cool town, but I have to say it exceeded my expectations. First of all, the food is amazing. From some amazing bbq joints, to Thai, Japanese, wonderful Tex-Mex. I even had my first vegan meal from a typical Austin food stand, and it was fantastic.

The music coming out of the bars on 6th street is amazing – blues, rock and country and more. On Saturday night, 6th turns into a sort of Bourbon St (without the legal alcohol on the street) with thousands of people in the middle of the street hopping from bar to bar. It reminded me a bit of Carnival I saw in Salvador do Bahia.

Before conducting some of my own bar hopping, I managed to get a ticket to a local show that is apparently an Austin institution, Esther’s Follies – and it’s probably the most I’ve laughed in a long time. It was a perfect blend of comedy, slapstick, political satire, music and magic. Very slick production, with some very talented performers.

I left Austin with a feeling that I wanted more. And that’s a good way to leave a town, I believe.