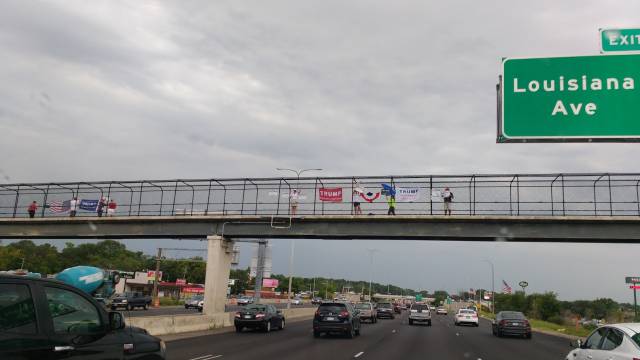 The Guys on the Bridge and the Billionaire

It’s a gray day afternoon and the weather app on my cell phone forecasts a strong rain in the following hours. Over a pedestrian bridge at 35 highway a group of some ten Trump supporters wave campaign flags and show signs with the slogan “Make America Great Again.” Some of them are unsuccessfully asking drivers to honk. They seemed excited nonetheless.

The real estate mogul and former reality TV star creates an enthusiasm that can hardly be expected from the supporters of his contender, a well-known political figure, former Secretary of State and ex-FLOTUS, Hillary Clinton. Most studies have shown that core Trump support rests in white people with no university education.

He doesn’t promise any measure that could directly influence their income. To the best of my knowledge, most of his economic program will benefit big business, not lay people. But he does promise to build “the most beautiful tall wall, better than the Great Wall of China” over the south border.

His irruption in American political landscape comes at a time of divisions and confrontations, at domestic and international level. At home, his campaign targets a shrinking white majority that feels in one way or another constrained by immigration and diversity.

“White supremacism has always been there, but political correctness has kept it out of sight. Trump campaign have brought it to light”, St. Thomas political science professor Renee Buhr argues.

A video of unfiltered voices from a Trump campaign published by The New York Times seems to support her view: all kind of racist remarks are heard. “Fuck political correctness”, shouts one of his supporters confronting a group of anti-Trump protesters. Another one has a t-shirt that says: “Fuck Islam.” It goes on and on. 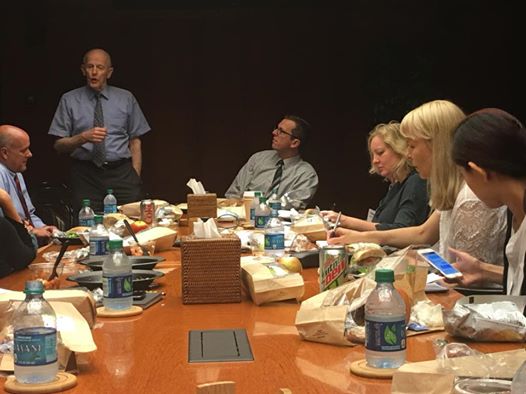 A day after our encounter with Trump highway enthusiasts we met a very different GOP candidate supporter. Billionaire Stanley Hubbard, head of the biggest media corporation in Minnesota, Hubbard Broadcasting, said to us that he thinks “he is a jerk.”

He is funding Trump’s campaign nonetheless. In fact, later he would be attending a fundraising meeting in Minneapolis. Hubbard supported several Republican candidates to challenge his candidacy during the primaries. “None of them made it, unfortunately.”

His main reason to fund Trump campaign is “regulation.” He thinks that this is the candidate that will appoint judges in the Supreme Court more in tune with his anti-regulatory ideas.

On the other hand, he expressed a strong disbelief in global warming science and thought Hillary will follow president Barack Obama’s environmental policies.

Hubbard let us know that he had an advice for Trump and he planned to tell him that night: “Flies won’t get into your mouth if you keep it closed.” The guys on the bridge probably think otherwise.