The return of partisan journalism

In my home country, Finland, the great majority of newspapers are non-affiliated and independent. Party newspapers and reporters are a curiosity.

That is why I have been surprised to notice how openly partisan many American journalists are. Some of them don’t seek journalistic objectivity or even try to hide their personal opinions and biases from their audience.

As I hopped from CNN to Fox News on the day that Speaker Nancy Pelosi announced the impeachment inquiry of President Donald Trump, I felt disoriented. The journalists seemed to be talking about two different events, even though they were covering the same story.

Have we returned to the party press era?

One example of an American journalist who doesn’t consider himself objective is news anchor Jorge Ramos. He works for the Spanish-speaking television network Univision.

“My role is to confront power, not to stay neutral. If I don’t ask these questions [to President Trump], no one else will,” Ramos told the World Press Institute fellows in Miami.

He was removed from Trump’s press conference in Iowa in 2015 and has ever since opposed his policies.

Ramos, who is originally from Mexico, was shocked by August’s mass shooting at a Walmart in El Paso, Texas. Twenty-two people died. The anchor says that he and Univision represent a minority that is currently under attack.

“When you have a president who is a racist and a liar, it is time to redefine your role as a journalist,” Ramos said. 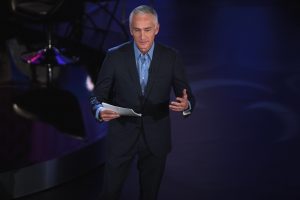 “Jorge Ramos” by Gage Skidmore is licensed under CC BY-SA 2.0

Edward Wasserman, dean of the Graduate School of Journalism at the University of California at Berkeley, says that students often arrive on campus with strong opinions and worldviews. They are passionate people who want to change the world. But how to balance passion and objectivity?

“We tell them they have to be prepared to get disappointed with the truth. You need to be able to report it even when it breaks your heart.”

According to studies, there’s still a demand for objective journalism. A Pew Research Center survey released in 2018 showed that 78 percent of Americans say the news media should never favor one political party over another. However, only 47 percent say their news media do very well or somewhat well at reporting about politics fairly.

Being fair and objective is far from easy, and sometimes even the most trusted papers make mistakes. In August the New York Times received criticism for its headline: “Trump Urges Unity vs. Racism.” The article was about the president’s speech after the mass shooting in El Paso.

The headline was in line with what the president had said, but Trump also has a long history of using divisive language that some people regard as hate speech.

Times Executive Editor Dean Baquet has since acknowledged that it was “a bad headline.”

However, during our visit to the New York Times, Baquet told us that he feels that it is not the paper’s role to be the leader of the resistance against President Trump. By doing so they would align themselves with the political opposition, which will one day rise to power again. Where would the paper stand then?